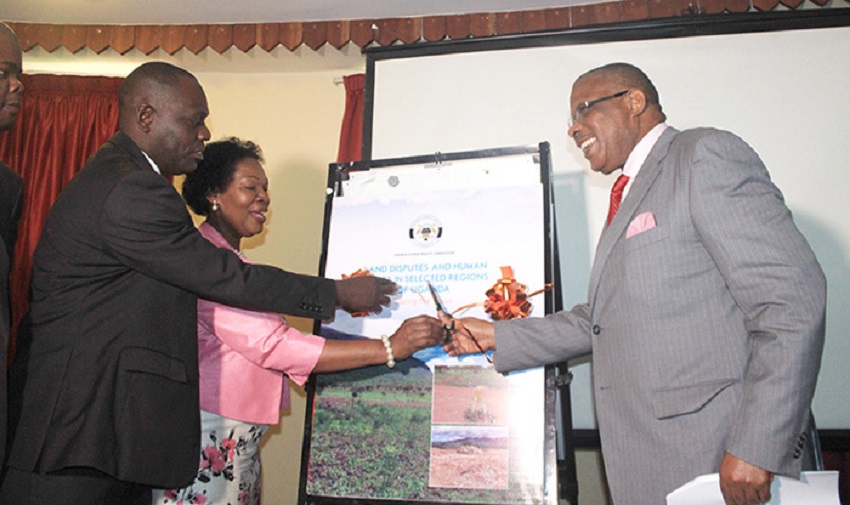 The aim of the study was for the Government to gain a deeper understanding of the underlying issues behind land disputes and the related human rights implications.

PIC: Meddie Kaggwa (third-right) the chairman of Uganda Human Rights Commission and other members during the launch of the report on land disputes and human rights in some selected regions of Uganda. Left is Dr. Zahara Nampewo, next is Hon. Gilbert Okanya and next to Kaggwa is Hon. Jova Kamateka. (Credit: Meddie Musisi)

REPORT- Almost half of land holders in Uganda are facing ownership related disputes, a new report by the Uganda Human Right Commission (UHRC), has revealed.

According to the report, which was released on Thursday at Golf Course Hotel, the disputes are orchestrated by family wrangles, land grabbing, forced evictions and unfair compensation by Government and investors.

“Fifty percent of land holders are affected by some sort of land disputes,” the research, which was conducted in 12 districts drawn from Karamoja, northern, eastern and central regions, noted.

Speaking at the launch of the report, Med Kaggwa, the chairperson of Uganda Human Rights Commission, said the aim of the study was for the Government to gain a deeper understanding of the underlying issues behind land disputes and the related human rights implications.

“The research comes at a time when land disputes have become a common occurrence in Uganda, with implications on the enjoyment of fundamental human rights and freedoms. It is important to note that land is not only one of the most important resources, but also a means to the realisation of other human rights such as the right to food, right to life and the right to cultural identity,” he said.

However, Dr. Zahara Nampewo, a lecturer of human rights law at Makerere University, said urbanisation, politicisation and militarisation of land are the major drivers of land conflict in the country.