IN March 19, 2020 BY witnessradio.org 630 views Leave a comment
land, livelihood and investment Livelihood Natives and Businesses 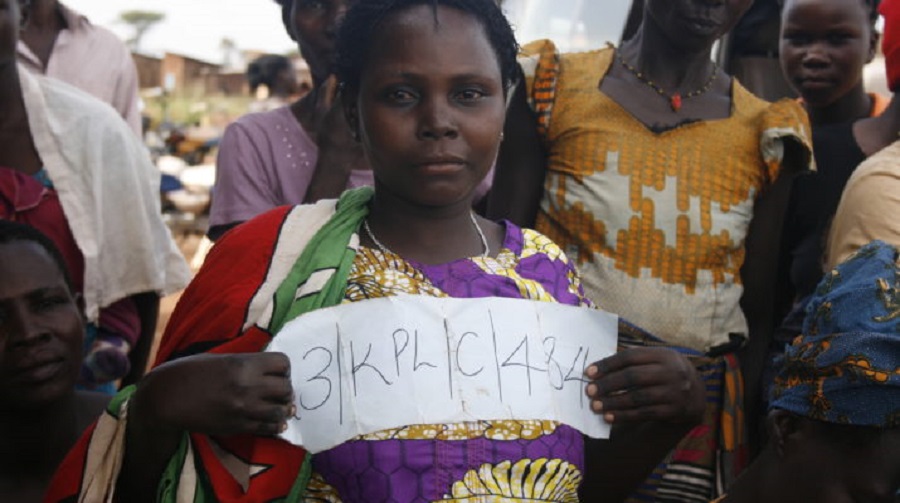 A look of anguish covers their faces, some break down in tears as they reminisce the events that led to their forceful eviction from a 13-square-mile chunk of land in Kiryandongo district.

The evictions that started on Christmas day in 2017 have left more than 30,000 families homeless after three plantation farmers – Kiryandongo Sugar Ltd, Agilis Partners, and Great Seasons Ltd took ownership of land that the government had originally allocated to Nyamalebe Farmers Association.

“We have petitioned several government ministries and departments including Parliament, we have been to courts and State House but no one seems to care about our plight,” John Isingoma, the chairman of Nyamutende village told a group of rights activists that visited the area on March 12.

The activists were drawn from Food Rights Alliance, International Accountability Project, GRAIN and Witness Radio which taking the lead in pursuing a litigation process against the government and the investors whom they accuse of rights violations.

The land in question is part of the 37.8 square miles of land, originally registered under the Bunyoro Ranching Scheme but allocated to landless people in 1997 under the ranches restructuring program that began in 1990.

It is part of what was formerly registered as Nyamakere and Kibeka Central Forest Reserves.

According to a June 16, 2014 letter by the then State Minister for Environment, Flavia Nabugere to the Prime Minister, the decision to allocate the forest reserves to the landless people was reached after an assessment that proved that human settlement was a better option than having ranches along the River Nile Basin.

This was the position of the relevant government Ministries, Kiryandongo district local government and backed by a cabinet and Parliamentary approval especially after the government found the same land suitable for the resettlement of the 2011 Bududa landslide victims.

Behind the scenes, the district leadership entered into a memorandum of understanding (MOU) with Kafu Sugar Ltd to take over the land for sugarcane growing.

The locals ran to the High Court in Masindi to the challenge the MOU and for an injunction to the activities of the sugarcane growers on the land.

The suit has remained in the court shelves while the Asian directors of Kafu Sugar Ltd incorporated another company in the names of Kiryandongo Sugar Ltd that went ahead with the sugarcane growing program.

Kiryandongo Sugar Ltd moved to take possession of the land after a November 16, 2017 letter by then Lands minister, Betty Amongi, addressed to the Kiryandongo district leadership, telling them that the Uganda Land Commission had allocated ranches numbers 23, 28, 29 and 30 to the sugarcane growers.

She reported that Museveni had approved the allocation while other private holders of the ranches had sold their stake to other investors.

Agilisi Partners from the Cayman Islands paid more than Shs 7.7 billion to take possession of 2600 hectares (four square miles) of land to cultivate simsim, soybean, and maize while another five square miles of land is held by a coffee-growing company, Great Seasons Ltd.

“In respect of the above, the resident district commissioner [RDC] and the district leadership are instructed to assist in all ways possible the owners of the specified ranches to amicably negotiate and settle any disputes with the legal tenants on the subject properties In accordance with the relevant land laws,” Amongi wrote.

Her letter was in protest of an earlier letter by the State Minister for Lands, Persis Namuganza that favoured the tenants against the interests of the investors.

“The issue of Kiryandongo ranches is before cabinet and His Excellency the President guided that a clear government program be drawn to come up with projects that will be established in these ranches, and also guided that all title [deeds] that were acquired on the same land be canceled, and those who purport to have bought [the land] be arrested because these are government ranches,” Namuganza’s November 7, 2017 letter to the Kiryandongo RDC partly reads.

Amongi told the Kiryandongo leaders to disregard Namuganza’s letter because it was “bound to cause legal suits” against the government.

While Namuganza relied on what transpired in the cabinet, Amongi acted upon Museveni’s July 17, 2017 letter in response to hers written on May 15, 2017, requesting for presidential approval to lease the Kiryandongo ranches to Kiryandongo Sugar Ltd.

What is so hurting for Joyce Bududu Tayebwa is that the evictions started a year after she had mobilized the locals to give Museveni a 100 percent score in the 2016 presidential elections.

“I feel ashamed that Museveni is doing this to us; it hurts me so much that for all this time, I have been working for NRM but Museveni found no difficulties in deploying his soldiers to inflict all sorts of atrocities on us,” a teary Badudu said.

Unlike others who were resettled on the land, Badudu was born here in 1975. Her mother, Stella Kamwoshe looked on as her daughter narrated their ordeal.

Kamwoshe now sleeps by the roadside under tarpaulin covers as she keeps watch over her herd of about 30 heads of cattle.

Attempts by the Kiryandongo district leaders to get her back on her land, and for her cattle to access her valley dam have not yielded any fruit.

“I blame Museveni for the scars on my body because it is him who sent the army to shoot at us, beat us, raze our homes and kill our animals,” Badudu said.

The CSOs led by Witness radio have in the meantime launched an online campaign urging the governments of the UK, Netherlands and the United States to freeze their support to the companies involved in the evictions over human rights violations.

The CSOs put the number of victims at more than 30,000 families that have suffered violations such as the use of excessive force, illegal arrest, and detention, harassment, intimidation, demolition of schools, worship centers and homes.