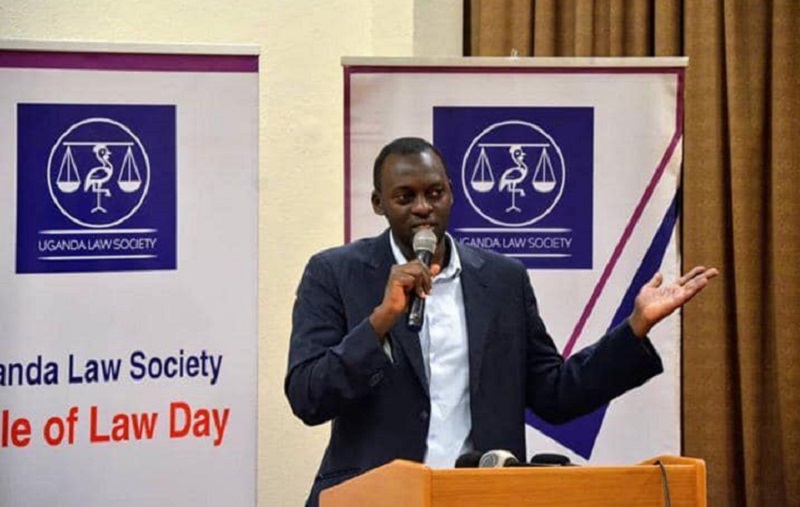 Mubende – Uganda: Eron Kiiza, the lead counsel, for the 28 jailed land rights defenders was on Thursday briefly detained at Kaweeri government Prison. The arrest stemmed from his lawful demand to have access to his imprisoned clients. The prisoners had been transferred from different prisons including Muyinayina and Katojo government prisons to Kaweeri Prison ahead of the criminal trial.

Before Kiiza’s detention, the accused’s’  battery of lawyers had beseeched Deborah Wanume, the deputy registrar of Mubende High Court to permit them to have access to their clients which was granted.  However, issues turned ugly when the lawyers later on the afternoon visited the prison.  They were turned away by prisons authorities and consequently advised to return another day.  The lawyers who were taken aback by the by this stance which was in clear violation of a court order weren’t cowed.  They made a second attempt to meet their clients and this time the prison officers came up with a different explanation; they claimed there is no fixed time for lawyers to see their clients and this did not go down well with Kiiza who was immediately arrested. Minutes later following protests from Kiiza’s fellow lawyers and other land rights defenders; the lawyer was not only released but also allowed to have an interface with the incarcerated land rights defenders.

Ever since Kiiza and his legal team got instructions to represent vulnerable communities he has received numerous threats. From within and without.   He recently appeared before Police’s Criminal Investigations Department (CID) for questioning following a complaint by Mubende High court Judge his Lordship Justice Joseph Murangira.  The judge was not pleased with Kiiza’s online campaign. Through various Facebook posts, Kizza asked Murangira to recuse himself from the case citing apparent bias and other ethical issues.  The first threat, paradoxically, came from the president of Uganda Law Society, Simon Peter Kinobe, a person who was expected to defend him. Mr. Kinobe ordered the indefatigable Kiiza to pull down his contentious Facebook posts but Kiiza responded with a big no.

The 28 whose case has been cause listed for the criminal session have been on remand since the fall of 2018. This year’s criminal session at the High Court of Uganda at Mubende shall be presided by his Lordship Justice Anthony Oyuku Ojok, the Resident Judge of High Court of Uganda at Arua. The 28 land rights defenders were framed, arrested and charged with nine (9) counts including murder and aggravated robbery after they defied an illegal and forceful eviction of over 3000 inhabitants off their ancestral land measuring 322.5 hectares. The eviction masterminded by one Kaweesi George and his agents who among others some police officers and casual labourers.

Like in many cases across the country including that of seven community land rights defenders that were sentenced to 34 years in prison in Mubende district, the use of the Penal Code Act in land-related matters is on the increase.  The land-grabbing elements have resorted to the use of the Penal Code to charge land defenders because the law is lethal.  It unleashes harsher prison sentences than any other

and also obtaining bail once charged under it is either legally hard or too expensive for the rural communities in Uganda   These persecutions are manifesting majorly in districts that host minerals including sub-regions of Karamoja, Bunyoro and Buganda.