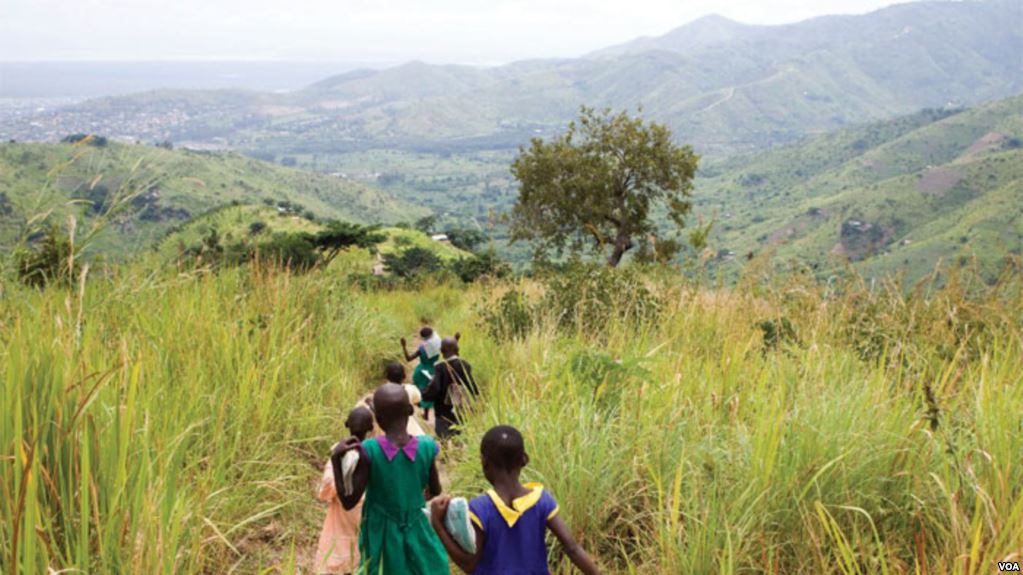 The step foothill inclines rise high above the clouds, lush with fertile soils and rich vegetation. The air is clean and crisp, and the cold rivers are clear and bursting with life.

As you descend the mountains, however, there is another story to be told. The poverty in Mahango is evident. People live from hand to mouth, relying on small subsistence farms to eke out a living. Those who are able to sell their produce barely make enough to save for the future.

In the small trading center of Kabwarara, it appears like business is booming. However on a closer look, only one trade is minting money. Cheap potent alcohol is on sale all over the trading center. The sachets, some which are sold for little as 200 Ugandan shillings, are a low-cost lure for many. Those hooked on the drink start to consume it as early as 8 o’clock in the morning, and often don’t stop long after the sun goes down.

The rising sale of cheap alcohol appears to have increased alcoholism in this small mountainous area. This has had a knock-on effect on almost all activity in Kabwarara. Parents have abandoned their family duties to their children. Teachers are missing classes. Several small subsistence farms have gone unattended for many months.

17-year-old Grace Biira is one of the victims of the cheap alcohol trade. She dropped out of school in senior two, lured into a job of selling alcohol at a bar in Kabwarara.

Now, Grace has three children, and is entirely dependent on her poorly paying job to care for her growing family.

Grace is one of the thousands of girls in Uganda who drop out of school every year. Like many of her peers she was forced out of home by abusive parents, and into an early marriage.

Although her current situation is dire, Grace says she is better off now than when she was home.

Although there are several employment opportunities for Grace in her home town, the scope is limited, and the chances that she will advance economically are minimal.

A 2014 report by UNICEF on the impact of child marriages found that low school progression rates in Uganda lead to a large number of girls leaving school early. This in turn has an impact on their ability to be productive in the labor market, and limits their economic capabilities and employment options.

The 2014 Housing and Population Census of Uganda found that in the past decade, the number of child marriages and school dropouts declined significantly.

However Sam Bwambale, chairperson of Kabwarara trading centre, says more needs to be done to educate people about the causes of teenage pregnancies and school dropouts. He says more parents should be educated on their responsibility in order to protect their girls. 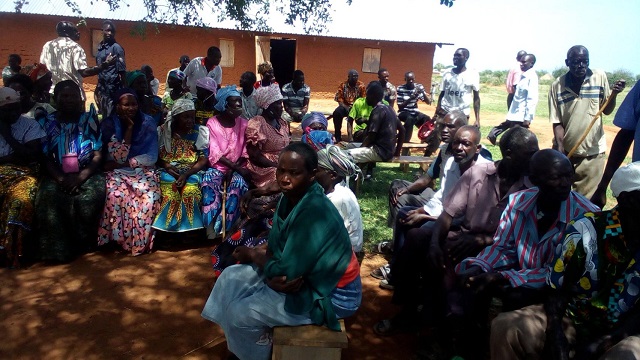 Buliisa, Uganda | THE INDEPENDENT | Several people facing forceful eviction from their ancestral land in Buliisa are accusing their tormentors of branding them as Congolese nationals. The affected people say that the majority of the land grabbers refer to them as Congolese despite the fact that they have occupied the contested land since their birth.

A case in point is the more than 1,000 people who are being threatened with forceful eviction from their ancestral land in Watembo and Booma villages in Butiaba town council. The affected residents are feuding with Francis Kaahwa, a prominent businessman in Buliisa and Kampala over approximately 1,800 acres of land.

Deo Ntakimanyi 60, the Boma village LC I Chairperson says that his late grandfather was born on the contested piece of land but he is shocked to hear that he is a Congolese.

Gilbert Okumu 70, a resident of Watembo village also says that he was born and raised in the area but was shocked when Kaahwa started referring to him as a refugee with the intention of grabbing his ancestral land.

Pascal Kyalisiima, another affected resident says it is unfair on the part of the land grabbers to label them as Congolese to dupe security and grab their land. He says they have genuine National identification cards and Graduated tax tickets they paid in the 1950s while settling on the contested piece of land.

Jane Kusemererwa 80, says she lost both parents who were equally born and buried on the same piece of land and wonders she is now being referred to as a Congolese. Bernard Asiimwe, another resident wants the authorities to take action against Kaahwa for referring to them as Congolese well knowing that they are Ugandans.

Kaahwa has denied the accusations leveled against him by the residents. He however maintains that he is the rightful owner of the contested land, adding that he genuinely acquired the title.

Allan Atugonza, the Bullisa County member of parliament says many people who have in the past grabbed land in Buliisa have always referred to the indigenous people as Congolese nationals, which is false.

Stephen Mfashingabo, the Buliisa Resident District Commissioner-RDC says they are verifying the allegations despite the fact that nobody has formally brought the matter to the attention of his office. 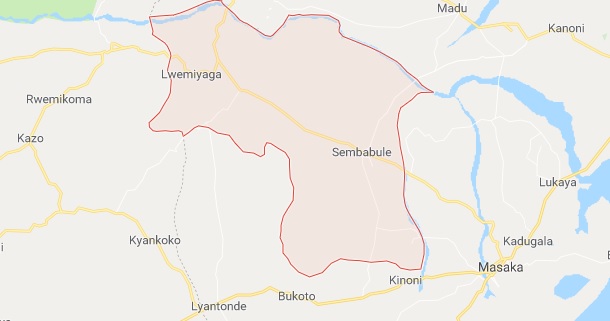 Sembabule, Uganda. Sembabule district local government has halted the issuance of land titles in a move to address the widespread land disputes in the area.

The decision was based on the district production sectoral committee report, which highlighted the widespread land disputes as one of the factors affecting agricultural production in the area. Records indicate the district is currently stressed with land wrangles that are largely arising from irregular allocations facilitated by unscrupulous area land committees at sub-county levels.

Julius Ssebugwawo, the Secretary of the District Production Committee says that hundreds of residents in the area are living in fear of eviction by people who irregularly acquired land titles over big chunks of land and that as a result, the disputes are frustrating agriculture.

According to him, they established that notable wealthy persons in and outside Sembabule are using manipulative tactics to connive with area land committees to facilitate irregular allocations of public land, at the expense of hundreds of residents who also depend on the same land for survival.

Ssebugwawo explains that the tenure of the majority of the area land committees expired but they have continued to transact business, messing up processes of land allocations in the district. The report also indicates that the local committees have facilitated the issuance of free-hold and overlapping titles over community social amenities such as valley dams and gazetted forest reserves, wetlands and in the precious Bigobyamugenyi Archeological site in Ntuusi sub-county.

Nahaabwe adds that on top of threatening the settlements and economic agricultural activities, the wrangles are also casting the district in bad light which calls for serious intervention by the current district administration. Accordingly, the councillors unanimously resolved to suspend operations of all sub-county area land committees and recommended halting further issuance of land titles in the area until an audit is done on the operations of the District Land Board.

Olivia Nakayiwa the Sembabule district Deputy Speaker who presides over the council session accordingly asked Malik Mahabba; the Chief Administrative Officer to write to all sub-county chiefs and Chairpersons instructing them to implement the resolution. Mahabba said n his response that he had also noted the concern on land disputes in the area, saying this could be one of the approaches towards fixing the challenge.

Nayebare Kyamuzigita, the outgoing Sembabule Resident District Commissioner also confirms that her office has been overwhelmed by cases of land disputes, many of them threatening hundreds of people with eviction. 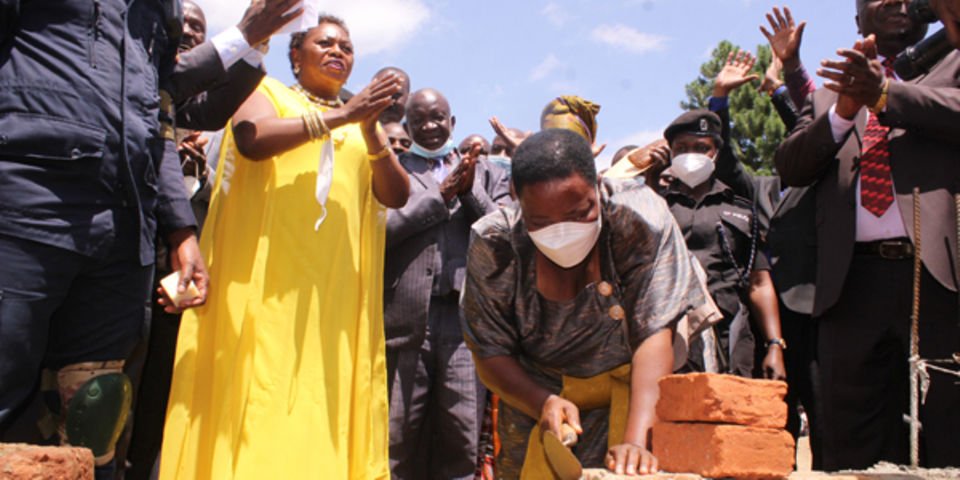 Prime Minister Robinah Nabbanja commissions the construction of a community social centre in Bundibugyo District at the weekend. Locals tasked the President to fulfill pledges to the district

President Museveni has promised to compensate residents who were evicted from the land housing  Kiryandongo sugar factory in Kimogora Village.

The President made the pledge while commissioning the $60 million (Shs216b) factory at the weekend.

The factory was constructed by Sarrai group on government ranch land, with works commencing in 2018.

Mr Museveni said the government allowed Sarrai group to establish the factory although some people had encroached on the land.

“These squatters had encroached on government ranch land and were not bonafide occupants but are our people. Bonafide occupants are those who had stayed on the land before 1983, but these came much later. The NRM government, however, we will compensate them,” he said.

In 2017, President Museveni donated the land to three companies, including Kiryandongo Sugar Factory, Ajilis Partners, a US company, and Great Season to pave way for large-scale farming.

“Stop living reckless lives by spending your money on alcohol,” the President said.

Mr Museveni advised locals to engage in agriculture so as to supply produce to investors undertaking projects in the area.

He also promised farmers that Cabinet will soon debate initiatives of extending irrigation schemes to them since the weather patterns are not dependable.

“Even this season, the rain has delayed. The maize is still young. I don’t know if we shall have better yields, that is why I will have to take the issue to the Cabinet and we will talk about it,” he said.

Mr Sarbjit Singh Rai, the chairperson of Sarrai group, said they have so far planted 13,000 acres of sugarcane, adding that the factory has a production capacity of 4,000 tonnes per day.

“The factory has registered a total of 150 sugarcane out growers and we are now employing 5,000 people but we hope to increase the number to 8,000 in the coming years,” he said.

Mr Rai said the factory will also help farmers get better yields by supplying them with pesticides.

Meanwhile, leaders in Bundibugyo have reminded the President to consider fulfilling pledges he made to the district. The Bughendera County MP, Mr Moses Acrobat Kiiza, told Prime Minister Robinah Nabbanja during her visit to the district at the weekend that in 2015, Mr Museveni pledged to create Bughendera district and establish a cocoa factory.

“Prime Minister, we kindly ask you to remind the President about the creation of Bughendera, a cocoa factory and also compensate the flood victims in the district,” Mr Acrobat said.

He said the district has already secured land where they propose to construct the factory.

In her response, Ms Nabbanja said: “The  NRM government does not forget its people, so be patient, we are coming to fulfil everything.” She was in the district for the fundraising of the construction of a community service centre.

The farmers also complained of poor market prices due to lack of a factory to process it.

According to the district production officer, Mr Light Kisembo, they produces 24 metric tonnes of cocoa annually.

In 2016, Mr Museveni directed then the Minister for Trade to work with the ministry of Finance to budget for the construction of the factory.

Gov’t body evicts hundreds, orders the remaining families on the land to de-molish their houses…