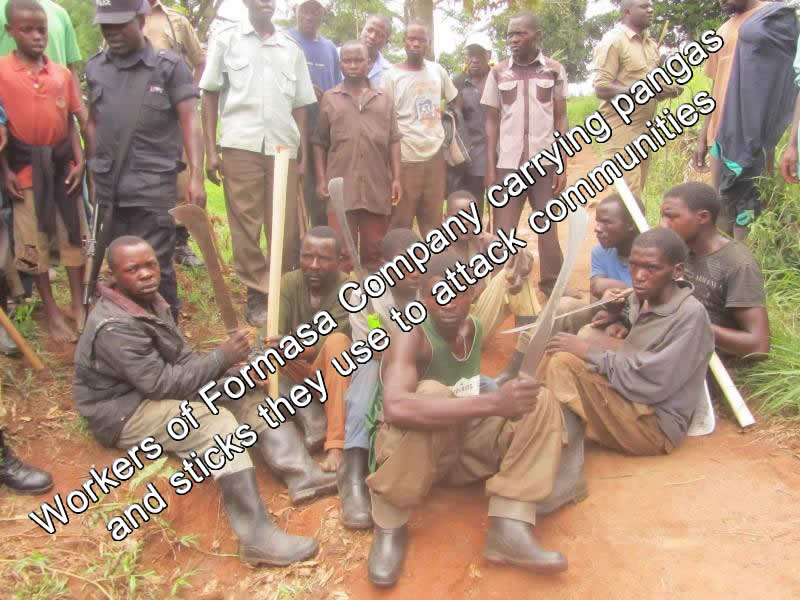 Close to a decade now, thousands of families that have been facing gross human rights abuses to surrender their land to an investor without compensation are currently being targeted. Mubende police is randomly arresting their leaders who have been at the forefront opposing the grabbing.

Since Formasa picked interest in this land, dozens and dozens of families were stopped by Mubende police and office of the Resident District Commissioner from cultivating their land causing food insecurity, famine, unbearable suffering, poverty and families breaking down.

The unsystematic arrests and incarcerating of community leaders intensified shortly after a Formasa company manager Steven Tumwine was hacked to death.  Late Tumwine was killed on July 18th 2017 by unknown people while in a garden of one of the residents cutting down plantations to plant trees without owner’s consent.

The Witnessradio.org has been raising warning bells about the possible conflicts as a result of failing to protect natives’ land rights. https://witnessradio.org/lawlessness-angry-natives-kill-a-farm-manager-to-protect-land/

Some of the leaders in prison include; Sinamenye Paul, 54, Kaberuka Finolo, 60, Ssalongo Ssemboobwe, 57, Butoro local council one chairperson and Hategeka Esau, a LC III male youth councillor of Maddudu sub county among others. The trio was arrested on 19th/ 07/17 while Hategeka was arrested on 25th/07/2017 detained for several days at Mubende police station before being transferred to Chief magistrate court and charged with murder. They were remanded at Kaweeri Prison. All prisoners are residents of Butoro village, Naluwondwa Parish – Maddudu Sub County in Mubende district.

Others that have been released on police bond include; Kibenja Dan, Seggujja Jimmy, Ssekabira Homisdasi, Ssebunya Yonah, and Sserugo Sam among others claiming that they experienced police’s extortion before being granted a police bond.

Witnessradio.org has also recorded testimonies of residents accusing workers of Formasa Tree Planting Company for being part of police to cause mayhem to communities.