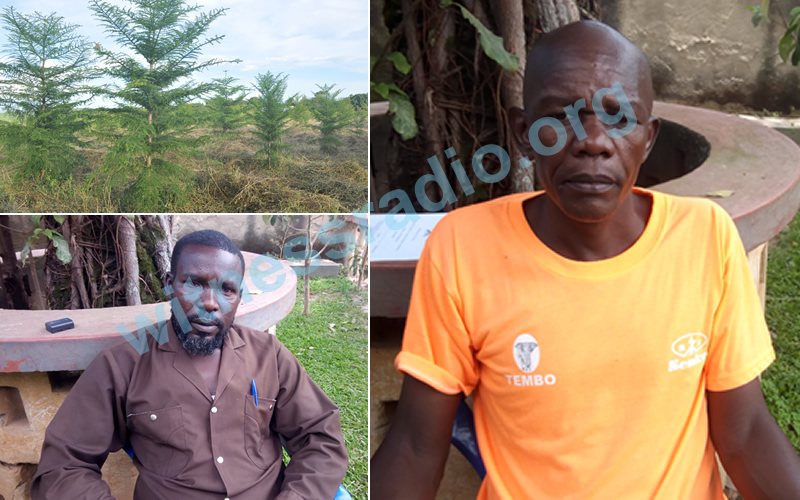 Formasa limited, a Chinese owned Company dealing in tree planting business was in 2010 introduced to 1000 native families from over twelve (12) villages in both Maddudu and Butoloogo sub counties by Mubende District Deputy Resident District Commissioner (RDC) Evelyn Tinkamarirwa Akiiki. RDC is a president’s representative at a district whose position is established by the 1995 Constitution of Republic of Uganda.

No sooner had the company been introduced than hundreds of casual laborers were brought and established a camp under Mubende police protection. Family gardens and plantations started getting destroyed to plant both eucalyptus and thorny pine trees, burning down people’s houses, allegedly gang raping women, attacking community members with pangs and machetes, harassment of community members, arresting and detaining community leaders opposing illegal land evictions.

Lubuuka Harunah, 35, is a resident of Kisiigwa LC1, Maddudu Sub County.  He claims that on 02/7/2014 he was attacked at his home by a group of company workers. He said his body parts were cut with machete and got admitted at Mubende Referral Hospital. “I was being accused of refusing to vacate my land for the company to plant trees”. Said Lubuuka.

He said upon being discharged from hospital, he filed an assault case against company workers at Mubende police station on 04/07/2014 but instead; Mubende police arrested him few days later and got produced before court. He was charged with assault CR. CASE NO.514/2014 for assaulting FORMASA company workers.

Court remanded him to Kaweeri prison for one year after which, he secured cash bail and got released from prison.

Lubuuka said that by the time he returned home, he found his entire land covered by trees belonging to Formasa Company on top of demolishing his house that he had built there!

I tried to seek justice, but any government office like Police, RDC, among others, that I have been to, they just send me away only threatening to arrest and get me back to prison again. In fact, I am now timid to the extent that I no longer want to talk about these things anymore”. Said Lubuuka. He added that the case was later dismissed due to lack of evidence after losing his entire land to the company.

Paul Sinamenye, 54 a resident of Nakasozi village, Naluwondwa Parish – Maddudu Sub-County, claims he was falsely charged with assaulting Stephen Tumwine, the Manager at Formasa Company under Criminal case No 0608/2016. He said, when he was taken to court, he wasn’t allowed to say anything and Grade One Magistrate Wandera Wilson remanded him to Kaweeri prison. “What hurts me is that Formasa Company used the period I spent in prison to grab my land through planting their trees and as I speak now, I don’t have any farmland to grow food to feed my family” said Sinamenye.

Sinamenye added that his case was later dismissed after the complainant (Tumwine) made a U-turn and denied having been beaten.

He said they later filed a civil suit against Asiimwe for malicious case civil suit No. MBD CS 16/2107 Hategyeka Esau & Sinamenye Paul Vs Tumwine Stephen. “Upon receiving court papers requiring him to put in his defence within 15 days, he came with police to arrest me and Hategyeka. We were arrested and charged with a new assault case No. 0608/16 accusing us of beating up workers of Formasa Company” said Sinamenye.

Jimmy Ssegujja, 45, is a resident of Kyedikyo village, Maddudu Sub County. He said during the forceful evictions by Formasa Company, he refused to leave his land and resisted the company’s plan to plant trees in his land. As a punishment he was arrested by police and charged with a case relating to removing of boundary marks contrary to CS 338 Penal Code Act on file CRB 518/12/case No. 192/2012. The magistrate jailed him at Kaweeri prison, before being transferred to Kijumba prison.

After spending three months on remand, I was taken back to court, but I was never allowed to bring my witnesses only to be convicted and sentenced to six months. On completion of my sentence, I returned to my home, but I couldn’t find my wife at home-she had left, and part of my land had been grabbed. But my efforts to reclaim the ownership of my land was in futility, because Formasa Company seem to have bribed all officials in the various government offices I ran to, because everybody gave my issues deaf ears.