LivelihoodLand Bill: From Being a Custodian To an Owner? 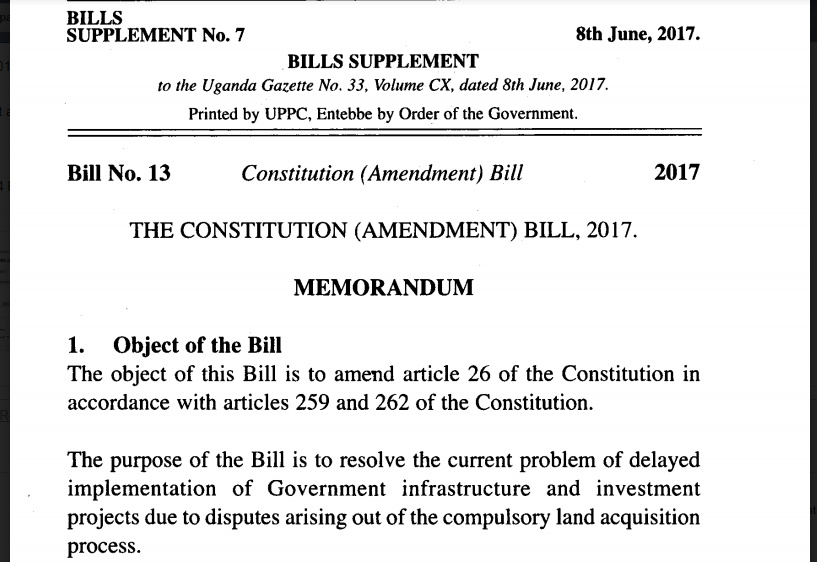 On 13 July, 2017, Government of Uganda through Mwesigwa Rukutana, the deputy attorney general, tabled a Constitutional (Amendment) Bill 2017 in parliament which intends to amend article 26 of the Constitution to allow State compulsorily acquire land for infrastructural development.

According to the United Nations Food and Agriculture Organisation (FAO), compulsory land acquisition is referred to as the power of government to acquire private rights in land for a public purpose, without the willing consent of its owner or occupant.

The 1995 Constitution of the Republic of Uganda under article 26 (1) states, “Every person has a right to own property either individually or in association with others,”

While 26 (2) (b) introduces the compulsory acquisition set standards namely; (i) “prompt payment of fair and adequate compensation, prior to the taking of possession or acquisition of the property.”

Article 237 of the Constitution goes ahead to say, “land in Uganda belongs to the citizens of Uganda and shall be vested in them in accordance with the land tenure systems provided for in the same Constitution.”

However, the new Constitution (amendment) bill, 2017 obtained by witnessradio.org seeks to “resolve the current problem of delayed implementation of Government infrastructure and investment projects due to disputes arising out of the compulsory land acquisition process.”

The bill currently being scrutinized by Parliament’s committee on Legal and Parliamentary Affairs seek among others to;

And 26 (4) shall provide that “the owner of property or a person having any interest in or right over the property shall have a right to access the compensation deposited with the court referred to in clause (3) at any time during the determination of the dispute.”