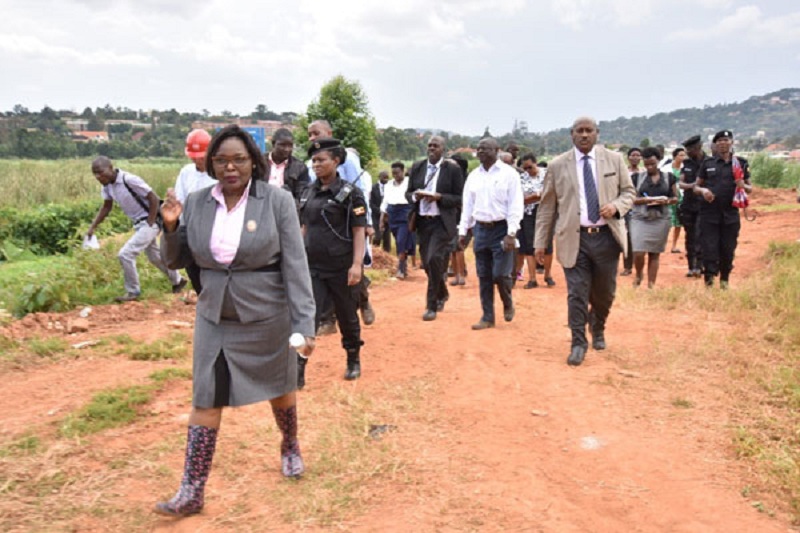 On duty. Justice Catherine Bamugemereire and other members of the land probe commission inspect a wetland in Luzira, Kampala, on June 13. PHOTO BY EPHRAIM KASOZI

Authorities at the ongoing Commission of Inquiry into Land Matters have arrested a man attached to the probe on suspicion that he leaked vital information to private individuals and government officials under investigation.
This newspaper understands that one of the Information Technology (IT) experts attached to the commission, was arrested this week on the orders of Justice Catherine Bamugemereire.
The man (named withheld) was arrested following a spate of complaints, linking him to leakages.
Sources told Sunday Monitor that the man was picked from his office by police detectives attached to the Justice Bamugemereire-led commission.
The suspect was designated to the commission as a document specialist attached to the IT section.
It is alleged that sensitive information about the ongoing investigations in cases involving high profile officials of government and private individuals involved in land disputes have on several occasions leaked before they are even summoned to appear.
Dr Douglas Singiza, the commission secretary, on Thursday confirmed the man’s arrest. He, however, declined to divulge the details of the leaked information for fear of jeopardising investigations.
“We are still investigating and we shall furnish you with the information once it is ready for the public,” Dr Singiza said.

Kasangati DPC quizzed
Meanwhile the commission on Thursday questioned the District Police Commander (DPC) in charge of Kasangati, Mr Robert Kachumu in connection with the violent eviction of 5,000 rice farmers from a 1,500-acre wetland in three sub-counties of Butaleja District.
It is alleged that during his tenure as DPC of Butaleja District, Mr Kachumu commanded the forceful eviction of the farmers from the land they occupied and cultivated for decades.
Evidence presented before the land probe shows that in April 2015, two business people: Mr Malik Koire and Mr Kadri Hifude (now deceased), with the help of armed policemen and stick-wielding men and without court order invaded the disputed land and evicted the farmers.
The land in dispute is located in Butaleja Town Council, Kakyonga and Mazimasa sub counties.
It is a swamp adjacent to Doho government rice scheme. The complainants used it for cultivation of rice and other crops. The farmers under their Doho-Muhula Out growers Association petitioned the probe seeking for justice. They accused Mr Koire of colluding with the police and the office of the Resident District Commissioner (RDC) to evict them from the farm land they occupied and cultivated over decades.

Accused
Other senior police officers named for allegedly facilitating the violent evictions are Superintendent of Police (SP) Alex Wabwire, Senior Superintendent of Police (SSP) Patrick Odonkonyero and SSP Peter Kakonge who are also jointly accused with the office of the RDC in Butaleja District.
Mr Kachumu, however, denied any wrongdoing saying that during his tenure in Butaleja he concentrated more on peaceful resolution of the dispute.
Mr Kachumu testified that he registered cases of malicious damage to property, assault and theft which cases he referred to the regional office in Tororo for handling but no arrest was made.