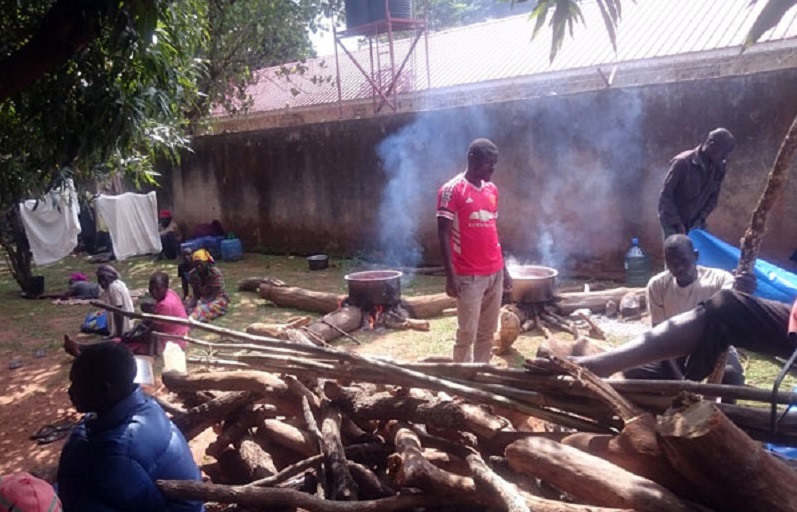 Protest. Some of the residents of Apaa Village in Mungula Parish, Itirikwa Sub-county, Adjumani District pitch camp at the Office of the High Commissioner for Human Rights in Gulu Municipality on Monday. ACTIONAID PHOTO

GULU. An alliance of civil society organisations have piled pressure on the United Nations (UN) officials and the government to respond to the plight of the Apaa land evictees, who have camped at the Office of the High Commissioner for Human Rights in Gulu Municipality.
More than 200 residents of Apaa village in Mungula Parish, Itirikwa Sub-county, Adjumani District, have pitched camp at the UN compound since July 11, protesting ongoing evictions by government security forces.
The residents demand that the UN human rights body intervenes and stop government security agencies from forcefully evicting them from the contentious land.

But for more than two weeks since they camped at the UN compounds, the residents have not got any feedback from the UN officials on their demand.
Mr Francis Odongyoo, the executive director of Human Rights Focus, while addressing journalists in Gulu Town on Tuesday, said the residents had failed to get justice from government and their camping at the UN offices should have been responded to.
“It is now 13 days since the residents of Apaa have been seeking an answer from the UN on their plight but no response has been made. As CSOs, we feel the displaced locals should get fair justice from the UN on the matters they presented,” Mr Odongyoo said.

He noted that despite the residents calling for a halt in the evictions, the government forces comprising of the UPDF and Uganda Wildlife Authority rangers are continuing to torch huts and displace those settled on the disputed land.
According to Mr Odongyoo, investigations carried by CSOs indicate a total of 844 huts were destroyed and more than 2,700 people have since been displaced in the forceful evictions that began early this year.
Mr David Moses Okello, the local rights programme cluster coordinator at Action Aid, noted that government should address the plight of the locals whose lives are being torn apart by the forceful evictions.

According to Mr Okello, CSOs are firmly behind the locals’ occupation of the UN offices until they get justice.
In a joint communiqué read by Mr Geoffrey Okello, the coordinator NGO Forum, the CSOs condemned the abuses being committed in Apaa since 2011, including “mass destruction of property, torture, extrajudicial arrests, murders and attempts to seize land”.
They also called on government to publicly guarantee the security of the Apaa community from further attacks, ensure removal of road blocks and intimidating security forces and invest in durable solutions, including degazetting the Apaa land.

When contacted on the issue yesterday, Gulu Resident District Commissioner, Maj Santos Okot Lapolo, said the locals had chosen to “embarrass” the government by camping at the UN offices even when President Museveni promised to visit them.
“As government, we cannot issue any statement concerning the plight of people who came without our notice and camped at the UN offices. Let them get the help they want from there, President Museveni has promised to meet them from Apaa, not the UN offices,” he said.
When this reporter tried to access the UN offices to get a comment from the officials, he was denied access by the police at the gate, claiming journalists are not allowed in the premises.