IN October 21, 2019 BY witnessradio.org 634 views Leave a comment
land, livelihood and investment Livelihood 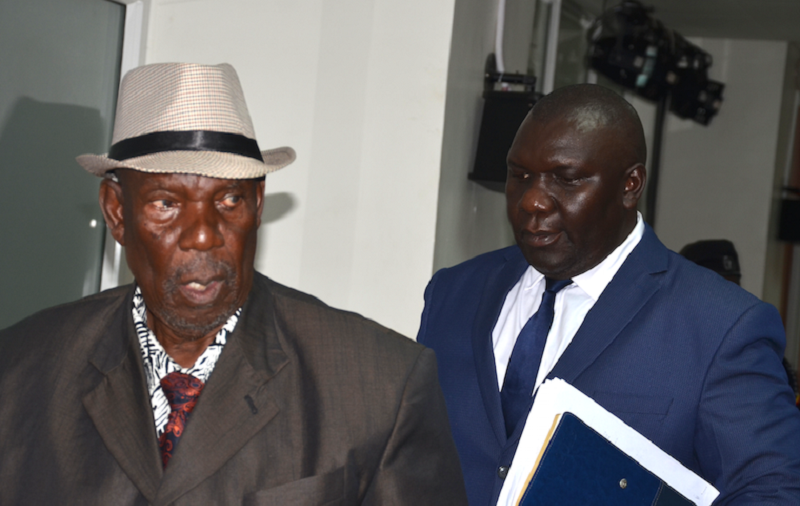 The Commission of Inquiry into land matters has canceled the land title belonging to police spokesperson Fred Enanga and his father George Econga Okabo, a retired superintendent of police because it is shrouded in irregularities.

The disputed four square miles of land covers four parishes of Amun, Ayago, Apoi, and Alaru with over 1,740 households and is located in Maruzi Block 2, plot 66 at Oreta village, Akokoro sub county in Apac district.

Enanga and Econga were summoned after clan members including Enanga’s 96-year-old grandfather, Naphtali Enanga and his aunt Lilly Alwedo petitioned the Commission, accusing father and son of attempting to grab the customary land that belongs to the Okabo clan.

On Wednesday Enanga and Econga appeared before the Commission chaired by Lady Justice Catherine Bamugemereire and asked the Commission to facilitate mediation with the clan and other residents, saying they never had the opportunity to negotiate over the dispute.

Econga accused the residents of encroaching on land that belonged to his late father Enoci Okabo. He told the Commission that the occupants have no rights over the land and must vacate for his family to set up a privately owned mixed farm and mechanized agriculture project.

Enanga said their family has been a victim of unclear intrigues, propaganda and fabrications. Enanga and his father face accusations of illegally registering the customary land as freehold in the names of Awilodyang Mixed Farm, a company they jointly own in total disregard of the interests of the occupants. Awilodyang is a Langi word for ‘I bought a cow’.

The witnesses; Naphtali and Lilly Alwedo, Econga’s brother and sister respectively accused Enanga of perpetrating the dispute from the background using police officers that he occasionally draws from Apac central police station.

Enanga denied the accusations saying his parents only reported criminal activities targeted at their family and property to local leaders which led to some occasional arrests and detention of those behind those criminal activities.

He also refuted allegations that they are claiming the entire 10 square miles of the land, a complete departure from his father’s position that he owns the entire land.

The duo claims they inherited the land from Enoci Okabo, Econga’s dad after he migrated and settled in the area in 1949 after suffering the misfortune of losing three children from Okabo clan land located in Alia village in Akokoro sub-county, some eight miles from the disputed piece of land.

Enanga explained that his grandfather migrated to the area from Alia village citing witchcraft in the death of his three children. Commissioner Robert Ssebunya implored Enanga and father to negotiate with the clan members claiming the land to protect their family legacy.

The Commission told Enanga and father that the land was illegally registered in the names of Awilodyang Mixed Farm because the company is separate from George Econga Okabo who had asked for it in 1978.

Herbert Byenkya, the Commission lead counsel said the company does not qualify to secure the customary land as freehold because it was registered as a non-citizen company. In response, Enanga said their lawyer Oper and Company Advocates could have made mistakes in registering the company.

Bamugemereire indicated that the title will be canceled because it is shrouded in illegalities. Enanga’s testimony was interrupted by a repeated power outage which forced the Commission to prematurely adjourn the matter.

Clan members accused Enanga and Econga of using police to forcefully evict them or block them from accessing water from a community borehole sunk by the government in the area.

The Commission later established that the land measuring 824.28 hectares located in Oreta village in Akokoro sub county in Apac district, has been registered as freehold in the names of Awilodyang Mixed Farm, owned by Econga and his son Enanga. They registered the Company in 2018.

Appearing before the Commission earlier, Naphtali and Alwedo said they were shocked at how Enanga, who according to them rarely went to the village and was only given a small portion of land to erect a house and also do some farming in line with the clan’s objectives has now turned into a land grabber. Alwedo, told the Commission on October 7, that Enanga turned against them and began forcefully evicting them.

“Enanga and his father Econga, rarely came home. Enanga grew up in Kampala with his father and they didn’t even have any single hut in Oreta village” Alwedo narrated.

“Now, one time, his daughter died and he brought the body home for burial. Since he had no home to bury his daughter, his uncle Benjamin Enanga, offered to bury the daughter in him home. All seemed well. As a clan, they decided during the meeting after the burial that Enanga also be given some land to build a home”

Alwedo further narrated that “Enanga was given about six acres of land. He started building a house and I was even the one preparing food for the workers at the site. But to my surprise, Enanga chased me from the area and went on to chase all the clan people including his grandfather and uncles.”

The Okabo clan members are very bitter with Enanga’s actions saying he has brought blasphemy to Okabo.