Bunyoro’s displaced in throes of despair

IN October 21, 2019 BY witnessradio.org 340 views Leave a comment
land, livelihood and investment Livelihood 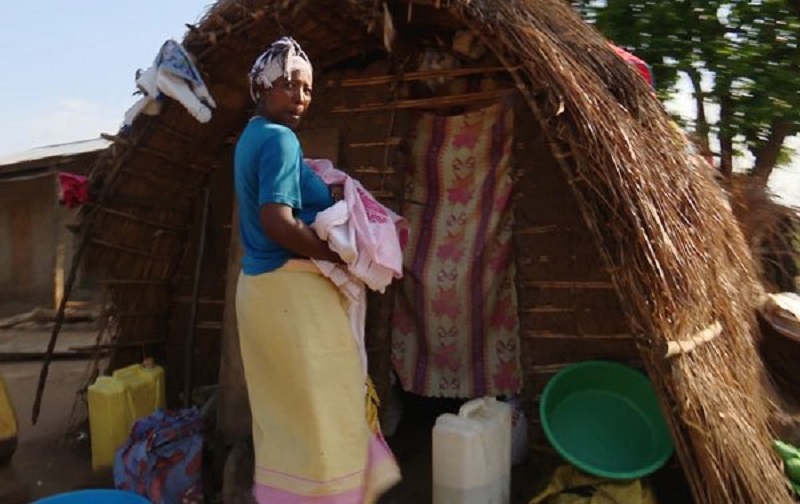 It is around 4pm when my cameraman and I arrive at Kijayo internally displaced peoples’ camp in Kikuube District, Bunyoro sub-region.
The children in the camp appear haggard and emaciated. They have not had a meal since morning and many are lying on empty and rumbling stomachs as they attempt to suppress the hunger pangs. Their families no longer have land to grow food after evictions started in 2012.
This is after Hoima Sugar Ltd, owned by Kenyan investors, purchased the contested nine square miles of land from Bunyoro Prince Herbert Kimera Rwakiswaza in 2011 to plant sugarcane in the new district of Kikuube, recently carved out of Hoima District.
The project has since left thousands of residents in the villages of Kijayo, Ikoba, Muziranduuru, Kyabataka, Kadiki, Kyakasoro and Kabango displaced and scores dead after the violent eviction on February 20, 2015.
Among those who died from their injuries were Augustine Karamira, Evylene Turyagumanawe, George Bangirana, and Francis Matovu. Matovu’s wife and three children were hacked to death using machetes. Others are Matia Mulumba, Aidah Kyarukunda, Wilson Singwire, Nakyanzi Akankunda wife to Erias Muganyizi, Hakim Sudayisi, Kiggundhu Adibayo son to Hamad Mwongerwa and Powerson Mugarura.

Deaths
The chairperson of the project-affected persons, Mr Asaba Muhereza, says in total, 26 people died, largely as a result of wounds they suffered after the attack.
The affected families now live in squalor in mud and wattle structures and others have constructed shacks adjacent to the area where they evicted. The piece of land was offered by the Local Council chairperson, Mr Edward Kasigwa, for free.
“I do not understand the way this government works; they provide all the necessary social services to refugees but we Ugandans are not catered for yet we vote them. They cannot even provide burial grounds for them that I have to bury them on my land,” reveals Mr Kasigwa.
Ms Joy Nerimasi is at pains to reveal that the graves of her husband and children were destroyed by the sugar company.
“My husband, including seven children, died but now all their graves cannot be traced; the company has planted sugarcane on them,” says Ms Nerimasi.
She lives here with her granddaughter and cannot afford to feed, clothe and take her to school. They lack adequate shelter when torrential rains pound.
Ms Nerimasi and others were forcibly evicted as police, using teargas and batons, set their homes ablaze.
She wants to return to Kijayo where she was born.

Living in shacks
Ms Gorret Kushemereire is another victim who reveals that her husband and children were killed during the eviction.
“I came from Fort Portal many years ago and we bought land here. During the forceful eviction, my husband and some of my children died while others disappeared. I cannot trace them now,” says Ms Kushemereire.
“We now sleep in shacks and my only son who would be helping me out cannot be traced,” she adds.
Ms Kushemereire says government has not been of help. “Our children cannot go to school and pregnant mothers have challenges of accessing health facilities. I continue to wonder whether I am a Ugandan or a foreigner. Why would government care about refugees and give them land instead of us nationals?”
There is barely any government presence here. Authorities from the Ministry of Disaster Preparedness in the Office of the Prime Minister or Hoima District have not come to the people’s aid to provide them with clean water, food and tarpaulin. Ms Esther Turyahebwa also sleeps in a shack with her husband and seven children. “As a woman, I need privacy with my husband but this is impossible and as we talk now, my neighbours who went to dig to get food have not returned and all the children are very hungry, they have not had anything to eat,” says Ms Turyahebwa.
Many children have dropped out of school because they have to trek long distances to study. Hoima District Chief Administrative Officer (CAO) Nathan Lujumwa told Daily Monitor that they have not acted because the matter is in court.
“Our hands are tied,” he said.
Mr Lujumwa, however, said the investor has compensated some of the claimants.
“We shall continue to push the investor to ensure that they compensate these people,” he added.
It is not yet clear why the district could not provide humanitarian aid to end the plight of the displaced as they await the court verdict.
As a result of pent-up frustration, Ms Harriet Kokwera, 78, has petitioned the President, protesting her eviction.
In April, the Permanent Secretary in the Ministry of Local Government compelled Mr Lujumwa, to follow up Ms Kokwera’s complaint. The CAO responded in his July 11 letter, saying attempts by the Hoima RDC to intervene have not yielded tangible results. “When I approached the investors of Hoima Sugar Ltd, they seemed not to know about Harriet Kokwera. After a couple of weeks, they responded to me in a letter, saying Kokwera was not a genuine claimant,” Mr Lujumwa’s letter reads in part.
Her eviction has sucked in State House, which isolates her concern from scores also affected by the eviction.
Daily Monitor has obtained a copy of an August 8 letter signed by Ms Flora Kiconco on behalf of the Principal Private Secretary to the President, Ms Molly Kamukama. The letter directs the Hoima RDC to investigate Ms Kokwera’s complaint and ascertain whether she owned a piece of land and whether she was compensated before her eviction.
In September 2017, the manager in-charge of land acquisition at Hoima Sugar Ltd, Mr Ramadus Raja Khasharan, appeared before the Commission of Inquiry into Land Matters chaired by Justice Catherine Bamugemereire.
Mr Khasharan dismissed allegations that the company evicted residents from the land.
He claimed that some of the residents settled on the land after the company had purchased it from Prince Kimera. “We have not evicted anyone,” he said.
However, the Commission established that some residents who agreed to receive compensation were paid as low as Shs30,000 for half an acre.
Though some families at Kijayo were not affected by the eviction, they continue to live in misery, earning a pittance for their toil at the sugar plantations.
In 2012, the High Court in Masindi issued a temporary injunction, halting the eviction of the locals until the main suit is disposed off. However, the investor flagrantly rejected the orders to evict these families. Though the hearing of the main suit ended in 2016, judgment is yet to be delivered. Judge Simon Byabakama, who presided over the case, has since then been appointed chairperson of the Electoral Commission.

Company accused
Buhaguzi County MP Daniel Muhairwe said the sugar company used corruption and impunity to force people off their land.
Sources revealed to Daily Monitor that some officials in Hoima Sugar Ltd have close ties with power brokers in State House.
Daily Monitor has also established that the Bamugemereire-led commission is seeking mediation between the investor and the claimants.
Hoima District Land Board has distanced themselves from the Kijayo land allocation to the investors. Mr Yostus Ireba, the chairperson of the district land board, says: “I have never reached that place because of the nature of our work. Our board has no transport to investigate such cases.”
He adds that the district land board is not responsible for the conflict because the land belonged to a private person who decided to sell it to investors.
However, Mr Ireba is concerned about the conditions in which these landless Ugandans are living in. “Those are our people; why should they be displaced?” he said.
Bunyoro Kingdom prime minister Andrew Kirungi Byakutaaga says there has been a scramble for land since the discovery of oil and gas. He says many of the kingdom subjects have been arbitrarily evicted.
“We have been asking government to mitigate the challenges that arise as a result of such evictions,” he says.
Bunyoro’s historical land problems have spilled over after the discovery of oil, throwing the locals into the throes of despair.