IN December 3, 2018 BY witnessradio.org 880 views Leave a comment
land, livelihood and investment Livelihood 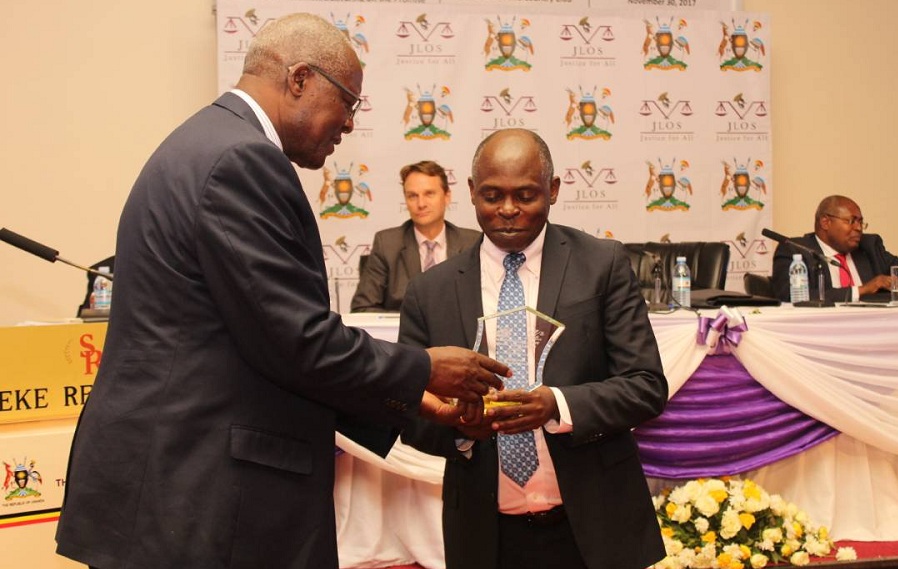 Key members of Justice, Law and Order Sector (JLOS) are being targeted and used by land speculators and grabbers to frame frontline land defenders with criminal charges to harass, intimidate with intention to silence critical voices, witnessradio.org can reveal. JLOS is a sector wide approach adopted by the Government of the Republic of Uganda.

The key members being targeted and used by land speculators and grabbers include Uganda Police Force; Judiciary; Directorate of Public Prosecution; and Uganda Prisons Services.

Witnessradio.org has recorded patterns of land defenders’ harassment tracking over one and half decades majorly manifesting in central (Buganda) and mid-west (Bunyoro) sub regions due to minerals and geographical positioning to international and national markets.

Land defenders (community leaders elected by natives facing eminent eviction threats, such people help communities to engage lawyers, both technical and political leaders at all levels; local council chairpersons; councillors at lower and districts’ councils; and NGOs among others) are being targeted with charges ranging from criminal trespass, theft, incitement to violence, aggravated robbery, to murder among others.

The JLOS under-use institutions have orchestrated torture, longterm imprisonments, deaths, disappearance of files, intimidation and harassment that have costed local families’ livelihood and survival, destroyed their (natives) sense of belonging, caused school dropouts and early marriages among teenage girls whose breadwinners are in prisons for refusing to surrender their land for land based investments.

In 2014, a Nyamasoga local council One (1) chairperson Ologa died in Masindi Central Prison while serving his three (3) year jail sentence. Late Ologa in his early 70s was convicted alongside with six (6) others of assault and malicious damage to property. In Mid 2013, Buliisa district police aided the arrest of late Ologa, maliciously charged and prosecuted him with assault and malicious damage to property charges. Ologa was being punished for refusing to collaborate with a ‘rich-man’ to grab a piece of land in his village (Nyamasoga) hosting quarry-stone deposit. According to sources, ‘a rich-man’ had developed interests in a quarry-stone deposit, which he planned to sell to contractors of Hoima – Wanseko road. Because Bunyoro sub-region land is customary and communally owned (people have no land titles), its very easy for a wealthy person to emerge from nowhere to claim land ownership as long as he/she has got interests in a particular land. These and other issues have caused land wrangles and a number of people have ended up in prisons.

On October 9th 2018, police aided an eviction without a court order of over 3,500 people who have lawfully been occupying five villages namely, Kambuye, Kikono, Kyabaana, Kanseera and Lwensanga in East Division, Mubende Municipality, Mubende district. The targeted land is registered on Block 168, Plot 19, 22 and 23 covering over 322.5 Ha claimed to owned by one Kaweesi George. In a process of reacting to save the poor people from fraudulent eviction, 14 land defenders including Municipal council councilors namely; Nantubiro Grace representing Busaale Ward and Mugwabya Ronald representing Kaweeri ward on Mubende Municipal council (Local council 4). They were arrested, charged with nine (9) counts including aggravated robbery and remanded to Muyinayina government prison. They are expected to return to court on 5/12/2018.

In 2009 shortly after the oil drilling started in Bunyoro sub region, the Kasenyi Local Council One (1) Kaliisa Julius Nange plus his three brothers were arrested, kept in police cells for 45 days, later charged and sentenced to two years in prison because they protested against a rich man from grabbing their family land, which hosted the first oil well (Ngiri-1). “A rich-man came and asked me to sign documents that would certify that he rightfully owned land where Ngiri-1 oil well was located. I vehemently refused and asked him to approach my grand father who would sanction his ownership. Shortly after, the rich-man with impunity brought iron sheets and poles on the land and constructed a three bedroomed house to seal his land ownership bid. I petitioned the office of the Resident District Commissioner (RDC) who later advised us to go to court that her office had nothing to do with our case” Said Kaliisa. He further explained in 2012/13, Ngiri-4 and Ngiri-7 wells were also drilled on their land and our campaign to expose the rich-man was enhanced. “During that time, I got arrested by Buliisa police, kept in cells before being transferred to Masindi Chief magistrate Court, which is 70 kilometers from Buliisa and later I was remanded to Masindi Central Prison for two months. I was later granted and stayed on a court bail for one year but I was conditioned to report every after three weeks for a full year before I and other suspects got convicted” Kaliisa narrated. He added that he suffered intimidation, harassment and psychological torture.

The 2007/8 economic crisis effects to Uganda is causing extreme socio-economic inequality which is becoming more acute. Uganda’s middle class (a few) which has access to power and money in terms of control over land is making the situation both unjust and unsustainable to majority native communities.