special investigative programmeland, livelihood and investmentThe Agony of a Tree-Planting Project on Communities’ Land in Uganda 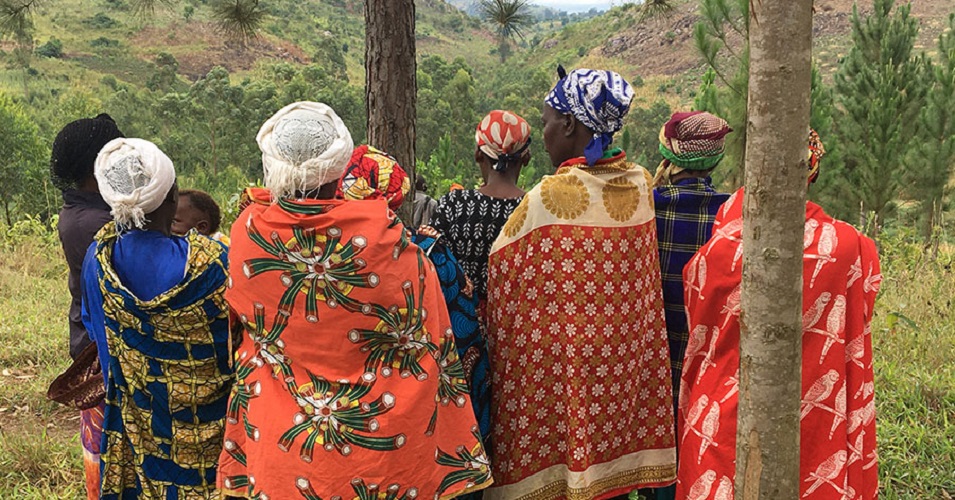 Some mothers who lost children due to the lack of food after New Forests Company’s evictions. Ph: witnessradio.org

The large-scale plantations from UK-based New Forests Company (NFC) have meant violence, forceful evictions and misery for thousands of residents from Mubende, Uganda. More than 15 years after the company began its operations in Uganda, affected communities still confront the long-lasting and severe damages.

Misery is what fills the hearts of the residents of seven villages in the Mubende district where the New Forests Company illegally evicted close to 1000 households from their land.

The UK-based New Forests Company (NFC) was founded with the vision of creating “sustainable timber products” in East Africa amidst rampant deforestation NFC plantations are also a carbon project, which generates additional profits for the Company from the selling of carbon credits. The first tree was planted in Mubende, Uganda, in 2004. Since then, the Company has rapidly expanded with four new plantation areas in Uganda as well as in Tanzania and Rwanda.

The expansion has however come with unimaginable pain to hundreds of households and gross human rights abuses, mainly in the Mubende district. Between 2006 and 2010, more than 10,000 people were evicted from their lands in the district of Mubende, in some cases with the use of violence, to make way for the NFC plantations.

NFC and the World Bank, one of the Company’s financial supporters, were once in dialogue with their evictees but abandoned them. According to documents seen by Ugandan media platform witnessradio.org, NFC was dragged into dialogue with its evictees after a critical report exposed in 2011 the lack of respect for communities’ human rights in the name of a carbon credit project. (1) The report, which was released by the NGO Oxfam, accused NFC and its security agents for committing human rights violations/abuses with impunity. The World Bank appointed a mediator from the Office of Compliance Advisor/Ombudsman (CAO). The CAO handles complaints from communities affected by investments made by the International Finance Corporation, the private sector arm of the World Bank.

By 2011, NFC had attracted investment from international banks and private equity funds. These include the European Investment Bank (EIB), EU’s financing institution, that had loaned NFC five million Euros (almost US 6 million dollars) to expand one of its plantations in Uganda. The Agri-Vie Agribusiness Fund, a private equity investment fund, focused on food and agribusiness in sub-Saharan Africa, had invested US 6.7 million dollars in NFC. Agri-Vie is in itself backed up by development finance institutions, notably the World Bank’s private sector lending arm, the International Finance Corporation (IFC). But the most significant investment came from UK bank HSBC (around US 10 million dollars), which gave HSBC 20 per cent ownership of the Company and one of the six seats on the NFC Board. All these investors have, in theory, social and environmental standards in order to maintain and manage their own portfolios.

After a15-months long dialogue facilitated by the CAO, evictees were offered very little compared to what they owned before. The little payments were not based on the results of any valuation exercise to assess what the evictees had lost due to the violent and forceful evictions.

Witnessradio.org has uncovered that during the dialogue, NFC forced evictees to establish a Cooperative club if they were to get any payment from the company. Also, evictees were forced to pay subscription fees to become a member of the club and benefit from the company’s contribution. Many could not afford this fee, but the handful of people that managed to pay their subscription fees to the Cooperative, were at the end of the day given an acre of land each (less than half an hectare). Only 48% of the 10,000 evictees received this piece of land.

Our investigations indicate that after NFC paid 600,000,000 Uganda Shillings (close to US 180,000 dollars) through the Cooperative club’s account for 8,958 hectares of land and other damages suffered by the evictees, the stakeholders involved abandoned the evictees to suffer the anguish.

The Company’s plantations have shuttered lives and caused irreparable damages to the affected communities.

According to the evictees, NFC’s plantations have caused a big number of deaths among children due to malnutrition. At the time of the evictions, all children dropped out of schools and married at a tender age. Further, many families of the evictees began to live in refugee camps after failing to obtain food to feed their families, while hundreds of families broke up. And the list of long-standing impacts goes on.

The testimonies of forceful evictions and lack of due compensation overshadow the social development projects that the company flags whenever it talks about its achievements.

Shantel Tumubone, aged 50, and her family, was evicted 10 years ago from their ancestral home in Kyamukasa Village, Kitumbi Sub-county, Kassanda District. They were promised compensation that would enable them to find alternative land for their settlement.

She moved to a nearby village as she looked for land in anticipation of receiving compensation. “I have waited for the money to date. There is no single coin that we have received as compensation and we don’t know if it will happen” Tumubone, whose hope is fading away, tells witnessradio.org.

After waiting in vain, Tumubone managed to get casual employment on a farm in the Kabweyakiza Village, which is a few kilometres from where she used to live with her family. Having lost everything during the eviction, Tumubone later lost her husband because they could no longer afford the medical bills. Even worse, she did not have where to bury her husband and, thus, a swap deal was made between her and the plantations company: in exchange of her carrying out casual work in the plantations for eight months, the Company would give her a piece of land in her former village valued at 1 million Uganda Shillings (around US 270 dollars) so that she could bury her husband.

Tumubone is one of the many people who have been driven into poverty and landlessness by the New Forests Company. People who used to own land for cultivation and survival have been turned into beggars, while several others have become labourers at the Company working on what used to be their land.

Many of the people that Witnessradio.org spoke to dispute reports of due consultation and of compensation for alternative land.

“We were never consulted or agreed to what the New Forests Company did. We have been reduced to paupers and who would choose such a life. I personally used to own 15 acres [6 hectares] of land where I planted a variety of crops,” said one of the residents who is now a casual labourer at the Company’s plantations.

Despite all this, in its 2011 report to the UN, the New Forests Company claims that the people vacated their land voluntarily and peacefully, which does not tally with the situation at hand when you talk with and listen to the affected communities.

What is also striking is that NFC managed to obtain an FSC certification for its plantations, which allegedly vouches for a company’s “socially beneficial” practices. The FSC certification is supposed to ensure that products with the seal come from responsibly managed plantations that provide environmental, social, and economic benefits.

In an audit report conducted in 2010, FSC declared regarding the evictions that the company had followed peaceful means and acted responsibly.

With the situation in the areas where the New Forests Company is implementing its tree planting projects, there is no doubt that the company is flouting the certification company’s standard criteria in acquiring land. In consequence, many homeless people have been left with limited hope of returning to their land and homes.

The chairperson of the displaced households, Mr. Julius Ndagize, has said that several meetings with the managers of the New Forests Company have not been fruitful.

“The Company only managed to resettle a few families after we managed to secure 500 acres [200 hectares] of land in Kampindu Village, where each family managed to get an acre of land and the rest are landless”. Says Mr. Ndagize.

Background to the increasing large-scale investment

Following the spike in commodity prices in 2007-2008, investors expressed interest in 56 million hectares of land for agriculture and timber production, and Sub-Saharan Africa accounted for 2/3 of this expressed demand. Despite the poor record of large agricultural investments in Africa and parts of Asia, the global median project size of 40,000 hectares implies that these investments could have major implications for rural land rights and existing land users, especially smallholders.

Alarmingly, countries with weak legal frameworks for recognizing rural land rights as well as poor environmental regulation for business operations are most likely to be targeted by large-scale investments.

The Ugandan constitution states that “land in Uganda belongs to the citizens of Uganda”. But stories of non-compensation for over ten years point to gross abuse of the Ugandan law and total abuse of the citizens’ rights to whom the land belongs.

The impacts of forced evictions go far beyond material losses, leading to deeper inequality and injustices, marginalization, and social conflicts.

With the evictions happening in Uganda unabated, there is no doubt that the margin between the rich and poor is widening on top of gross abuse of human rights.