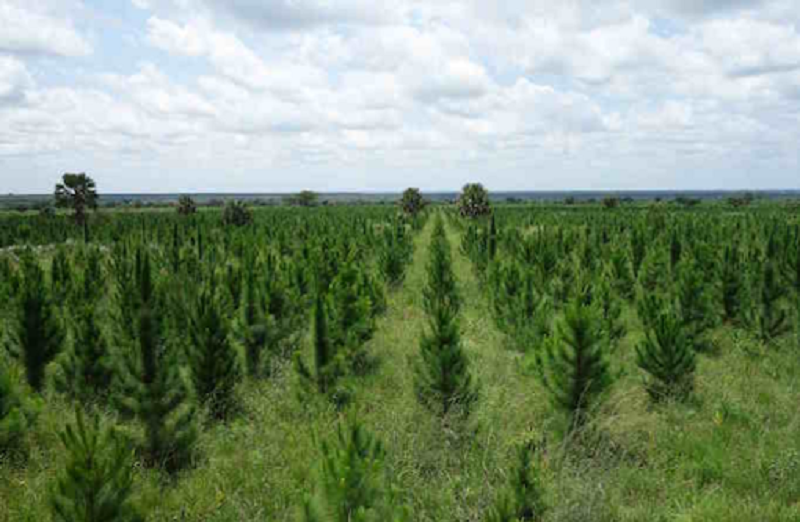 20 years of suffering monoculture effects in Uganda, more hectares of land benefiting local communities continue to be given out to investors for monoculture tree plantations. Forest give aways are done for the cheap, short term economic gains at the expense of environment and people, without proper assessment of the vital roles of the forest…

Uganda like many other African countries is in the campaign drive of promoting plantations under the guise of creating income and other benefits for Ugandans, destroying a lot of natural resources including forests, wetlands and up hills. In the past ten years, thousands of hectares of forests have been destroyed and replaced by monocultures.

But Uganda shows, at the same time, a commitment internationally to forest protection and reducing deforestation as one of the countries in Africa participating in REDD+. After its Readiness Preparation Proposal (R-PP) was approved at the 9th meeting of the World Bank’s Forest Carbon Partnership Facility (FCPF)’s Participants Committee (PC), based on the status of Uganda´s forest and its benefits for forest dependent communities and forest owners, Uganda will receive US$3.4 million to prepare a REDD-+ strategy, a reference scenario and a system of measurement, reporting and verification (MRV).

However, this commitment contradicts with the current expansion of monoculture plantations in the country. An example happened when in August 2011 the government decided to use the shortage of sugar in the country as an excuse to propose to give away 7,100 hectares of forest land to MEHTA, the owner of Sugar Corporation of Uganda (SCOUL), to expand its sugar plantation. People resisted, including reporting in the media, the local leaders and also CSOs while the international community was also made aware, amplifying the voices of Ugandans and forcing the government to halt the giveaway of the forest.

A country like Uganda, which is signatory to a number of conventions like CBD and Ramsar (on the issue of wetlands), shouldn’t have thought of giving the forest for the cheap, short term economic gains at the expense of environment and people, without proper assessment of the vital roles of the forest and also without understanding the various underlying causes that lead to failures within the sugar processing industries. It is worth noting that the current machinery used in the extraction of sugar from the canes is outdated. It dates back to the 1960s which means that the efficiency has gone down. In other words, sugar production could be increased by improving technology rather than converting more forest lands into arable land for more monocultures. And in spite of Uganda´s commitment in halting deforestation, projects like this one encourages deforestation and forest degradation

In the same vein, the Ugandan government is promoting oil palm plantations in Kalangala, funded by a number of financial institutions like IFAD/World Bank and oil palm companies like Wilmar and others. A lot of contradictions and violations have been recorded including disrespect of the CBD convention, with a lot of flora and fauna being destroyed. Again, the government has double standards promoting oil palm at the expense of natural forests and promoting REDD+ allegedly for the conservation of forests. Around 10,000 hectares of land have been planted with oil palm. People in Kalangala have been deprived of their rights to clean water and a sound environment, they are exposed to cultural erosion, their livelihoods have been compromised, and they face food insecurity just to mention but a few of the consequences.

Another example of a plantation project with impacts on local communities is in Kikonda, forest , in the Kyankwanzi district, where the South Africa-based firm Global Woods established a pine plantation in 2002, displacing traditional communities who have been using the forest reserve for agriculture. The impacts of that action are even being felt today.

Also REDD initiatives, as is the case with plantation development, have been causing impacts on local forest-dependent people in Uganda. For example, due to a REDD programme, the government evicted indigenous groups. The ‘pygmies’ of the Semliki forest have been living in the forests since time immemorial but the Uganda Wildlife Authority (UWA) – in close collaboration with the National Forest Authority – evicted them as if they were encroachers.

Uganda must develop a mechanism that regulates plantation development in such a way that it does not override the existing natural forests and the rights of the local people. Any meaningful development should put people at the centre and include social aspects. Moreover, the case of Uganda reveals that a common approach is needed, so that both the forest destruction gets really halted and development projects like plantations do not have negative impacts on people and the environment but are set up in such a way that they can benefit people. Such a project design can only take place if people are meaningful involved and able to give their consent or not to development plans with huge impacts on their livelihoods.