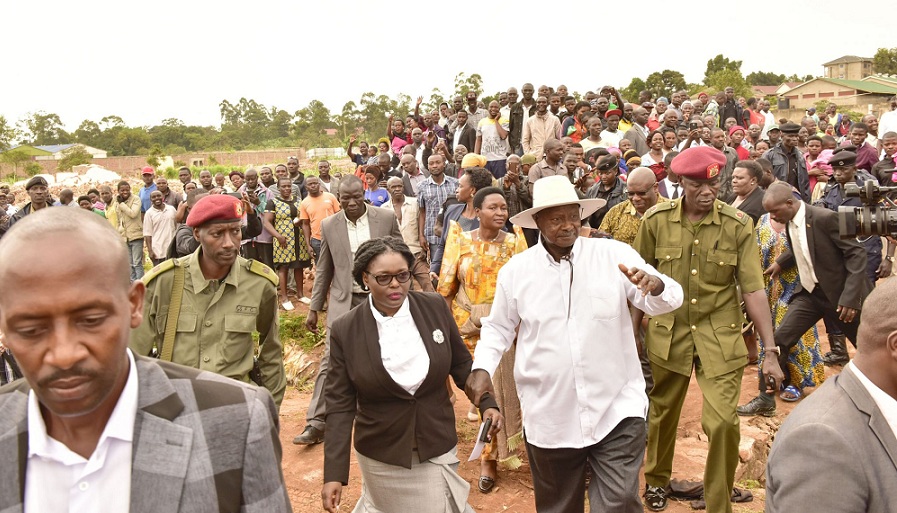 President Yoweri Museveni has ordered an inquiry into an appalling land eviction matter in Lusanja Parish in Ssekanyonyi Zone, Nangabo Sub-County Wakiso District where over 70 families were evicted and 350 houses destroyed affecting over 550 people.

The eviction reportedly started in mid this month on a 9.6 acre piece of land, allegedly on the orders of a one Kiconco Medard.

Addressing the gathering today in the morning, President Museveni informed people of the area in particular and Uganda in general that in the Constitution of Uganda of 1995, the law on land is very clear and stipulates that a person who was on a piece of land for 12 years by the time that constitution was promulgated, is a rightful owner and that a person who was on land after 1983 is a bona-fide occupant/squatter who holds a right to negotiate and dialogue with the land owner for settlement.

The President told the people that he had stepped into their land eviction matter as a freedom fighter on the side of the people’s rights, adding that “the happening of this incidence was uncalled for.”

“Even an illegal occupant on the land should be allowed possible negotiations to vacate the land normally,” he said.

According to Sekanyonyi Zone LC1 Chairman, Fred Kanyike, 350 houses have been demolished and 200 more are threatened with destruction.

President Museveni, however, assured the residents that there will not be anymore destruction of anyone’s property. He, therefore, ordered for investigation into the matter and that the culprits be apprehended.

He told Office of Prime Minister Office to provide shelter for the evicted victims, food relief and other necessary contingencies as government assesses the value of the property destroyed and considering possible compensation.

President Museveni addressing some of the affected families in Lusanja, Nangabo in Wakiso district whose homes were demolished yesterday leaving them homeless.

President Museveni further warned all those people that are involved in fraudulent land evictions saying that in such incidences, the parties involved should wait for the law to take its course.

Mr. Museveni also stopped the people who at one point turned unruly and began removing corrugated iron sheets that had been used as a fence and poles around the boundaries of the land in dispute.

He reminded them that their act could be branded as a misfortune involving the destruction and possessing property that does not belong to them adding that to retaliate using evil against evil is ungodly. “Do not behave like thieves,” he said.

The Land Inquiry Commission’s observation report says that although the said owner of the land, one Kiconco Medard, acquired the land in 2016 with the bibanja holders already on it, he ought to have compensated the squatters before any evictions would be effected.