The minister for local governments Col. Tom Butime has pledged to respond to the overdue demand for the split of Kasese district.

Col. Butime was the chief guest at a swearing in ceremony for the leadership of the newly Rugendabara-Kitoro town council a function that was held at Rugendabara primary school on Tuesday, 24th August.

Col. Butime says that he was convinced that there is consensus to have the district split and pledged to solve the issue while in Kampala.

His statement follows several demands from different dignitaries that attended this event.

Col Butime, who advised the leaders to transform the local economy and fight poverty through private partnership and ensure environment protection added that urbanization was the way to go as far as economic growth and transformation is concerned.

The mountains in Mahango sub-county in Kasese are picturesque.
Related Topics:Kasese districtLocal Government
Up Next

Ugandan army to punish soldiers for torturing Journalist in Kampala 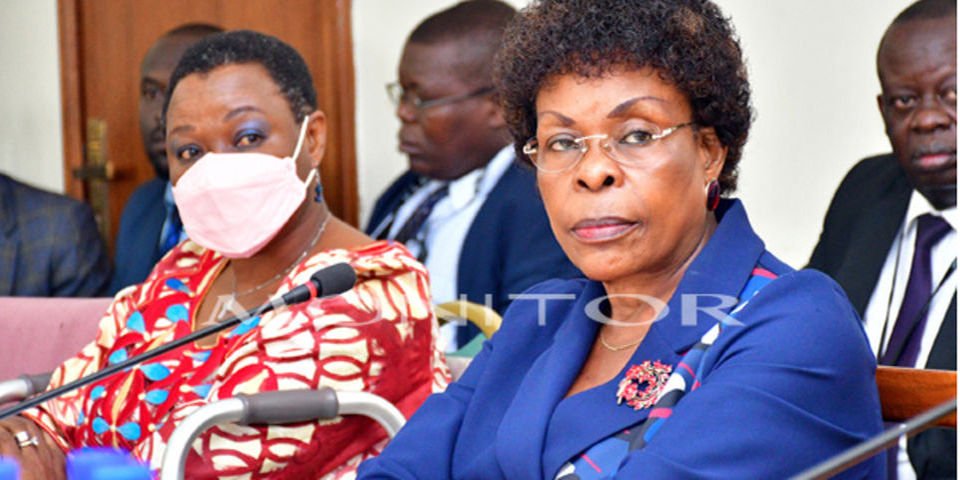 The two government officials have been red flagged for “illegally clearing” the release of Shs10.6b that was paid to ghost claimants in 2020.

The Cosase report that was presented to the House on Thursday, also recommends that Mr Patrick Ocailap, the Deputy Secretary to Treasury, be “punished” for not thoroughly scrutinising the request for the release of the money.

Mr Ocailap was deemed to be at fault because he was acting on behalf of the then Secretary to the Treasury, Mr Keith Muhakanizi, who was at the time out of the country.

“Mr Matia Kasaija, Minister of Finance, Planning and Economic Development, and Mr Patrick Ocailap, the Deputy Permanent  Secretary and Secretary to the Treasury, should be investigated for their role in the Shs10.6b supplementary process,” the report, which also pins officials from Uganda Land Commission (ULC), reads in part, adding in another passage; “Management admitted that although the…supplementary was received and spent by ULC, the Commission did not initiate the request for the said money.”

It further revealed that Ms Beatrice Byenkya, the ULC chairperson, informed Cosase that she was never “consulted at all regarding the request for the supplementary budget, and neither was the Commission.”

ULC officials were also faulted for “conniving” with lawyer Richard Buzibira to forge court documents in regard to compensation.

“The lawyers from Lubega, Buzibira and Company Advocates should be prosecuted for aiding the fraudulent transaction,” the report states, adding, “Disciplinary action should be taken against Denis Kahabura, the registrar of Kibaale, for issuing a title based on forged documents.”

The crux of the matter was that the Shs10.6b release was effected by the Finance ministry following a request of Ms Kamya in her capacity as Lands minister at the time.

Cosase revealed that—without providing proof—the sidestepping of the ULC was informed by “a presidential directive.”

The report was stinging in its recommendation of punishments for ULC officials deemed to be in cahoots.

“Ms Barbara Imaryo, the then accounting officer, and Mr Siraje Isabirye, the head of accounts, should be prosecuted in regard to the ghost payments in the supplementary,” the report reads.

It adds: “Uganda police should work alongside Interpol to have Barbara Imaryo brought back into the country to face prosecution.”

During its investigations, the Committee also established that the entity is under staffed, besides the high staff turnover challenges stifling work at the entity.

“The Committee was concerned that ULC has no legal department despite the need for frequent legal advice and the high number of litigation cases. The top management has officers in acting capacity, while a number of lower staff are missing,” the report discovered.

Specifically, it was established that the “staff approved structure is 75; however, only 33 are in post and 42 positions are vacant. This indicates a staff workforce of 44 percent available to execute the Commission mandate.”

Ombudsman Kamya’s troubles stemmed from the Auditor General’s report of Financial Year 2020/2021 that unearthed the ghost claimants compensated by the ULC.

Attempts by Sunday Monitor to get a comment from the ombudsman about recommendations of the report proved futile by press time. The Finance minister, meanwhile, told us “they are most welcome to investigate. That’s all I can say.”

ULC on the spot over land allocation to investors 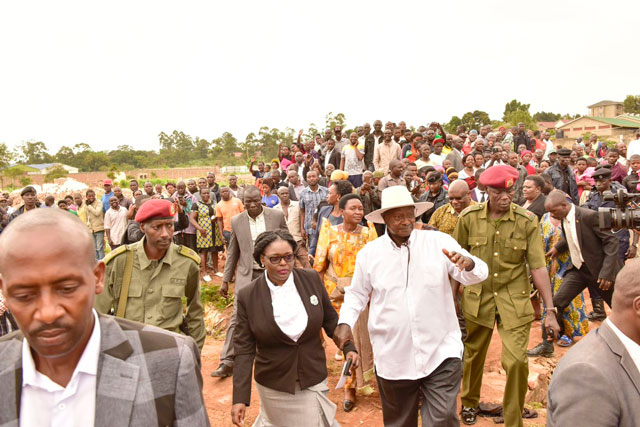 Kyangwali , Uganda.The more than 1,000 people evicted from their ancestral land in Kyangwali sub-county in Kikuube district are protesting a letter authored by President Yoweri Kaguta Museveni referring to them as liars who want to steal government land.

The residents who have pitched camp at the office of the Kikuube Resident District Commissioner-RDC since February state that they are the genuine owners of over 36 square kilometres of land which is now under dispute between them and the Kyangwali Refugee Settlement. They are mainly women and children who were evicted from the villages of Bukinda, Kavule, Kyeya, Bwizibwera Nyaruhanga, Kabirizi, Nyamigisa and Katoma among others, in the Kyangwali sub-county.

In a letter dated July 17, 2022, President Museveni referred to the evicted residents as liars who want to steal government land. In the letter addressed to Prime Minister Robinah Nabbanja, President Museveni stated that he got a report from Brigadier Henry Isoke of the State House Anti-corruption Unit indicating that the Kingdom of Bunyoro Kitara donated 60 square miles of land in 1960 for the purpose of helping the refugees and foreigners coming to Bunyoro.

He has directed the Prime Minister to order the evictees to accept the 2.5 acres ex-gratia allocated to each family or they forfeit even that one and stop disturbing public peace with their lies. According to Museveni, it is not good to get in the habit of stealing government land or falsely claiming other peoples’ land.

But the aggrieved residents say that the president is being misled about the conflict adding that most of the people he sends on fact-finding missions about the land go to the area when they are already compromised and feed him with wrong information.

Laurencio Tibesigwa, 70, one of the affected residents explains that his grandparents settled on the land in the 1950s, long before the said acquisition by the government and wonders how the government came to acquire the same land. He demands that the president visits the area to establish the truth about the said land.

Justine Kusiima, 73, another of the residents says that people who have been sent by the president to investigate the conflict have fed him with wrong information adding that only the president can get the correct information about the land in question.

Staratori Mutagamba, 65, also a resident on the contested land says that the president’s letter has reignited the untold suffering they have gone through for the past 13 years yet they thought that he who would be their saviour and resettle them on their ancestral land.

Officials from the settlement and the Office of the Prime Minister have been feuding with the residents since 2013 over the ownership of the land in question. In September 2013, the officials from the Office of the Prime Minister backed by the police and UPDF evicted more than 60,000 people from the contested land and resettled Congolese refugees on the land.

The residents were forced to settle in camps in Kyeya village in Kyangwali sub-county under very poor conditions where they have stayed to date. In 2016 and 2018, President Museveni ordered that the evicted residents be resettled on their ancestral land.

In October 2021, Prime Minister Nabbanja halted all the activities by her office on the contested land.   This was during her visit to the area to assess the condition of the evictees where she discovered that some officials from the OPM and Kyangwali refugee settlement area had connived to erect structures for refugees on the contested land, planted crops like beans, maize, cassava, bananas and groundnuts among others.

According to Nabbanja, this could be a move by some OPM and Kyangwali refugee settlement area officials to fraudulently grab the land from locals neighbouring the settlement. She ordered the Minister for disaster preparedness, the Camp commandant of Kyangwali refugee’s settlement area, Kikuube District Police commander-DPC and Resident district commissioner-RDC to ensure that no more activity takes place on the contested land until investigations into the wrangles are completed. 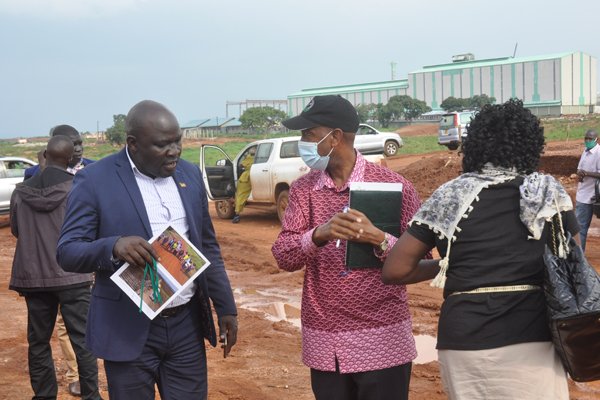 On Monday, the farmers under Atiak Sugar Outgrowers’ Cooperative Scheme told journalists in Gulu City that they had also petitioned Parliament over the matter.

It is established that the claimants, who are also Lord’s Resistance Army war victims, renewed their pay demands recently when they discovered that the company closed Atiak sugar factory in Amuru District a few months after it received a Shs108b bailout from the government.

Ms Rosemary Achan, one of their leaders, said each of them demands the company Shs25m for the three years.

“This time we will do all it takes to get that money because we understand that the government gave them money to pay us, but unfortunately, they have shut down the factory,” she said.

“Initially, they told us that we would be paid in the second year of the work after the canes matured but the time passed and since then, they have been dodging us,”  she added.

This newspaper established that the victims were each assigned five acres of sugarcane to manage and would be paid Shs25m per year.

Mr Patrick Poly Okin Ojara, the Chwa MP, said they are preparing another petition for the Inspectorate of Government to investigate the firm and ensure that the funds are properly accounted for.

“The company and Naads came to Parliament last year for a supplementary budget and after they were granted the Shs108b, they decided to close the factory yet part of that money was meant to pay the pending wages of these victims,” Mr Okin said.

Mr Gilbert Olanya, the Kilak MP, said they cannot allow the government to continue spending billions of shillings on a factory that is keeping thousands of people jobless.  The government owns 44 percent of shares in the factory.

However, Mahmood Abdi Ahmed, the company’s director for plantation and agriculture, dismissed the claims of non-payment.

“If they claim they were not paid, the best people to comment on the matter are the chairpersons of the two cooperatives under which the claimants fall,”  Mr Mahmood said.

“We got funding from the government to plant the canes, and there is no employee who worked for us and was never paid, including the outgrowers whose money was channelled through the cooperatives’ leadership,” he added.

But Ms Joyce Laker, the chairperson of Atiak Outgrowers Cooperative Society, said the company only paid them for the seed canes and that money was given to the members directly not through the cooperatives between 2019 and 2020.

“The money we received was for the seed canes and most of it was deducted for the membership fees and annual subscription of the more than 2,000 members in our association,” Ms Laker said.

“[A total of] 182 members were paid. The rest of the unpaid members’ concerns can only be answered by the company,” she added.

Thousands of smallholder farmers in Uganda have forcefully lost their land in exchange for carbon offset projects.

THE NEW EU DIRECTIVE ON DUE DILIGENCE – A RELEVANT STEP TOWARDS ENDING CORPORATE IMPUNITY?