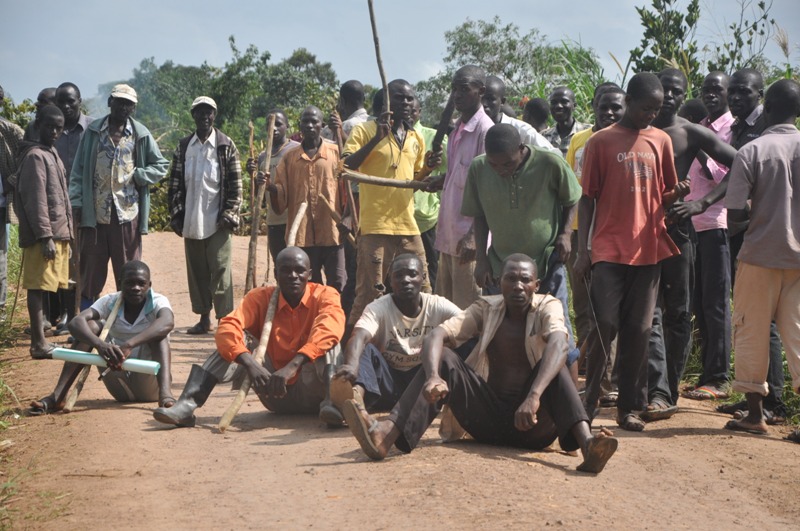 Moses Ssebunya, a city tycoon exhibited impunity after hiring armed guards working with Saracen, a private security firm to fire bullets to scare over 2,000 people that are disputing his land ownership in their village.

The fracas followed the unusual deployment of armed men throughout the village, raising residents’ eyebrows to approach some of them to know what they were up to.

Residents understood that Ssebunya together with his wife Miriam Kyomugisha , had hired these armed men to protect a four-square mile land situated on block 410, plot 5 which he calls his personal animal farm-land on which heads of cattle and flock are being grazed.

This deployment notwithstanding, it was not an easy ride for the family with land grabbing appetite to evict defiant residents who insisted that neither Ssebunya nor his wife Kyomugisha is the legitimate owner of the land under contestation.

They explained that whenever they try to send Ssebunya’s animals away from their gardens, the deployed guns react with firing gunshots in the air and sometimes arrest those residents who are obstinate.

Eddy Byaruhanga, the officer in charge of Kikandwa police post said that they didn’t have any knowledge of the existence of armed guards on the disputed land and therefore pronouncing Ssebunya’s deployment illegal.

However, Kyomugisha confirmed deployment of armed guards but hastened to say that it was only intended to protect their animals on the farm which had been regularly getting stolen on top of being injured by the residents who were tilling it illegally and without their permission.