IN June 19, 2020 BY witnessradio.org 474 views Leave a comment
land, livelihood and investment Livelihood 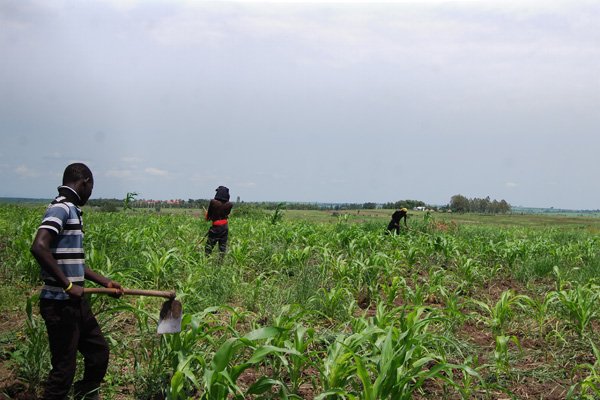 Contested. Casual workers weed a maize plantation on one of the farms within the contested area at Obira East Village, Gotapwoyo Sub-county in Nwoya District on April 20. PHOTO | TOBBIAS JOLLY OWINY

An upsurge in wrangles over land between the Jonam and Acholi communities in former Aswa-lolim Game Reserve in GotapwoyoSub-county, Nwoya District, has claimed at least 10 lives and left scores injured in the past one year.

The incident occurred when an unidentified number of locals armed with machetes, bows, arrows and spears allegedly attacked a UPDF detach on a disputed piece of land within the former game reserve owned by Lt Gen Charles Otema Awany, the UPDF Reserve Forces commander.

On June 8, police at Pakwach Central Police Station blocked a group of more than 100 demonstrators from crossing Pakwach Bridge as theyattempted to show grievance over the killings and mistreatment of their colleagues.

The district police commander, Mr Frank Muzura, said the demonstration was against the presidential directives on Covid-19, which prohibit gatherings of more than 10 people.

Efforts to reach Gen Otema via his known telephone contact over the issue have proved futile.

“On behalf of the Awany family, we have never grabbed any land there, he (Gen Otema) has not even cheated any landowner of a penny, we paid for all we have there, including buying others’ interests there,” Mr Todwong said.

Mr Todwong claimed Gen Otema had leasehold titles from the district land board for the contested land including that at Obira Village where the shooting happened.

Although survivors claim they had gone to Gen Otema’s farm to negotiate for release of their properties that had been confiscated by the soldiers who ordered them to vacate the land, police said the victims were armed and intended to attack the soldiers.
The incident brings to 10 the total number of people killed over land contests within the area between May 2019 and May 2020.

Mr Ben Latim Openy, the Gotapwoyo Sub-county chairperosn, said of 14 incidents of attacks, members of the Jonam community that crossed from Pakwach District had committed 12.

“The claimants ignore our offices and that of the sub-county land committee, and instead report to Pakwach authorities accusing Acholi of displacing them,” Mr Openy added.

Although Gen Otema reportedly possess at least 10,000 acres within the former game reserve, we could not independently verify this from the district land office.

“Several mediations in the past by the political and cultural leaders have not helped. The Lands ministry must come to the ground and declare the status of this land so that the matter is sorted out once and for all,” Mr Openy said.

In 2014, a meeting convened by Mr Todwong (then Minister without portfolio) to resolve the dispute between the Acholi community and Jonam people over ownership of land turned rowdy when the Jonam accused theleadership of Nwoya of threatening to evict them from an area they once occupied for decades before fleeing to West Nile for safety when the Lord’s Resistance Army war intensified.
Mr Todwong then prematurely closed the meeting.

Last year, the two tribes were embroiled in a heated conflict over a compensation scheme by Uganda Electricity Transmission Company Limited (UETCL) for a 9sqkm stretch of land at Yagopino, in Gotapwoyo Sub-county, Nwoya.

UETCL assessed 45 project-affected persons reportedly of Acholi origin but a new group of 65 project-affected persons turned up fromPakwach demanding compensation since they are the rightful owners of the land.
Leaders speak out
Mr Ruoth Moses Ogenwrot Omach, the leader of Paroketo Parish in Pakwach, on Monday warned that unless the two tribes urgently sit and mediate the matter, the situation could get out of hand.

“We don’t want to be pulled into the situation of Madi or Acholi in Apaa because some parties failed to play their cards rightly. After the insurgency, people resettled there again and the land board needed to act impartially,” Mr Omach said.

On Tuesday, Mr Emmanuel Ongiertho, the Jonam County Member of Parliament in an interview with Daily Monitor, blamed the protracted conflicts over the land on the Nwoya District Land Board whom he said had failed to act impartially and objectively in issuing out the land.

“We have records of so many of our people whose application documents for the land have never been validated from the time whthe land was still under Amuru. That problem has persisted, the land board considers more those from the Acholi side,” Mr Ongiertho said.

Because of delayed consideration of their applications, Mr Ongiertho said many Jonam people settled on the land although it was never inspected.

He added that the same land was allocated by the district to other developers, sparking conflict.

“Unfortunately, the Acholi chief, Rwot David Onen Achana is still out of the country, otherwise we would have held a meeting to seek solutions” Mr Ruoth Ogenrwot said.

He added that thousands of Jonam people are peacefullysettled in Amuru District because their land board allowed them to apply for the land they previously occupied.
But Nwoya District authorities insist that there was no need to inspect the land priorto leasing whether occupied or not since the settlers encroached and settled there illegally.

“It is unfortunate that these victims are fronting customary claims over this land. Instead, our brothers and sisters from across the Nile (Pakwach or Nebbi) come with letters from their districts to claim land there, that is unacceptable,” Mr Zeru Abukha, the chairman Nwoya land board, said.

Mr Abukha said whoever does not have titles to justifyownership of land in that area is occupying it illegally.

“For example, the attackers who were shot dead trespassed into a property owned by Gen Otema. Fortunately, Gen Otema possess a title for the piece of land in question,” Mr Abukha said.

When the colonial government declared the area a game reserve in 1952, the evacuated people were compensated by relocation to safer areas in Gulu, Pader, Lamwo and Amuru while the Jonam were resettled insidePakwach and Nebbi districts.

The status remained so until 1972 when it was degazetted as a wild animal sanctuary and handed to the respective local governments (district land boards).

As early as 2008 following an end to the LRA war, people started to return to the area to settle or do farming, the same period wrangles began to escalate.

However, members of both Jonam and Acholi communities rushed to occupy plots or chunks of land within Aswa-lolim area basing on customary claims.

But any land deal done on a former public land without the involvement of the district land board becomes null and void since one must go through the board to process and possess a deed title, so that they can own the land.