IN October 5, 2020 BY witnessradio.org 229 views Leave a comment
Livelihood 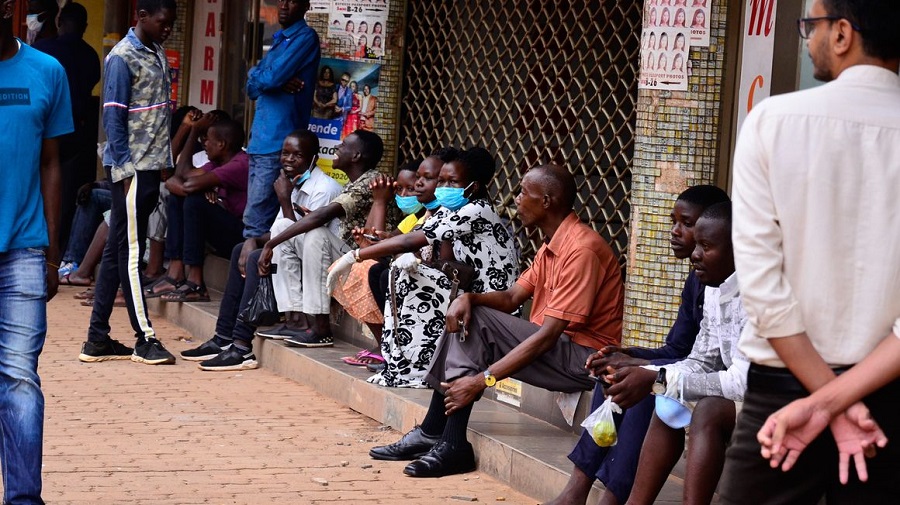 Traders sit outside shopping arcades that were closed to mitigate the spread of coronavirus in March. The Covid-19 disruption on economy is pushing 3.1 million Ugandans into poverty. PHOTO BY ABUBAKER LUBOWA

The Covid-19 disruption on the economy is pushing 3.1 million Ugandans into poverty, the United Nations has warned in a report on socio-economic impact of the pandemic in Uganda.
The “Socio-economic impact of Covid-19 in Uganda” which was released yesterday in Kampala during a high-level discussion on implementation of sustainable development goals, shows that the lockdown and containment measures made 1.9 million non-poor to become insecure and another 1.9 million insecure individuals become poor.
“The increase in poverty among wage earners could be felt most in eastern and northern regions, due to many households already highly vulnerable to poverty in this regions,”  the report reads in part.

The latest report on poverty comes just days after Civil Society Budget Advocacy Group (CSBAG) and Advocates Coalition for Development and Environment (ACODE) in partnership with the Ministry of Finance,  Planning and Economic Development, Ministry of Health, Ministry of Education and Sports, and Ministry of Local Government held a high-level policy dialogue on reopening uganda’s economy this week and asked authorities to focus on the wellbeing of the economy.

“If the pandemic is not contained in the short term and the social distancing measures remains in place, the increase in unemployment is expected to increase the poverty rate among wage earners from 17 per cent to 32.7 per cent,”  the report stated.
The UN recommended: “Cautious borrowing could cushion the economy and improve industry, innovation, and infrastructure, reduce inequality and improve the outlook for zero hunger.”
The resident coordinator of the UN, Ms Rosa Malango, asked government to address the problem of corruption and poor implementation of projects that has left the population in poverty.

Ms Malango said the UN is now engaging private sector players to increase the impact of its poverty eradication programme at grass roots.
“The Covid-19 pandemic has shown us why we must not relax; there will be no post-Covid-19 time. We need to engage our partners on the discussion around corruption and integrity to put the interest of people at grassroots and other vulnerable population at the centre stage,” she said during the conference.

“We are not doing business as usual. We are having engagements with private sector in order to reach the 68 per cent of Ugandans who are in informal economy into formal economy.  The UN has in recent time launched a series of partnerships with JUMIA, ABSA bank Safe Boda. We are also partnering with Stanbic bank to teach savings groups in village financial literacy,” she said.
Ms Malango said they have also partnered with government in the Shs715 billion agro-industrialisation for local development initiative in the Rwenzori Sub-region to address the problem of poverty.

On addressing the poverty and unemployment among youth, the UN Uganda boss said they have also launched a ‘one million sustainable development goal solutions’ from youth in Uganda innovation challenge to support youth startups that are impacting communities and creating jobs. She said more than 500 young people have so far expressed interest.
“During the past five years of the implementation of the UN Development Assistance Framework (UNDAF) from 2016-2020, the UN in Uganda has contributed to several achievements,  including in the area of governance with strengthening the electoral processes and human capital development,” she said.

Through the interventions by UN, learning literacy and numeracy increased at primary (P.6) from 38 per  cent to 52 per cent,  among other achievements, according to Malango.
“The subsequent cooperation framework with government of Uganda and other development partners will focus on empowering youths and skills development, gender equality climate change mitigation among others,” she said.

Human capital development
Dr Arthur Bainomugisha, the executive director of ACODE, said it is important for government to ensure the education sector that is central in human capital development has  proper  management.
“A lot of money has been borrowed in the name of Covid-19 and we want to know how much it is and how it was used. We must never allow entrepreneurs of Covid-19 to thrive while other people are thrown by the pandemic into poverty,” he said.

However, Mr Julius Mukunda, the executive director of CSBAG, said it is important the government focuses investment on real economy such as agriculture that the largest number of the population depend on.
Ms Mary Karooro Okurut,  the minister in Charge of General Duties at the Office of the Prime Minister, said government is committed to ensuring equitable development for all Ugandans.
She said government has integrated the sustainable development goals (SDGs) in the third National Development Plan. The SDGs focus on inclusive development.