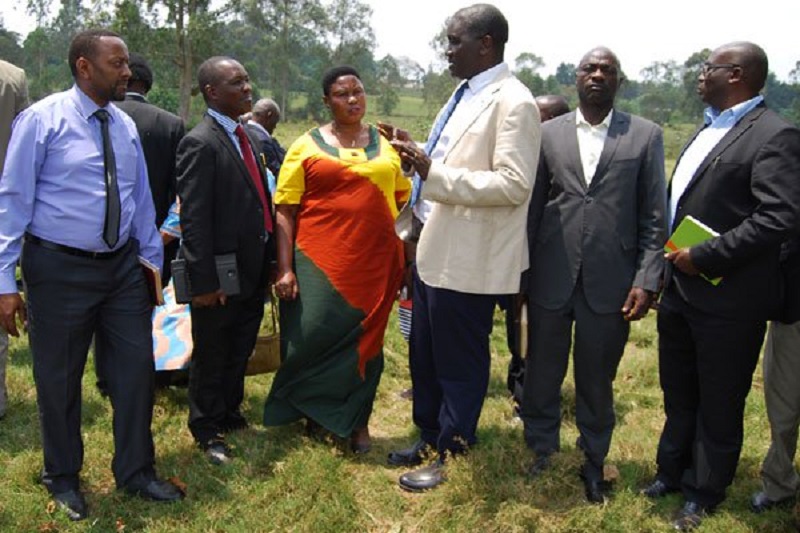 The Permanent Secretary Ministry of Water and Environment, Mr. Alfred Okot Okidi (C) speaks to officials at the event. PHOTO BY RAJAB MUKOMBOZI

BUSHENYI-The United Nations Development Programme (UNDP) has warned that Uganda likely to face a food crisis unless it steps up efforts to protect water bodies, forests, and wetlands against encroachers.

The UNDP team leader on Environment and Climate Resilience, Mr. Onesimus Muhwezi said during a groundbreaking ceremony for the restoration of Nyakabirizi Wetland in Bushenyi District, by the Ministry of Water and Environment on Friday.

“Forget sustainable food production if you cannot have access to water. Water stress and scarcity is becoming a major problem in Uganda because water resources including wetlands and forests have been degraded. Unless deliberate efforts and strategies are put in place to restore wetlands and other fragile eco-systems, including tree planting, the country should be prepared for a looming food crisis in the near future,” Mr Muhwezi said.

He said that Uganda is witnessing a great challenge of wetland and forest degradation with prolonged drought and flooding than ever before which calls for a serious action.

Mr Muhwezi warned said if the degradation of wetlands and forests is not stopped, the country should be prepared for food insecurity.

He said UNDP is committed to supporting the country in addressing its climate change challenges but noted Uganda has to show commitment towards the goal.

The Permanent Secretary Ministry of Water and Environment, Mr Alfred Okot Okidi, said that despite the existing laws to protect the environment, enforcement is a challenge due to underfunding.

He said that only Shs700 million is allocated towards the restoration of wetlands in a financial year, which is not adequate to carry out serious work.

Mr. Okidi said they are working with local governments to formulate ordinances that can be appropriately and conveniently enforced to protect wetlands and other fragile eco-systems.

“These people [politicians] have frustrated our efforts. That’s why I think the mandate to fight encroachment should shift to Chief Administrative Officers and RDCs who are not voted into office,” Ms. Nakamya said.

Nyakabirizi Wetland is one of the 20 wetlands in the country that are being restored with funding from UNDP.