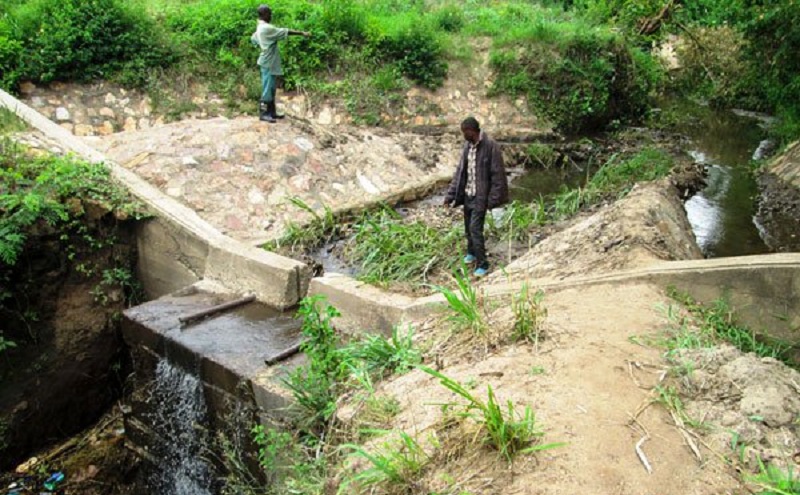 Dilapidated. The dam was built in Muhokya five years ago. It is now covered with grass and has developed cracks. PHOTO BY MORIS MUMBERE
By MORIS MUMBERE

KASESE. An irrigation project that was set up five years ago by the Belgian Technical Cooperation to boost commercial farming in the drought hit area of Muhokya Sub-county, Kasese District, is at the brink of collapse due to alleged mismanagement.
Mr Godfrey Mugisa, one of the affected farmers, said: “We are charged Shs330,000 per season for maintenance yet the Belgian government constructed the dam for the locals for free, but it ended up in the hands of a few rich people, who rule and charge us money and decide who to benefit from the project.”

When Daily Monitor visited the site on Wednesday, the irrigation channels had been blocked with soil and covered by thick grass. The dam was also cracked with its pieces falling in water.
Mr Mugisa said after the construction of the dam in 2012, they were able to control and irrigate gardens of 200 commercial farmers.
He said after the first year of operation, daily maintenance was largely ignored by Muhokya Rutoke Farmers Association, which was in charge of daily operations.

The farmers said no maintenance works or repairs have been conducted over the last three years yet the farmers’ association committee cannot account for the money being contributed.
The water engineer, Mr Koen Sneyers of the Belgian Technical Cooperation, said: “Despite close community involvement and alignment with the district development priorities, the irrigation dam has become a private asset for local leaders.”
Mr Sneyers added that the irrigation infrastructure was able to successfully irrigate 100 hectares of commercial gardens and also concurred with the farmers that lack of regular maintenance has led into structural damages.

Mr Edward Byaruhanga, the chairman of the irrigation project, said: “The dam was contracted to unprofessional engineers, who constructed it poorly with less funds, which resulted in poor channel flow designs causing cracks.”
On the fees levied on the farmers to access water, he said the irrigation committee resolved to charge new members who had not paid or never offered labour during the construction of the dam.
However, he said the charges were later dropped due to the sorry state of the dam.

Mr Byaruhanga appealed to the Belgian Technical Cooperation in partnership with Kasese District Local Government to re-design a new programme on how best the irrigation can be renovated.
Mr Julius Rukara, the Kasese District agriculture officer, said he is not aware of the collapse of the irrigation system since the stake holders have not yet reported the matter.