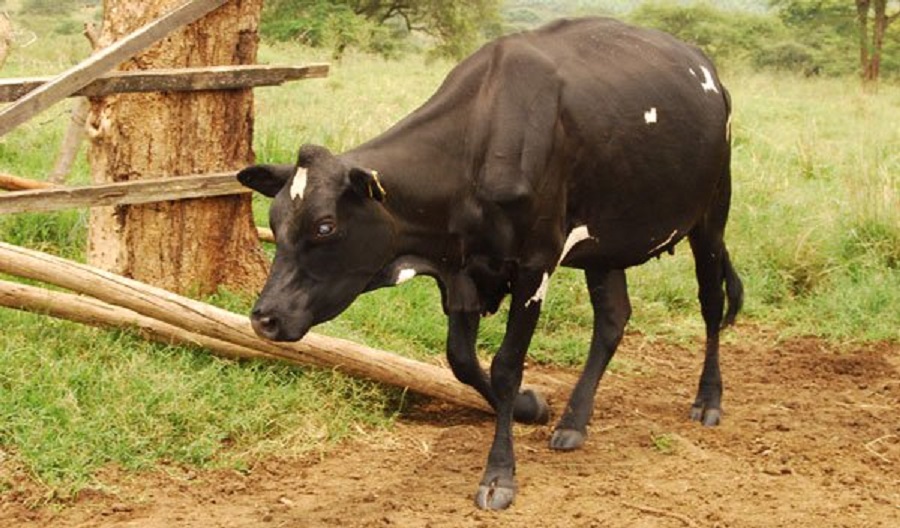 Efforts. One of the blind cows at a farm in Isingiro District. PHOTO BY FELIX AINEBYOONA

Government is investigating reports that dairy farmers in Isingiro District are using unlicensed acaricides and concoctions that are causing blindness and other complications to livestock.
The district veterinary officer, Dr Bruhan Kasozi, told Daily Monitor yesterday that they are working with the National Drug Authority (NDA) to ascertain whether the blindness of more than 300 cows is being caused by the said acaricides and chemicals. “We are still investigating together with NDA to find out if it is true that these animals are getting blind because of acaricides that are not licensed,” Dr Kasozi said.
The call for investigations was prompted by the Isingiro District chairperson, Mr Jeremiah Kamurari, who appealed to the ministry of Agriculture to come to the aid of dairy farmers in the area.
He was speaking at a meeting of dairy farmers and veterinary drug shop operators in Kabingo Town Council last Thursday.
Mr Kamurari said a report from the district veterinary department shows there are more than 300 cases of cow blindness and 14 deaths.
“Fake acaricides are being supplied through normal channels where farmers have been getting drugs; our cows are experiencing unbelievable challenge of blindness,” he said.
He added that the acaricides are concoctions of different pesticides and other things such as tobacco which have adverse effects on the animals.

Appeal
“We are wondering what the NDA (National Drug Authority) is doing. They are sensitising the public which is good but let them do enforcement. Let us have arrests of these fraudsters, name and shame and follow up cases to the letter. This will cure the problem,” Mr Kamurari said.
The principal regulatory officer at NDA, Mr Vincent Kayizi Magembe, said most of the fumigants are dangerous chemicals which are meant for hard surfaces not the skin and they can cause cancer to humans if exposed to skin.
“Farmers are continuously using fumigants which are extremely dangerous because they are meant for hard surfaces and fumigation of insects such as cockroaches, rice and bed bags. So they can even cause cancer to humans and it is even indicated on the bottles,” Dr Kayizi said.

Farmers’ last resort
The chairperson of Kakamba Dairy Cooperative Society, Mr Benon Rugaju Mutakirwa, said some farmers resorted to using different forms of acaricides and fumigants due to tick resistance.
“Since we started using fumigants such as lava, 2 In 1 Ocelamectin and others, our cows started getting blind. A top layer of the cow’s eyes is covered by something like a cloud,” Mr Mutakirwa said.
The head of veterinary at NDA, Dr Jeanne Muhindo, faulted the “big people’’ for not supervising workers at their farms, leading to the use of the acaricides.
“Most of the affected farms are of big people who are usually absentees on their farms. We interacted with their managers and they revealed that they have sometimes been forced to use these chemicals because they are expected to have zero ticks on the farms. So they stealthily do it, their bosses don’t know about it,” she said.

BACKGROUND
Last month, NDA and police arrested seven people on allegations of falsifying and selling unregistered Tick Burn Spray to dairy farmers in western region. They were allegedly buying DD Force, Boom Super, and 2 –in-1 Ocelamectin, which are fumigants/pesticides, and labelling them ‘tick burn spray’ and selling to livestock farmers.