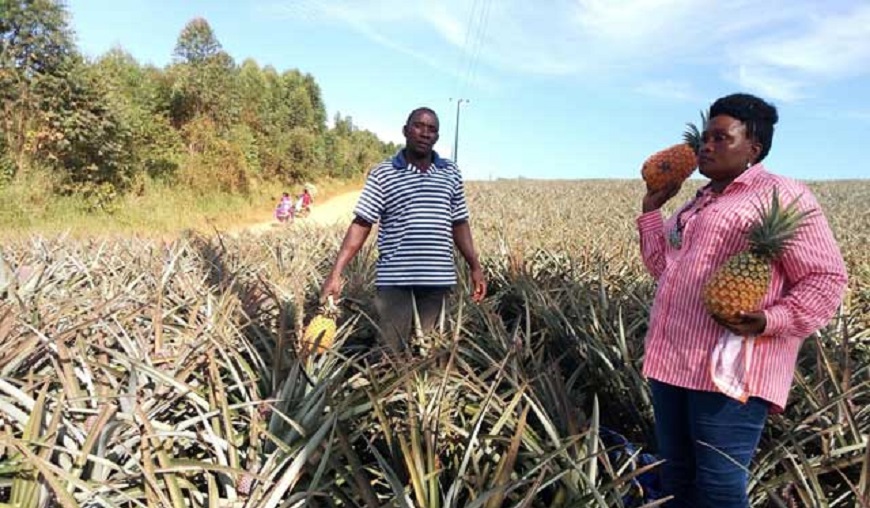 Masaka, Uganda | Pineapple farmers in Masaka district are stuck with their farm produces as their export market shrinks.

The most affected are farmers in the sub-counties of Kyannamukaaka, Kyesiiga and Buwunga who are struggling to find market for their ripe pineapples with some already rotting in the plantations.

Fred Kinalwa, who cultivated 17 acres of pineapples at Kitiiti village in Kyannamukaaka Sub County, says they are in a bumper harvest this season, but to their disappointment, they are failing to get market for the produce hence incurring heavy losses.

He explains that at least 1,000 pineapple farmers in the area have always targeted export market mainly in the neighbouring countries of Kenya and Democratic Republic of Congo and South Sudan but to their dismay, the usual traders are now staying away.

Kinalwa says that the price of pineapples has drastically dropped to as a low as 200 shillings from an average of 1,000 shillings.

Theresa Najjuma, Zzimwe parish councillor in Kyannamukaaka sub-county and a farmer explains that they have lately lost their export markets to new pineapple farmers based in areas of Zziribwe and Kikyuusa in Luwero district, and Kanguluimira in Kayunga district.

Najjuma says that they are currently producing for local markets in the neighbouring towns, which can only consume too little compared to the supply capacity.

Moses Ssebugwawo, another pineapple farmer at Nkuuna village in Kyesiiga sub-county has cried out to government to respond to their demands of having processing plant in the area to save them of huge losses suffered due to lack of market.

He warns that government’s efforts of giving farmers inputs may fail to realize the intended results of promoting commercial agriculture in the area if farmers are not supported with processing facilities that can add value to their agricultural produce to attract more earnings.

Maria Nakakande, the Masaka district female councillor for Kyesiiga and Kyannamukaaka sub-counties and one of President Museveni’s Wealth Creation Coordinators in the area has also attested to the situation, however indicating that they are still waiting for the President’s pledge of giving the area a processing plant.