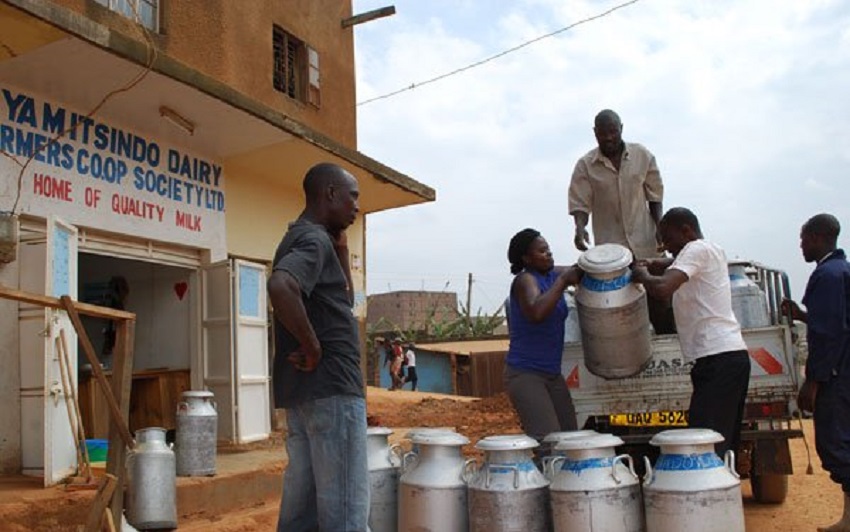 Majority of the cattle keepers in Ankole and some parts of central Uganda have over the last three decades been investing heavily in dairy farming.
This involves clearing land of thicket and removing plant species that cows do not feed on in order to allow the right pastures flourish.
The farmers in this endeavour have to dig valley dams to ensure cows drink adequately. Farmers also have to acquire, breed and nurture cows of high milk yield. The cows have to be sprayed against ticks and other external parasites at least once a week to guard against diseases such as east coast fever and babesiosis.
They have to be dewormed and injected at least every three months to check internal parasites and diseases. These are basic practices that farmers producing high quality and large volumes of milk have to do.
The revolution in dairy farming has resulted in high production of milk against the low domestic and fragile foreign markets.
Mr Ephraim Rwehooda, a farmer in Sanga Town Council, Kiruhura District, is one of the cattle keepers that abandoned traditional long horned cattle for exotic breeds. He milks 300 litres for sale every day.
“I cannot keep on my farm a cow that produces less than 10 litres,” says Mr Rwehooda.
Kiruhura alone produces 1.2 million litres of milk every day, which is about 60 per cent of milk produced in the entire country, according to the LC5 chairperson and farmer, Rev Samuel Mugisha Katungunda.
During peak production (normally the wet season), the price of a litre of milk at the farm goes down to Shs300. Mr Katugunda says the cost of producing a litre of milk is about Shs600. “Shs300 a litre is nothing to a farmer. The minimum price should be Shs1,000; we are putting in quite a lot, about Shs600 is invested in producing one litre. Farmers are frustrated, some have started rearing cows for beef,” says Mr Katugunda.
The Kiruhura Farmers Sustainable Development Union chairperson, Mr Emmanuel Kyeishe Mwesiga, says milk from Kiruhura accounts for 45 per cent of Uganda’s milk exports but the farmer are not happy with the pay. He says the cost of producing a litre of milk is at least Shs500 and argues that it does not make economic sense when the price is below this amount. Farmers sell milk through their primary cooperative societies, some sell through middlemen, who sometimes collect milk from the farm and a few others sell directly to the processors.

Business dynamics
Ultimately, all the milk ends up in the hands of processors. The processors buying in Kiruhura, Mbarara and Isingiro are from Brookside Dairy Ltd, Pearl Dairy Farms Ltd, Jesa Farm Dairy Ltd, Amos Dairies Uganda Ltd, GBK Dairy Products Ltd, and Lakeside Dairies Ltd.
They make UHT milk, yoghurt, Casein, ghee and Lato Milk, among other products, which they sell in the local and international markets.
“Farmers are not involved in determining price, it is the processors that decide; we think they set the price jointly, we (farmers) take what they determine for us. We have decided to form this union to bring together farmers and be able to address the issue of price and market,” says Mr Kyeishe.
The manager of milk procurement at Lakeside Dairies Ltd in Ruti Mbarara, Dr Ronald Bamundaga, says all the processors in the area are buying a litre at Shs600 at the plant. He says a farmer is given less than Shs600 (currently Shs300) because middle men and other players incur costs of chilling the milk and transport before it reaches the processor.
“There is a boda boda man who picks milk from the farm to the collection centre, that one will deduct something, there is truck that will transport milk from the collection centre and take it to a cooler, that will also deduct something. A lot of money is lost along the chain,” says Dr Bamundaga.
He says currently Lakeside, which has intake capacity is 150,000 litres every day, is operating at 30-40 percent (45,000 to 60,000 litres) because Kenya, which has been their major export market, banned milk imports from Uganda.
Amos Dairies Uganda Ltd in Kiruhura, reportedly did not receive milk on Wednesday because of breakdown of the factory machines.

Ban on exportation
Kenya government banned milk products from Uganda (by Pearl Dairy Farms Ltd and Lakeside Dairies Limited) in December last year claiming they are sold cheaply and have flooded their market.
“As we talk now, all processors including us (Lakeside) are not operating fully or have shutdown operations because of closure of lack of market. Over 70 per cent of what we process is exported; we sell to South Sudan as well but the market is very small,” says Dr Bamundaga.
He says the tax in Tanzania, at TZS2,000 per litre, is very prohibitive and that Rwanda is already producing and processing enough much milk. He says they are exploring DR Congo market.
“The local market is very poor, consumption of milk is very low, domestic market takes only 12 per cent of what we collect, here (in Uganda) there is no culture of consuming milk,” says Dr Bamundaga.
Mr Frank Twine, a middleman in Kiruhura Town Council, on Wednesday said they were stuck with milk. “All coolers around are full, those transporting to factories have not come for two days now, we have stopped collecting milk from farmers,” Mr Twine said.
Efforts to get comment from Pearl Dairy Farms Ltd were futile. The company general manager, Mr Bijoy Varghese, did not answer our calls or reply our text message. However, no serious activity was taking place at the company.
Mr Eric Rutahigwa, a farmer in Mbarara producing about 1,600 litres a day, has called on government to intervene. “The government should come in and ensure farmers get a fair price for milk,” says Mr Rutahigwa.
Speaking at Nshwere Church of Uganda in Nyabushozi Kiruhura district on Christmas last year, President Museveni said low price of milk had been brought down by surplus production. He said Kenya which had been market for Uganda’s milk is equally producing a lot of milk because they received a lot of rain though it (Kenya) had always been a dry area.
Mr Museveni, however, advised farmers to remain optimistic saying the prices will become normal.

Remedy
During the NRM/NRA 34th victory celebrations in Ibanda Municipality on January 26, Mr Museveni said three approaches of; market integration in Africa, promoting internal consumption and ensuring production of quality products, would be used to address the issue of lack of market for milk, maize, sugar, and cement.

Four dairy products you can make at home