IN December 17, 2018 BY witnessradio.org 916 views Leave a comment
land, livelihood and investment Livelihood 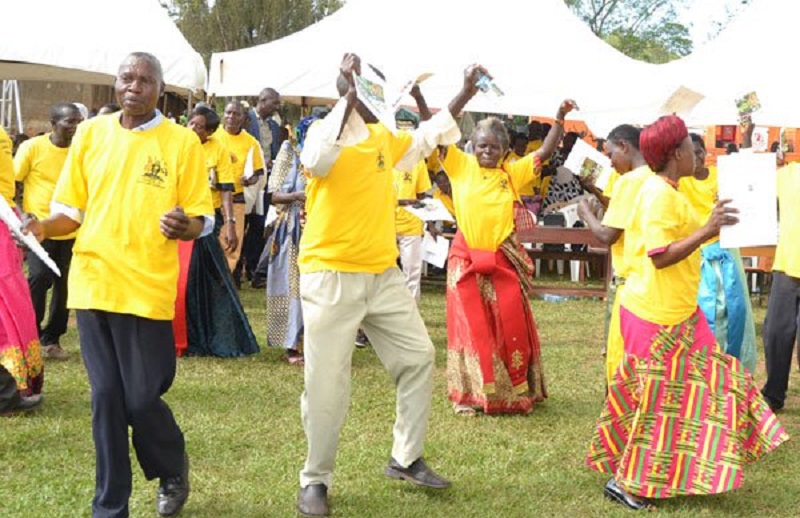 Joy. A section of the beneficiaries of the 300 mailo land titles dance after receiving their respective titles at Kirema Primary School in Nakaseke District on Saturday.

NAKASEKE. President Museveni has handed more than 300 mailo land titles to 300 bibanja holders from the villages of Kirema, Kabubu and Kitoto in Semuto Sub-county in Nakaseke District.
At the handover of the tittles, the President said the intervention offers partial solution to the longstanding land challenges affecting many Ugandans.
The mailo land titles were processed by the Ministry of Lands under the land fund programme for the 600 acre land secured from Namunkekera Industries by the Uganda Land Commission to have all the bibanja holders registered although the available resource allocation can only allow a phased implementation of the project.
“The stubborn and reckless landlords have continued to undermine the land act guidelines leading to the many land related problems in the country. It is not that we cannot handle the unruly landlords but we have devised means of settling some of our people using the land fund. I discovered that many of my former bush war fighters in this area ‘Semuto’ had been made landless by landlords.

The available funds are not enough to roll out the land fund to all affected areas but this is a good start for our people,” Mr Museveni said on Saturday.
The President said the rushed court orders to have bibanja holders evicted emanate from the many tricks the landlords use. He warned that they already talked to the Chief Justice regarding the court orders. Mr Museveni said he encourages all the bibanja holders to form associations and fight back the stubborn and reckless landlords.
“To the RDCs, police commanders and local government authorities, the evictions are not allowed. You will lose your respective jobs when I get to know about any unlawful eviction of people from their respective bibanja,” Mr Museveni directed.
Lands minister Betty Amongi earlier told the President that the land restlessness in many parts of the country was a big challenge and her ministry has visited many of the affected areas where courts of law have made decisions without visiting the locals to establish and asses the conditions.

Falsehood
“The Courts sometimes rely on false information from the landlords to issue the court orders without visiting the locals. We also have a big problem where the landlords are forcing the bibanja holders to share the land and end up taking away the biggest part of the land. Some landlords decide to hideaway from tenants to dodge the Busulu fee which is supposed to be paid by the tenants,” Ms Amongi told the President.
“Government under the Ministry of Land has now fixed the Busulu where rural areas including district local governments are under instruction not to exceed Shs5000 for Busulu while the urban areas at the level of Municipalities must not charge above Shs30, 000. The city areas must not charge above Shs50, 000,” Ms Amongi added.
This is the first time that government is issuing out the private mailo land titles to a large number of residents. About 20,000 land titles should have been processed by now but the process has been slowed down by the ongoing land inquiry commission where many of the files are still being held pending investigations.
“The Ministry of Finance released Shs13b under the land fund programme to have the titles processed but we are currently stuck with the large number of cases still under investigations by the land inquiry commission,” State Minister for Lands Persis Namuganza told Daily Monitor in an interview.
Ms Edissa Nakazi (71), a resident of Kabubu Village in Semuto Sub-county, said owning a land title at her age was a life dream which finally came to fulfillment on Saturday.