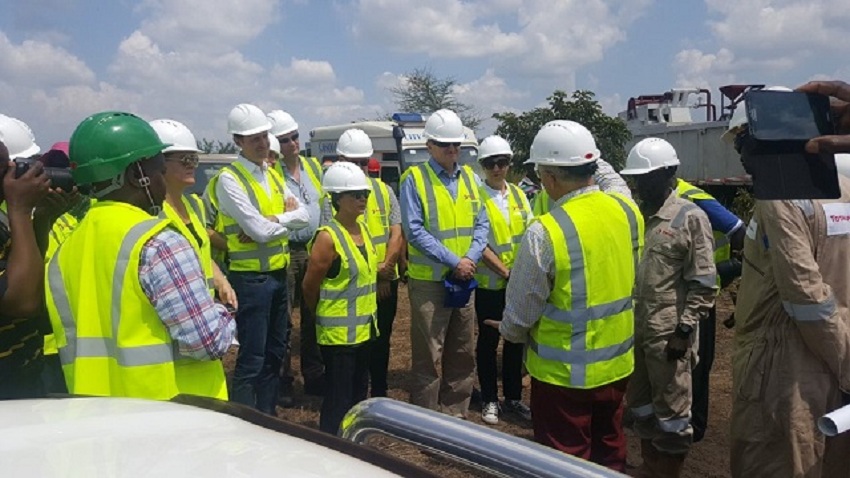 Kampala, Uganda | The Ugandan government has been applauded for the pace at which it is undertaking projects in the Oil and Gas Sector. The Nod came during a tour of key projects in the Albertine Graben by a team of Ambassadors from the European Union currently in Hoima to assess developments on oil, the environment and sustainability.

This morning, the ambassadors visited Nkenda-Hoima transmission line and substation, an infrastructure which was put together with funding from Norway, France and the government of Uganda.

As part of the retreat, the ambassadors also visited the EU funded Forestry Saw log project at Kikonda in Kyankwanzi district and held discussions with the local government leaders and civil society organizations working in the areas of oil governance, the environment and sustainable development.

Dr Albrecht Conze, the Germany Ambassador to Uganda says Uganda has made impressive and tremendous progress in the oil sector. He adds that the construction of oil roads, the refinery and Hoima International Airport gives Uganda an upper hand in the oil production process.

Dr Conze says that although the Final Investment Decision of the consortium for the pipeline has been pushed to the first half of 2019, the local leaders are still expecting the government to hit the deadline.

He says they have further realized that Uganda took great progress in the Compensation process despite some hindrances adding that the government of Uganda played a big role in ensuring that the people are well compensated for the loss of land to pave way for the construction of the oil refinery in Kabaale.

He, however, says that the government should immediately define the immediate benefit of the oil and gas sector to the communities, adding that many people have high expectations on the likely benefits to individuals.

Hoima District Chairperson Kadir Kirungi says that the district leaders have been able to equip the local population with knowledge and skills on how to tap opportunities from the oil discovery.

Bashir Tumwesigye, the Executive Director of Civic Response on Environment and Development, however, says some Ugandans have started losing the hope of starting oil production by 2020 due to delays in the construction of the Oil refinery and the pipeline.