Kampala, Uganda | A World Bank country report on agriculture in Uganda has concluded that greater focus on the Northern and Eastern Regions will be needed for Uganda to end extreme poverty and boost shared prosperity. This is important, the report adds, to reduce the social and political tensions that can emerge from stark differences in economic development across regions.

The “Uganda – Agriculture Sector Public Expenditure Review” report that was launched at Protea Hotel in Kampala on Tuesday, aims to guide policymakers on where and how best to invest in Uganda’s agriculture sector.  The report that also analyzes the efficiency and effectiveness of public expenditures was produced at the behest of partners –  Ministry of Finance, Planning and Economic Development (MoFPED) and Ministry of Agriculture, Animal Industries and Fisheries (MAAIF).

This is Uganda’s second agriculture public expenditure review (AgPER) since 2010. By producing it, the government and the World Bank bring to the fore the best policies to achieve Uganda’s Vision 2040 and the transition to middle-income status.

The report hailed government for realizing agriculture’s potential, but warned that it has to improve the quality and effectiveness of public expenditure in the sector to succeed.

“Efficient and effective spending on agriculture would help the sector to achieve its potential to contribute to inclusive growth, create employment for the country’s rapidly growing and predominantly young population, and ultimately to reduce poverty,” the report stated.

It states that “this new AgPER report aims to identify how public spending can best support agriculture to deliver growth through increased productivity, stronger resilience to climate change and other production risks, and more effective private sector engagement in the provision of public goods in the sector.” 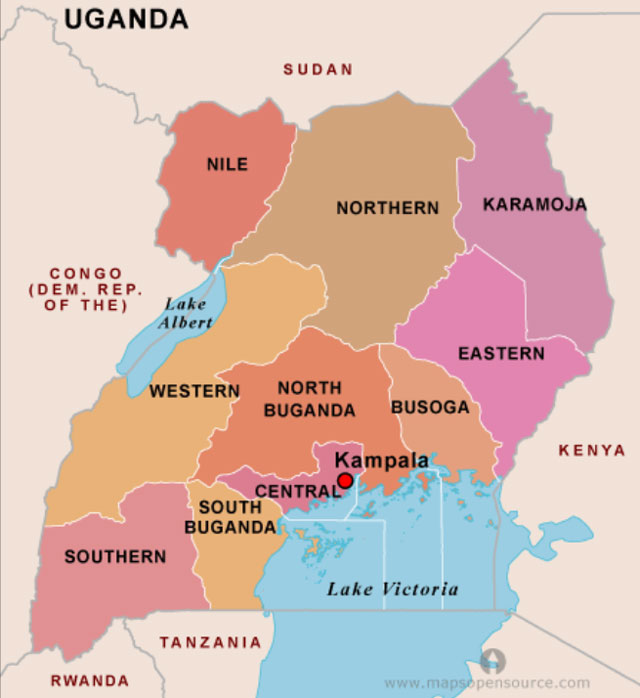 The report hails the Agriculture Sector Strategic Plan for a policy that ensures the Northern and Eastern Regions receive specific policy attention because of their higher poverty rates and potential for instability. The report calls for even more support for the region as there is a decline in.

“More than three-quarters of people aged 15–24 engage in agriculture as their first job, mostly in primary production. An analysis of six Sub-Saharan countries shows that transforming their food systems from a focus on primary production to market-oriented agri-food value chains could create more jobs between 2010 and 2025 than the rest of the economy.” 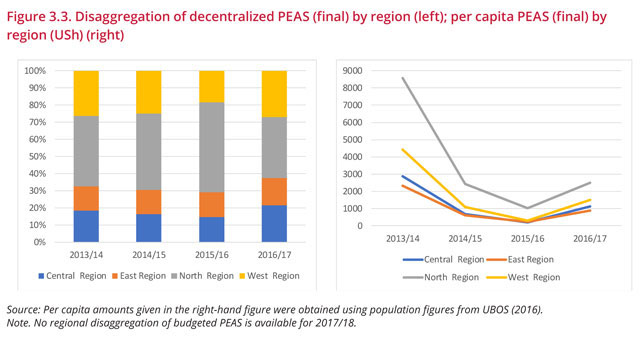 According to the Ugandan poverty assessment report (2016), regional variations in poverty are large and increasing, with most of the poor concentrated in the north and east – almost three in four residents (74 percent) live below the national poverty line.

“Uganda’s agrifood system can play a significant role in enhancing employment opportunities for the
the country’s predominantly young and rural population,” the AgPER report says.

According to the  AgPER report, “the agriculture sector is particularly important for young Ugandans, who are the majority of the population: 80 percent of Ugandans are below the age of 35 and, with a median age of 16 years, Uganda has the youngest population of any country in the world.”

World Bank’s new scheme to privatize land in the developing world exposed
Related Topics:Agriculture in Ugandafarmfarming
Up Next

Mr Emmanuel Kyeishe, a resident of Rushere in Kiruhura District and dairy farmer with more than 100 head of cattle, says dairy farmers in the cattle corridor have battled the problem of tick resistance for a long time.
“The issue of ticks has been rampant in the cattle corridor to the extent of losing our cows. We spend a lot on treating them because of ticks since they infect animals with several diseases,”  he said.

Mr Kyeishe said he loses at least two cows every month to tick-borne diseases like East Coast Fever and heart water.
“I have lost 180 cows in the last five years due to ticks and tick-borne diseases. If they do not die, they get blind and some lose their skin. But if we get a vaccine, it will have saved us a lot,” he said.
Mr Kyeishe added that he has resorted to mixing agrochemicals with acaricides since the available ones on the market are failing.

Mr Jackson Bells Katongole, a dairy farmer in Kashari, Mbarara District, said if the government’s move to have anti-tick vaccine is successful, quality of dairy products would improve.
“A farmer loses at least two to five cows every month and we have resorted to using different concoctions from Tanzania, Rwanda and Kenya because the problem of ticks has made us helpless,” he said.
He added: “We had reached the point of mixing pesticides with acaricides because of tick resistance and in the process our cows have gone blind, lost skin and others died.”

Mr Katongole further said each cow that dies is valued at around Shs2.5 million, which means that a farmer loses Shs5 million every month.
The Mbarara City Veterinary Officer, Dr Andrew Akashaba, said in Mbarara alone, there are about 60,000 head of cattle, mostly exotic breeds which are prone to ticks.
“Most of the exotic breeds of cattle are at a high risk of acquiring ticks and tick borne diseases, which are a major hindrance to livestock development in the cattle corridor,” he said.
Mr Akashaba added that between 2,000 and 3,000 cows die annually in Mbarara alone due to tick-related diseases.

While launching the final clinical trial of anti-tick vaccine manufactured by National Agriculture Research Organisation at Mbarara Zardi on Thursday, the deputy director general and research coordinator, Dr Yona Baguma, assured the farmers that once the vaccine is approved, they will be spraying their cattle against ticks twice in six months as opposed to twice a week.

Naro researchers set to roll out tick vaccine for livestock

Minister explains cause of blindness among cows in Isingiro

About 3,640 model farmers in Nebbi District, who were registered under the Agricultural Cluster Development Programme (ACDP) to access agricultural inputs on E-voucher, are stuck after failure of the system.

The farmers say the system has affected their planting patterns.

One of the group members of Adiya-Rach Agricultural Development Association from Atego Sub County in Paminya Upper Parish in Nyayamo Village, Ms Akech Anzila, said she paid for tarpaulins and other farm tools through the e-voucher system but she has never received the items.

Akech said when they were sensitised on the programme, they were promised timely delivery.

“We shall take the Ministry of Agriculture to court for the failed programme of the e-voucher system,” she said.

Another coffee farmer in Erussi Sub County, Mr Genaro Unenchan, said the electronic voucher system has not been effective due to network interruptions.

“We were trained by the Ministry of Agriculture and Animal Husbandry on how to access services on the e-voucher system but the system left farmers disappointed and now farmers are demanding that the service providers pay back their money,” Mr Unenchan said.

The manager of Yesu-dit Cooperative, Mr Louis Onencan, said of 776 cassava farmers who applied and paid for the cassava cuttings through the electronic voucher system, only four farmers succeeded.

“The factory will be underfed due to the poor e-voucher system which affected our planting season.

There was poor electronic services rendered to farmers by the services provided sub-contracted by the ministry of Agriculture,” Mr Onencan said.

Response
Responding to the anomalies, the Agricultural Cluster Development Programme Focal Point person in Nebbi, Ms Joyce Piwa, said of 3,640 registered farmers in the district, 906 farmers who paid for the services failed.

She said the Ministry of Agriculture had contracted the United Bank of Africa to bring services nearer to farmers but the system failed.

Ms Piwa said the ministry has now tasked United Bank of Africa to refund the farmers’ money.
She said farmers were registered and paid for services such as tractor hiring, cassava cuttings, coffee pulpier, tarpaulins and farm complements.

Farmers should stop getting banana plantlets from districts in Western and North-West Uganda to stop the spread of the Banana Bunchy Top Virus (BBTV) disease, Hebert Musiimenta, the Principal Agricultural Inspector in the Ministry of Agriculture Animal Industry and Fisheries-MAAIF has advised.

The Banana Bunchy Top Virus was first observed in the western Uganda districts in late 2020. In July this year, the ministry raised a red flag when the disease caused havoc on banana plantations in West Nile, Rwenzori and Tooro regions.

An infected plant presents with severe stunting, narrow leaves, chlorotic leaf margins, and dark green streaks on petioles and midribs. The affected plant also shows a rosette-like or bunchy and choked appearance. Diseased plants rarely produce fruit and when they do, the fruit is stunted and twisted.

The disease is spread by aphids and the planting of affected tubers.

The disease has the capacity to wipe out banana gardens within 3 to 5 years unless farmers practice the control measures such as the proper destruction of affected stems, control of aphids, and planting clean materials.

Hebert Musiimenta, Principal Agricultural Inspector in the Ministry of Agriculture Animal Industry and Fisheries (MAAIF), says to contain the spread of the disease, farmers should stop getting banana planting materials from Nebbi, Zombo, Arua, Maracha, and Koboko districts in North-West Uganda and Bunyangabu, Kasese, Kabarore, and Bundibugyo districts in Western Uganda.

He also advises the farmers to be cautious about planting materials from Kisoro, Kabale, Ntungamo, and Isingiro districts since they are near the border.  The disease is suspected to have spread to Uganda from the neighboring Democratic Republic of Congo (DRC) and Rwanda. Musiimenta advised farmers in an interview with URN that if they are to pick planting materials, they should first consult agriculture officers in their areas to recommend safe planting materials.

Musimenta revealed that a team of officials from the Ministry of Agriculture, Animal Industries, and Fisheries is investigating the prevalence of the virus in Kigezi region specifically districts neighboring Rwanda and DR Congo.

He says the disease has the capacity to wipe out banana gardens within 3 to 5 years unless farmers practice the control measures such as the proper destruction of affected stems, control of aphids, and planting clean materials.

Original Source: URN via The independent