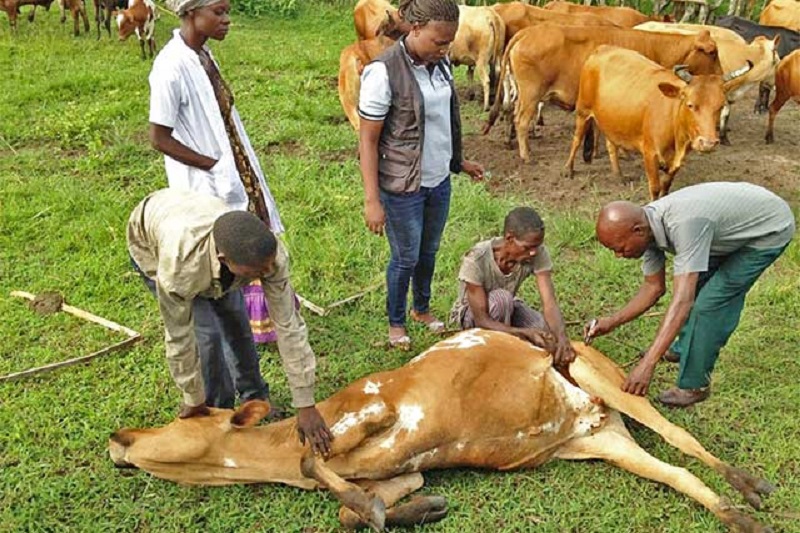 A section of livestock farmers in Rakai, Lyantonde, Sembabule, Kyotera and Kiruhura districts have accused government of selectively carrying out mass vaccination of cattle against the foot-and-mouth disease (FMD).

They claim the exercise, which kicked off in March, is being done in a few parishes.
In February, Cabinet approved a supplementary budget of Shs14.6b to procure FMD vaccines for all livestock across the country.

However, Mr Matthias Lubowa, a livestock farmer in Ntuusi Sub-county, Sembabule District, said only a few areas in the area have been considered.

“Vaccination was carried out in Mitima Parish. We wonder whether that was mass vaccination as promised by government,” Mr Lubowa told Daily Monitor on Wednesday.

Mr Robert Kanyete, the chairperson Nyekundire Farmers’ Association in Kyalulangira Sub-county Rakai District, said the exercise had not yet started in the area yet their cattle is prone to the viral disease during the rainy season.

“We appeal to government to fulfil their promise before we suffer an outbreak. Our prayer is to have our animals vaccinated as soon as possible,” he said.

The disease, which affects cows, goats and sheep, is spread through cow dung, milk, meat and air.
Mr Kanyete said farmers are also concerned about the vaccination fee yet the exercise is supposed to be free.

“Whenever they conduct vaccination in our district, they charge Shs1,000 per cow yet the exercise is fully paid for by government,” he said.

Mr Theodore Ssekikubo, the Lwemiyaga County MP, said many farmers were still waiting for the vaccine.
“Our district has been under quarantine since August last year. In the past two months, they have carried out vaccination in only one sub-county,” he said.
The MP was arrested in January for allegedly defying a livestock quarantine.

Lack of resources
However, Dr Angelo Ssali, the district veterinary officer, said they only received a consignment of vaccines for one affected parish.

“We cannot roll out mass vaccination in the district because we do not have the resources to do so, we received only 15,000 FMD vaccine doses for only one parish,” he said.

Dr Godfrey Kimbugwe, his Kyotera counterpart, said they received 15,000 vaccine doses against 200,000 head of cattle in the district.

“The doses we received cannot even cover 25 per cent of the livestock we have. We have decided to carry out strategic vaccination only in villages near the Uganda–Tanzania border,” Dr Kimbugwe said.

The situation is not any different in Lyantonde and Kiruhura districts.
Dr Ronald Bameka, the Lyantonde District veterinary officer, said the doses they received cover less than 5 per cent of the livestock population.

“Lyantonde has individual farmers with large herds of cattle and the vaccine doses received were very few. The ministry [of Agriculture] should consider sending more,” he said.

His Kiruhura counterpart, Dr Grace Asiimwe, advised the ministry to consider the population of livestock in a district before dispatching vaccines because some have overwhelming number of animals.

“We are receiving criticism from farmers questioning the criteria used in carrying out ring vaccination, saying FMD affects all of them,” he said.

Dr Kaddu Nsubuga, the Gomba District veterinary officer, said they received only 15,000 doses yet they have 130,000 head of cattle.

Mr Bright Rwamirama, the State Minister for Animal Industry, admitted the problem, saying although they needed 3.5 million vaccine doses only 2 million will be procured.

“Uganda has 15 million head of cattle and the procured vaccines are not enough, but we prioritised hotspots and these included parts of central, south-west and north east regions,” he said.

He said some 500,000 out of the procured 2,000,350 FMD vaccine doses are expected to arrive in the country before end of this month. Mr Rwamirama said when the exercise is completed, the quarantine will be lifted in Sembabule, Kiruhura, Gomba, Nakasongola and Nakaseke districts.