LivelihoodCourt orders are too weak to stop land evictions in Mubende?

IN January 30, 2018 BY witnessradio.org 1647 views Leave a comment
Livelihood 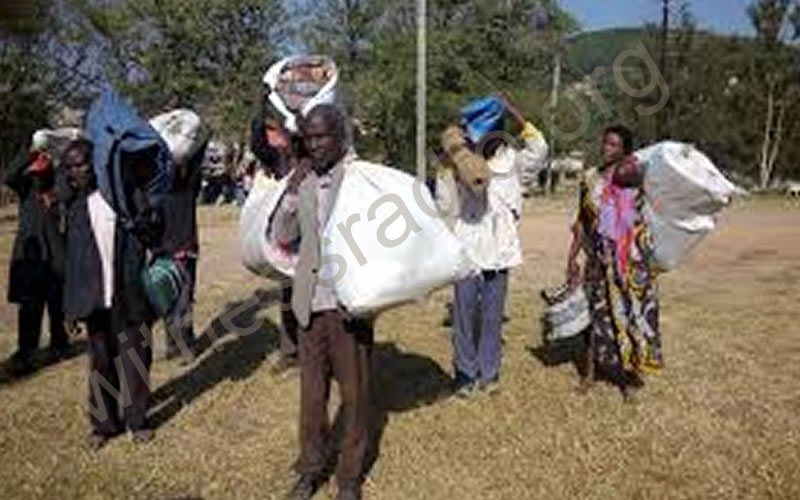 By witnessradio.org Team
Respect for rule of law is at stake in Mubende as court orders are not powerful enough to stop land evictions, witnessradio.org can reveal. Mubende is one of the districts in Uganda experiencing high rate of land eviction of land by local businessmen and international companies.

Witnessradio.org has documented several cases where hundred of families have been violently evicted off their land with active court orders. These include, Abid Allam who evicted people from over 18 square miles, Naava Milly Namutebi with support from Uganda People Defense Forces (UPDF) evicted people off 3.6 square miles and one Kananura, evicted families off 4 square miles at Kanyogoga village, Kanyogoga parish, Butoloogo sub county Mubende district.

Kibaaba Rwatangabo, 56, a victim of land eviction at Kayebe village said, court orders issued in favor of local communities are very weak to change the status quo. “We have been at Mubende district police several times with our court orders but police officers are not interested and their actions have had serious effects to our livelihood and survival among other direct and indirect effects…” said Kibaaba

The latest is a case of 200 families being evicted off two villages in Kayebe parish, Kitenga sub county in Mubende district despite having a court order. Two local business people namely; Mercy Ddungu and David Mugyenyi are accused of masterminding the  illegal eviction. The communities say they have lived on this land formerly a public land since 1980s.

Documents seen by witnessradio.org indicate that Mubende district land board issued land titles to Mugyenyi on August 15th 2016 and the land was registered on Block 373, plot 169 and Bock 373, plot 171. The same process that issued a freehold land title to business people is being protested by local communities saying, they have lived on this former public land since early 1970s and have never been consulted as bonafide occupants.

On February 02nd, 2017, communities led by Mushuhukye Vicent, Asaba Kakuhirire and others went to court challenging what they called physical attacks being subjected to them by Ddungu and Mugyenyi. The attacks included cutting down of their food plantations, demolition of people’s houses and illegal arrest and detention by police in Mubende.

On October, 20th, 2017, Grade One Magistrate Naigaga Winfred Kyobiika issued an injunction restraining Mercy Ddungu and David Mugyenyi and their agents from further destruction of properties, trespassing and carrying out any activity on the land under contest until the main suit is heard and disposed off.

Its however to the contrary, Mercy Ddungu and Mugyenyi disrespected court orders and continued to hire casual laborers to cut down people’s food plantations and attacking residents under the watchful eye of Mubende police.

Ddungu, told witnessradio.org that, there’s no forced eviction on her land. “when I first bought that land from the former owner, I never knew that there was a case in court until I met the claimants in court. While in court, we were asked to try out of court settlement and I have since reached an agreement with over 60% of occupants to get off my land” claims Ddungu.