NGO workUgandan NGOs to Government: We shall not succumb to your intimidation…! 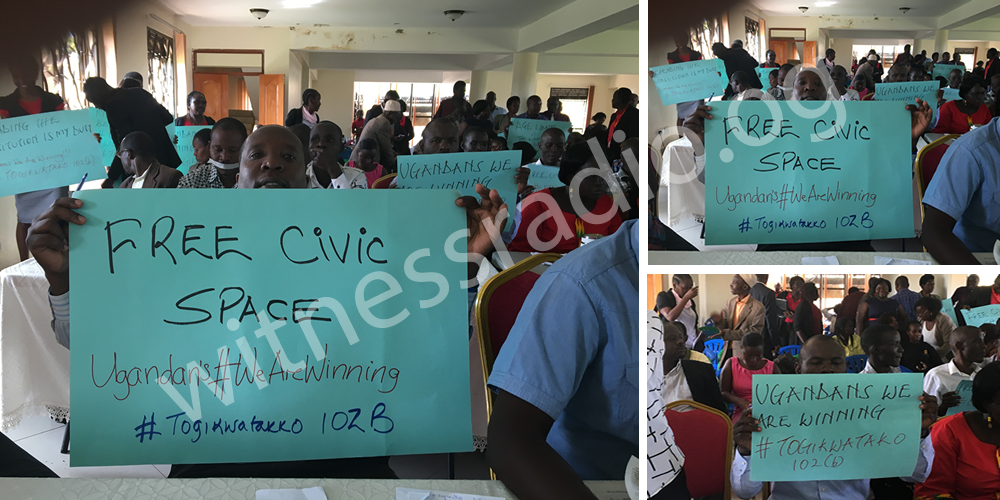 As Uganda’s public institutions continue to face credibility and independence challenges, the ongoing rift between government and civil society organizations is not about to end. The organizations have vowed not to be spectators as government drags the country into anarchy by altering with the constitution.

Human Rights Watch (HRW) is one of several organizations that have accused Uganda’s public institutions of facing credibility and independence challenges due to corruption and political interferences among others. https://www.hrw.org/report/2013/10/21/letting-big-fish-swim/failures-prosecute-high-level-corruption-uganda

The stand off between government and NGOs followed a crackdown on the organizations, raiding some and confiscating documents, equipment as well as freezing accounts for two organizations.

Accounts of Action Aid Uganda were frozen and all personal accounts of employees with Great Lakes Institute for Strategic Studies disabled.

Speaking during a joint meeting in Ntinda, the organizations said that this was a scare tool to have them shut up but vowed never to relent.

Irene Ovonji from FIDA says now is the time for Citizens to tell off their leaders not to support the bill that will see article 102[b] of the constitution changed. “We will continue to get closer to people led organizations, the workers, doctors, this is an attack on all the citizens and the country in general”

The organizations resolved to reach out to citizens in all districts with an aim of getting their opinion on the matter. The executive director Action Aid Uganda Arthur Larok confirmed that they will start in the districts represented by MPS in support of the age limit bill. “It is not a bad idea if we started in WestNile and western Uganda where the mover of the age limit bill comes from …” Larok said attracting wild cheers from the audience.

peaking during the same meeting, Human rights lawyer, Nicholas Opio challenged NGOs on compliancy to avoid the risk of attacks. He advised leaders to clear their taxes, register with the relevant authority and also understand laws under which they operate. “Understand the nature of the legal framework under which the sector operates, you know that all NGOS are supposed to register with the financial intelligence authority, how many of you are registered, how many of you pay NSSF for your employees…such gaps expose you” He emphasized.

Meanwhile for Sarah Bireete , this is the time to challenge the NGO Act that cripples their work. She also advised members to be more vigilant, watch one another’s backs as well as use modern technology to guard against hackers.

During the same meeting the executive director Great Lakes Institute for Strategic Studies Godbar Tumushabe advised the president to retire peacefully for the a brighter future of the country. “The president is being held hostage by conmen who lie to the president that NGOs are funding the opposition which is not true… If the president retired peacefully and with dignity, he could be a major source of knowledge to Uganda, the region and Africa in general.”

This prompted a response from FIDA head Irene Ovoji who said this implied that the president is “Mr.Fix it” which is completely false. “Am sorry Godbar, I don’t agree in what you say, the president is not Mr. Fix it all but rather Mr. Spoil it”.
The Organizations will now traverse the country seeking citizens’ views on the proposed amendment of art