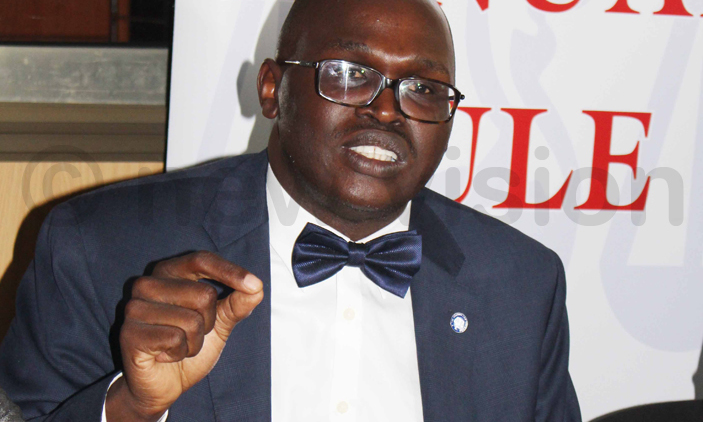 Ugandan lawyers through their umbrella body the Uganda Law Society have written to Godfrey Mutabazi, the Executive Director Uganda Communications Commission to express their concern over a directive by the latter to all telecom companies to enforce verification and validication of all Ugandans’ Sim card ownership using national Identification cards.
In a letter dated April 13, 2017, Francis Gimara, the Uganda Law Society Francis Gimara who copied his letter to the Minister of Information Communications Technology and National guidance, the Inspector General of Police and the Executive Director NIRA, categorically stated that the manner in which the directive was given is “problematic.”
The “directive to use only national ID is not supported by law,” Gimara wrote explaining that the current law that can be used is the regulations of Interception of Communications Instrument No.42 of 2011.”
However this law, according to Gimara, “under regulation 7(3) allows valid identification documents recognized and issued by government agencies such as National Identity Cards, work permits, National passports, driving licenses, student identity card and voter’s cards to be used for registration. If one form of identification is going to be preferred, then these regulations will have to first be amended.”
Secondly, “the time allocated of the exercise is very limited and it is not possible that NIRA has the capacity to ensure that all Ugandans who use mobile phones can be registered for National Identity cards in seven days [four of which are public holidays] we are of the view that the requirement to use the national ID to re-register within seven days is unreasonable.”
Whereas the Uganda Law Society acknowledges the security threats the UCC is seeking to avert, Gimara insists that the directive should “not be in violation of the existing legal framework.”
As a way forward, the law society made three recommendations;
• The seven-day period given to Ugandans to verify and update the Sim cards is short and unrealistic and should be extended t a more reasonable time to allow those without national IDs to acquire them
• The bill on (privacy and) data protection needs to be passed urgently, and UCC should ensure the existence of appropriate privacy safeguards and data protection policies because it’s critical for building consumer confidence
• Government should originate a more comprehensive law to govern Sim card registration. For instance in Kenya, there is the information and communications [Registration of subscribers of Telecommunication Services]…In Uganda, the regulation of interception of communications act, 2010 and the regulations have several gaps. These cannot be cured by adhoc interventions.
In conclusion, the law society proposes to UCC to “convene a stakeholders’ meeting to discuss these issues so that we can collectively put in place legally acceptable mechanisms that will not disenfranchise people from accessing communication.”
Uganda Law Society’s position on the exercise follows persistent protests by a section of Ugandans and communication activists particularly Unwanted Witness-Uganda, a digital rights nongovernment organization against government’s concession to allow private telecom companies access to the national ID database without the enabling legal framework.
“…we also fear that handling of data without a clear protection framework will have a direct bearing on the work of Human Rights Defenders including journalists whose work rotates around sensitive information and sources and political activists among others,” said Jeff Wokulira Ssebaggala, the Chief Executive Officer, Unwanted Witness-Uganda.