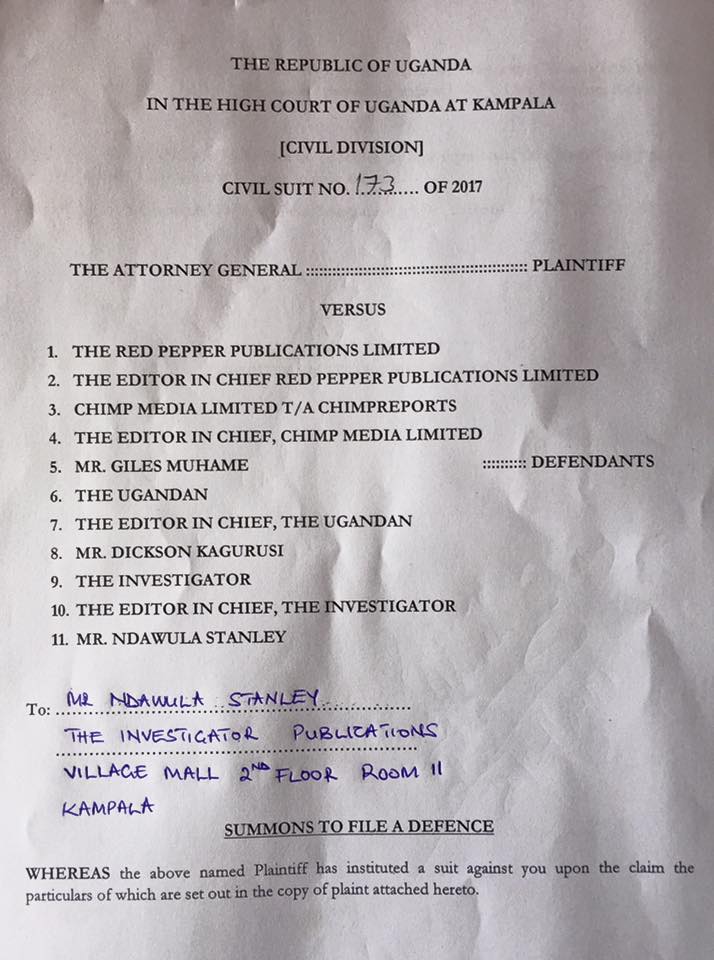 The interim order that was issued exparte also affected Red Pepper publications, but activists view this as a move to gag the free media in the country.

“I think Uganda police is stifling media freedom and such actions suggest something is being hidden away from the people of Uganda,” said Jeff Wokulira Ssebaggala, the Chief Executive Officer, Unwanted Witness-Uganda.

The stifling order followed an application by General Kale Kayihura, the Inspector General of Police (IGP) who sore an affidavit, averring that the respondents’ continued coverage of the matter would jeopardize the investigations into Kaweesi’s gruesome murder.

“The respondents’ publications about the death and investigations of the late Andrew Kaweesi case contain confidential information which will jeopardize investigations,” Kayihura stated in his affidavit that moved Joy Kabagye, the High court registrar to agree with the applicant.

“An interim order doth restraining the respondents by themselves or through their authorized agents and employees from publishing contents or running series on the investigation into the murder of AIGP Andrew Felix Kaweesi pending disposal of the main applications,” reads the court interim order signed by the aforementioned registrar.

The main application in which Stanley Ndawula, the chief editor of The Investigator, Giles Muhame, the chief Editor of ChimpReports, Dixon Karugusi, The Editor of the Ugandan, are the major respondents, would be heard on 21st, August, 2017 by Justice Steven Musota.

But Ndawula, said that will “not leave the permanent injunction alive” saying that they will soon instruct their lawyers “to fight to see that it is set aside.”

“Some of us know what it takes to investigate such high-profile cases and really these guys [police] have jeopardized the investigations [of Kaweesi murder] themselves and not us,” Ndawula told witnessradio.org in a telephone interview Friday.

He added that “I think General Kayihura has personal interests in the matter. Otherwise, we have not talked about anything to do with the merits of the investigations, but we were reporting about the general issues. We have talked about fake suspects [in Kaweesi murder] which are true stories.”

So, Ndawula suggests, Kayihura “shouldn’t have gone to court to gag the media, he should have talked to us. Otherwise, his actions paint a picture as if Uganda has failed institution which is not true.”

Giles Muhame, said acknowledged receipt of the court order, saying that “as a law-abiding entity, The ChimpReports Media Group will be represented by Isaac Ssemakadde of the Centre for Legal Aid and other lawyers in defending media freedom in courts of law.”

He explained that “Our defence will be filed next week,” but asserting that “we believe Ugandans have the right to know the truth about how this matter of national interest is being handled by relevant authorities. We thank you all for your support.”

Reporting and editing by Deo Walusimbi