IN March 13, 2020 BY witnessradio.org 633 views Leave a comment
land, livelihood and investment Livelihood 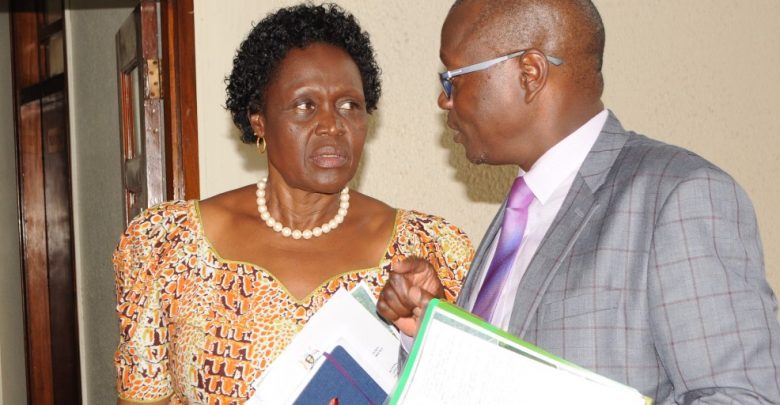 Beatrice Anywar the State Minister for Environment on left engages a technocrat after submitting.

President Yoweri Museveni has issued a directive for the entire Bugoma Forest in western Uganda to be mapped. This was revealed Wednesday by Beatrice Anywar, the State Minister for Environment. The development follows last year’s court ruling against government’s National Forest Authority (NFA), which had alleged encroachment on the forest by Bunyoro Kingdom. In May 2019, Masindi High Court Judge Wilson Musalu Musene dismissed with costs a case in which NFA accused Bunyoro King Solomon Iguru Gafabusa of encroaching on sections of the forest reserve.

The Kingdom of Bunyoro Kitara (BKK) was jointly sued with Uganda Land Commission (ULC) for illegally titling 5,779 hectares which were subsequently leased to Hoima Sugar LTD. In their ruling, judges basing on evidence submitted by Wilson Ogalo the Commissioner of Surveys and Mapping, which affirmed that the land had never been surveyed and thus was not a forest reserve. This was against arguments by NFA lawyers who insisted that the area is part of 41,444 hectares of Bugoma Central Forest Reserve (CFR). In President Museveni’s recent directive, the Ministry of Finance was ordered to allocate funds to the Water and Environment Ministry to enable the survey and opening up of boundaries of Bugoma CFR and ascertain whether Hoima Sugar LTD had encroached on the forest reserve.

Minister Anywar says if the mapping process is handled transparently, numerous land claims that have propped up concerning this area shall be amicably sorted. One of such cases is (Civil Suit No:12 of 2017) where Atugonza Francis and Kasaija Mustafa sued NFA for wrongfully including 2,471 hectares of their customary land into the Bugoma CFR. While a consent judgment was entered into by both parties on March 28 2019 to jointly re-open boundaries in five months this has not happened. Another suit involves Tumwebaze Gideon and five others versus NFA and Hoima Sugar Limited.

The plaintiffs are seeking a permanent injunction stopping the defendants from interfering with 2000 hectares which they purportedly own at Nyairengo, Kisoroza and Kyangwali in Hoima district. Anywar yesterday told the Natural Resources Committee of Parliament that this land grabbing had been amplified by inadequate man power to patrol and manage the reserve. “The forest reserve is 41,414 hectares (411 square Km) but with only 5 forest supervisors and 15 armed men (Police and UPDF) guided by 11 unarmed patrolmen; this number cannot effectively manage the pressure the reserve is facing,” she disclosed. Also among other encumbrances, Anywar cited rising demand for timber products following the rapid destruction of forests surrounding the CFR. “Time and again, people sneak in and fell trees for timber which is transported to as far as Kampala Markets,” she pointed out.