IN August 7, 2018 BY witnessradio.org 1948 views Leave a comment
Livelihood 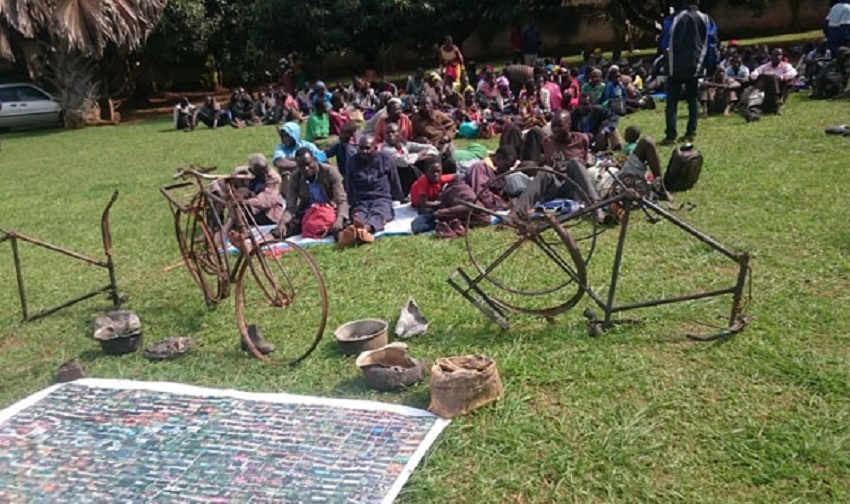 Helpless. Some of the victims of Apaa land conflict camp at the UN offices in Gulu Town last Friday.

Gulu. Hundreds of locals who have for the last one month camped at the UN premises in Gulu Municipality seeking its intervention over the ongoing evictions in Apaa Village, Itirikwa Sub-county, Adjumani District have accused UN officials of neglect.

The locals say since July 11 when they issued a letter to Prince Zeid Ra’ad al-Hussein, the UN High Commissioner for Human Rights in Uganda, no response has been given on their predicament.
At least 234 Apaa land evictees are demanding that the UN stops government from using the Uganda People’s Defence Forces (UPDF) soldiers and Uganda Wildlife Authority (UWA) to evict locals from Apaa land.

Report
Civil society organisations in northern Uganda issued a statement last week, saying a total of 844 huts have been burnt down and more than 2,700 people have since been displaced as a result of the evictions.
Ms Jospin Ayet, 53, one of the victims, says for four weeks now, they have been left unattended to by UN officials who are also demanding that they leave their premises.
“When we first came at the UN offices, the officials were nice and promised to help us. But they have now changed. They do not talk to us, they even want us to leave their compound, saying we are inconveniencing their work,” Ms Ayet says.

She adds that their living conditions have since deteriorated because they are faced with water shortage and poor sanitation.
She notes that the pit-latrine they have been using has filled up and efforts to have it emptied have been frustrated by UN officials.
“A truck was hired by good Samaritans to empty the pit-latrine but police officers guarding the UN compound refused to let them in; the officials have too refused to help us. We are worried of an outbreak of cholera and other hygiene related diseases,” she says.

The Amuru District chairperson, Mr Michael Lakony, alleges that the UN officials are purposely keeping quiet on issuing their response.
“How can one explain the behaviour of UN officials who have neglected responding to our people? They have not outlined what they will do for the people who are facing threats and injustices from the government,” Mr Lakony says.

The State Minister for Relief, Disaster Preparedness and Refugee, Mr Musa Ecweru, says the residents chose to camp at the UN offices yet the government has an open arm to host them in case they felt displaced from their homes.

“It is not the duty of UN to host the people especially within their country. This is the responsibility of the government,” he says.
He notes that the government is always ready and willing to help the people who are genuinely displaced with the relief items.
Apaa land, measuring about 40 square kilometres, is at the centre of dispute between residents and leaders in Amuru and Adjumani districts.

Mr Bernard Amwine, the communications officer for UN High Commissioner for Human Rights, says the concerns of Apaa community were transmitted through the UN Resident coordinator to the highest levels of authority in Uganda.
He says as part of its efforts to support, their office has expressed its view to all relevant stakeholders that the situation of Apaa should be resolved through dialogue, without resorting to the use of force.
“As the petitioners have used a peaceful stance, our office has accepted that the group temporarily stays at the premises, but we have repeatedly asked that they leave voluntarily,” Mr Amwine says.