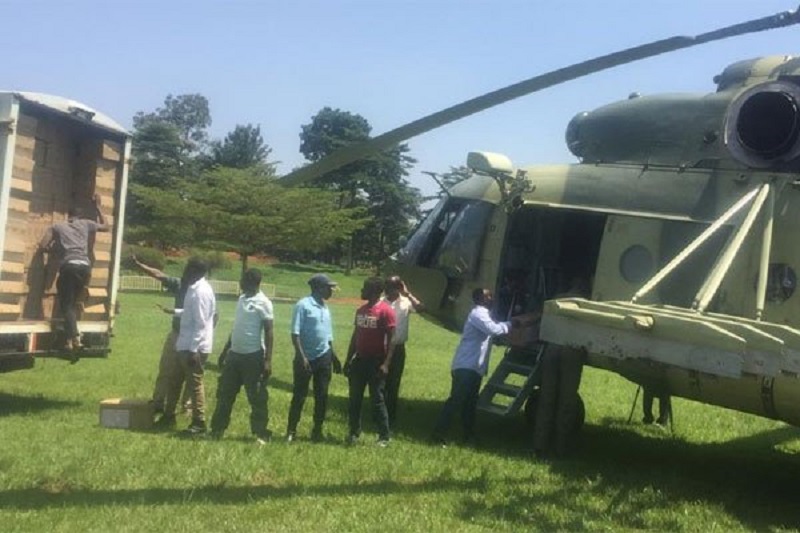 Workers carry pesticides from a truck onto a waiting army helicopter that airlifted them to Karamoja sub-region.

Desert locusts that invaded Uganda through Amudat District via North West Pokot in Kenya on Sunday, have spread to Nabilatuk and Nakapiripirit districts in Karamoja region.

According to Mr Martin Owor, the Commissioner for Disaster Preparedness, in the Office of the Prime Minister, the process of spraying the pests will begin on Monday and the ground surveillance teams are monitoring the movement of the swarms.

According to Mr Owori, motorised sprayers that will be mounted on pickups and tractors to spray the locusts have been moved to Karamoja sub-region.

He said a team of UPDF soldiers and Uganda Wildlife Authority wardens will to assist officials from the Ministry of Agriculture to spray the pests.

The government has procured 2,000 manual pumps and 18,000 litrers of  cypermethrin and chlorpyrifos chemicals,

according to Mr agriculture Benius Tukahirwa, the Senior Agriculture Inspector, Crop Protection Department in the Ministry of Agriculture.

Earlier, the Minister of State for Agriculture, Mr Aggrey Bagiire said that pesticides that would be used to spray the insects, will be airlifted to Karamoja.

Desert locusts, according to United Nations Food and Agriculture Organizations (FAO) have destroyed vegetation in Kenya as they move toward Uganda.

They travel in dense, crackling swarms which can contain as many as 80 million locusts per square kilometre.

FAO says the locusts can live for up to five months, depending on weather and local conditions. They can lay eggs that can hatch after two weeks, with locusts maturing to adulthood in two to four months on average.

They can destroy about 192 million kilogrammes of vegetation in two days.