IN July 31, 2020 BY witnessradio.org 741 views Leave a comment
land, livelihood and investment Livelihood 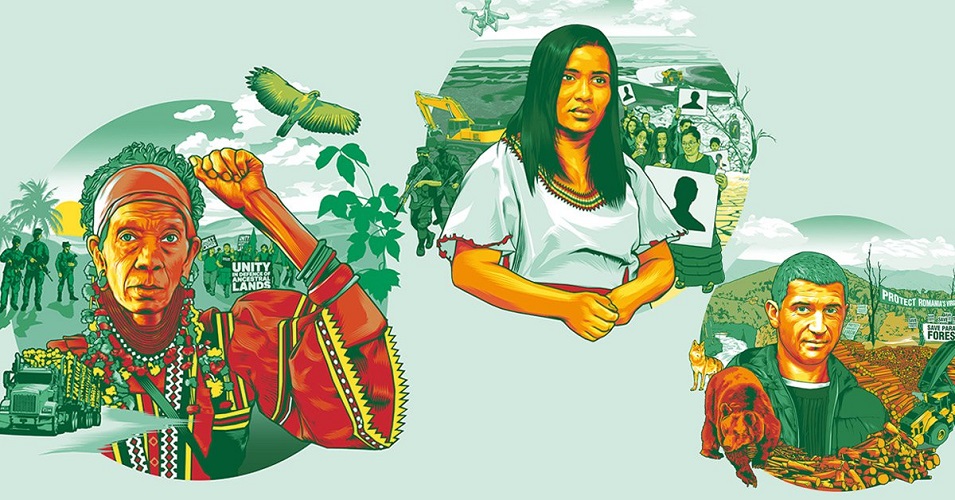 For years, land and environmental defenders have been the first line of defence against climate breakdown. Yet despite clearer evidence than ever of the crucial role they play, far too many businesses, financiers and governments fail to safeguard their vital and peaceful work.

The climate crisis is arguably the greatest global and existential threat we face. As it escalates, it serves to exacerbate many of the other serious problems in our world today – from economic inequality to racial injustice and the spread of zoonotic diseases.

For years, land and environmental defenders have been the first line of defence against the causes and impacts of climate breakdown. Time after time, they have challenged those companies operating recklessly, rampaging unhampered through forests, skies, wetlands, oceans and biodiversity hotspots.

Yet despite clearer evidence than ever of the crucial role they play and the dangers they increasingly face, far too many businesses, financiers and governments fail to safeguard their vital and peaceful work.

Shockingly, over half of all reported killings last year occurred in two countries: Colombia and the Philippines.

Both have seen a rise in attacks against land and environmental defenders since 2018, with killings in Colombia in 2019 peaking at 64 activists – the highest Global Witness has ever recorded in the country. Reports show that the murder of community and social leaders has risen dramatically in Colombia in recent years.

The United Nations Human Rights Office points to several reasons for this growing tide of violence, such as the challenges of implementing the 2016 Peace Agreement including land reform and programmes meant to encourage farmers to swap illegal crops for legal harvests. The resulting shifts in local power dynamics is driving increased violence.

The Philippines has become even deadlier for activists since 2018, having been consistently named as one of the worst places in Asia for attacks against defenders.

But things got even worse in 2019 with the number of murders rising to 43. The relentless vilification of defenders by the government and widespread impunity for their attackers may well be driving the increase.

Over two-thirds of killings took place in Latin America, which has consistently ranked the worst-affected region since Global Witness began to publish data in 2012. In 2019, the Amazon region alone saw 33 deaths. Almost 90% of the killings in Brazil were in the Amazon. In Honduras, killings rose from four in 2018 to 14 last year, making it the most dangerous country per capita in 2019.

Over 1 in 10 defenders killed were women. Often the backbone of their community, women tend to take on more of the responsibility of looking after children and elderly relatives, on top of trying to earn a living and work as activists. Women who act and speak out may also face gender-specific threats, including sexual violence. If other members of their household are defenders, they can become targeted too.

On average, four defenders have been killed every week since December 2015 – the month the Paris Climate agreement was signed, amid hopes of a new era of climate progress. Countless more are silenced by violent attacks, arrests, death threats, sexual violence or lawsuits.

Agribusiness and oil, gas and mining have been the biggest industrial drivers of this conflict – and, as they cut down our forests and pump carbon dioxide into our atmosphere, they are also the sectors pushing us further into runaway climate change.

Land and environmental defenders play a vital role in protecting these climate-critical forests and ecosystems.

Recent research shows that indigenous and local communities around the world are managing forests that contain carbon equivalent to 33 times our current annual emissions – although even this staggering figure is likely to be an underestimate.

At the same time, research is clearly showing that indigenous-managed lands have lower deforestation rates and better conservation outcomes than protection zones that exclude indigenous peoples.

The dark side of these facts is that indigenous communities also suffer a highly disproportionate number of the attacks on defenders. Insecure land tenure, irresponsible business practices and government policies that prioritise extractive economies at the cost of human rights are putting these people, and their land, at risk.

Addressing these issues should be at the forefront of the world’s efforts to tackle climate change. But as things stand, we are in danger of missing an enormous opportunity.

The question for all of us is whether we want to build a better, greener future for our planet and its people. The answer lies in following the leadership, the campaigns and solutions that land and environmental defenders have been honing for generations.

We must listen to the demands of land and environmental defenders and amplify them.

Inspired by their bravery and leadership, we must push those in power – businesses, financiers and governments – to tackle the root causes of the problem, support and safeguard defenders and create regulations that ensure projects and operations are carried out with proper due diligence, transparency and free prior and informed consent.

And you can help too.

Large-scale agriculture, mining and logging are still driving the majority of attacks against environmental defenders across the world.

But it does not have to be this way – we’re exposing these companies with irresponsible practices, and those that finance them and urging them to take action to ensure their operations do not harm our environment and those who stand up to protect it.

Join our campain, advocate for land and environmental defenders, and amplify their causes and their voices as we work to bring in better rules to regulate destructive, climate-wrecking activity at the hands of companies like these.

Global Mobilisation to End the Criminalisation of Land Rights Defenders