IN October 4, 2019 BY witnessradio.org 620 views Leave a comment
farm news 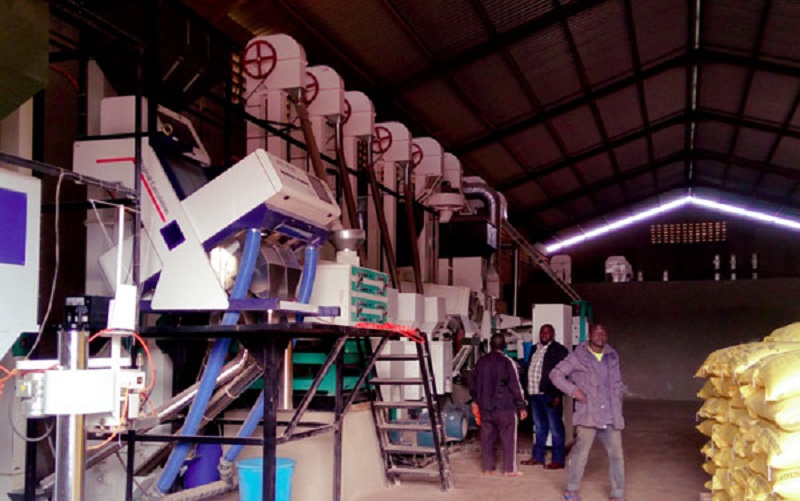 Redudant rice milling machines at Damaza Grain Millers Limited factory in Jinja District. The company is among those that laid off some workers due to low production capacity. PHOTO by Joanita Mbabazi

Recently, rice farmers, millers and exporters petitioned the Speaker of Parliament Rebecca Kadaga to stop the eviction of rice farmers from wetlands in favour of foreign investors.
Mr Isaac Kashaija, the chairperson of the Rice Business Sector Association, said the rice farmers were stopped from growing rice in wetlands, a situation that has left many jobless.
“If we are growing rice in wetlands and government thinks we are not doing it the right way, then we need to be guided on the best modern farming practices of growing rice in because rice as a food crop best grows in wetland areas. We are surprised that the wetlands are being given to investors to grow rice, leaving us the local farmers with no space to grow rice and the only option is to quit rice growing,” said Mr Maliba Christopher a farmer in Bugweri district.
To prove their outcry, Daily Monitor visited some of the rice milling factories and the rice gardens. At Damaza Grain Millers Limited factory, redundant machines greet us. Here, few workers also load skeletal sacks of rice for few locals who had come to buy the commodity. This was the same case at Wereke Investment Limited factory.
Much as we expected to hear sounds of machines sorting rice, or some activity involving loading and offloading sacks of both of sorted and paddy rice (rice with husks), this was not the case.
According to the owner of Damaza Grain Millers Limited, Mr Drake Magara, they laid off some workers due to low production capacity.
“On a daily basis, we used to mill around 50 tonnes of rice in a day. But now, we only mill five tonnes of rice.”
Mr Magara attributes this to farmers who ditched rice farming for other food commercial crops that can be grown on land as some have already faced eviction from wetlands to grow rice.
“Farmers have been evicted from the rice fields. They no longer get enough paddy rice to mill forcing them to lay off some workers. I have been employing 50 employees both those operating the machines to sort out rice and others in packaging loading and offloading. But I was forced to remain with 25 employees only,” Mr Magara says.
He adds that instead, imported rice has flooded the country.
“Why would we rely on foreign food like rice yet it can be locally grown here?” Magara adds.

A rice farmer in a wetland in Jinja. Farmers have been evicted from their rice fields. PHOTO BY Joanita Mbabazi

Low price
The price of local rice has gone down because local millers and retailers have to earn something to compete with the imported rice from other countries.
“This discourages farmers because a kilo of paddy rice costs Shs500, from a farmer. At retail price, a kilo of local fine rice costs Shs2,500 while a kilo of imported white fine rice is Shs3,000. We cannot sell at Shs3,000 because we shall not make more sales since we are competing with the imported rice as well on the market,” Mr Geoffrey Sudayisi, a retail business man in Jinja District says.
The rice sector employs more than 49,000 both millers, importers and farmers. But with the continuous low production, these are likely to abandon the business. Already, 57 companies that have been operating in losses of about Shs38b have closed business due to low production and meeting costs such as electricity and paying off workers. Bu and taxes cannot be affordable as they are earning less from the business.
Demand
According to Mr Isaac Kashaija, chairperson Rice Business Sector Association Limited, between 2007 and 2014, the demand of rice was about 225,000 metric tonnes but factories only produced 165,000 metric tonnes. From 2014 to 2017, the demand for rice increased to 499,200 but they were only able to produce 272,881 metric tonnes of rice.
In 2017 to 2019, the demand did not increase and remained the same like in 2017 but they were only able to produce 215,741 metric tonnes of rice. This implies that despite increased demand for rice, they cannot meet the production capacity to satisfy the all local consumers who need rice due to the increased decline in the production levels.
Mr Kashaija also complains that the increased importation of white fine rice from other countries like Tanzania which is not subjected to tax is greatly crippling the local rice business for people to earn from it.
14 rice import companies which include SWT Tanners Limited, General Agencies Uganda Limited,Ssuna Limited , Willex Commodities Limited, Akhcom Limited, Jassani General Trading Limited, Singa Rice Limited, Armour Trading Company Limited, Jan Mohammed Investments Limited,Galorre Intrenational Limited, Imba Foods Uganda Limited, Zen Trading Limited and Mabu Commodities, have been relieved of paying tax due to a delayed court appeal filed by these companies against Uganda Revenue Authority at the Commercial Court since 2014 opposing the 18 per cent VAT.

Import duty
These argue that they are currently paying 75 per cent import duty on rice, six per cent Withholding Tax, and 1.5 per cent infrastructure levy. Therefore, the addition of 18 per cent VAT levy would make their products expensive and unaffordable for customers.
“These are greatly enjoying the market space in the country as no ruling has been made yet since 2014 to date. During that financial year of 2014/2015, the VAT tax law was meant to work but these companies objected it saying this was abrupt and they were not notified as they had targeted to import rice for the festive season that year.
“But since 2014, up to now we find this unfair because when some exporters go to Tanzania much as it is part of the East African Community (EAC), they are charged taxes. But these importers must also pay the 18 per cent VAT tax,” Mr Kashaija says.
According to Mr Everest Kayondo, Kampala City Trader’s Association chairperson, importers within the EAC cannot pay tax on imports and exports due to the free movement of goods of services in all partner states. However, those who are not under this body find it fair enough to pay tax for their imported rice especially from Pakistan and India.