LivelihoodMubende district land board to cancel land title over fraud 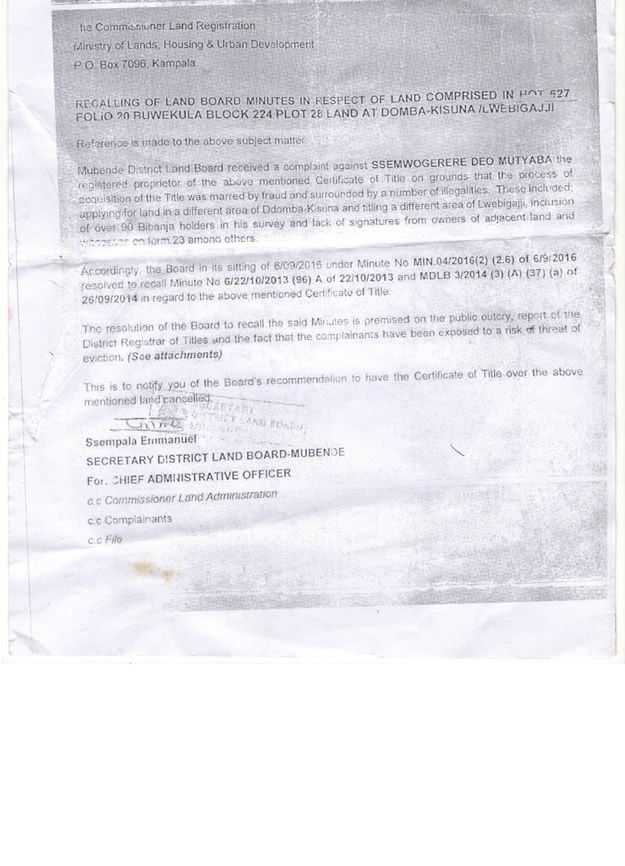 Members of Mubende district land board have recommended for the
termination of a certificate of land title following findings that its
acquisition process was marred by fraud.

According to a one-page letter dated September 20th 2016, a copy of
which was obtained by Witness radio, Emmanuel Ssempala, the secretary
Mubende District land board, stated that several complaints were lodged
against a one Deo Ssemwogerere Mutyaba who had been registered as the
proprietor of land situated on block 224, plot 28 at
Domba-Kisuna/Lwebigajji in Buwekula county.

In respect of the complaints, investigations into the complaints were
carried out by District Registrar of titles and it was established that
indeed fraud and a number of illegalities surrounded the acquisition
process.

The fraudulent practices applied in the process, according to the
letter, included applying for land in different area at Ddomba-Kisuna
and titling a different area of Lwebigajji, inclusion of over 90 Bibanja
holders in Ssemwogerere’s survey and lack of signatures from owners of
adjacent land.

In justification of their decision to recall the certificate of title on
the said land, the letter explains that it was all based on the public
outcry, a report by the District Registrar of titles and the fact that
the complaints had been exposed to a risk of threat of eviction.