MAAIF spoilt for choice between hybrids and indigenous crops 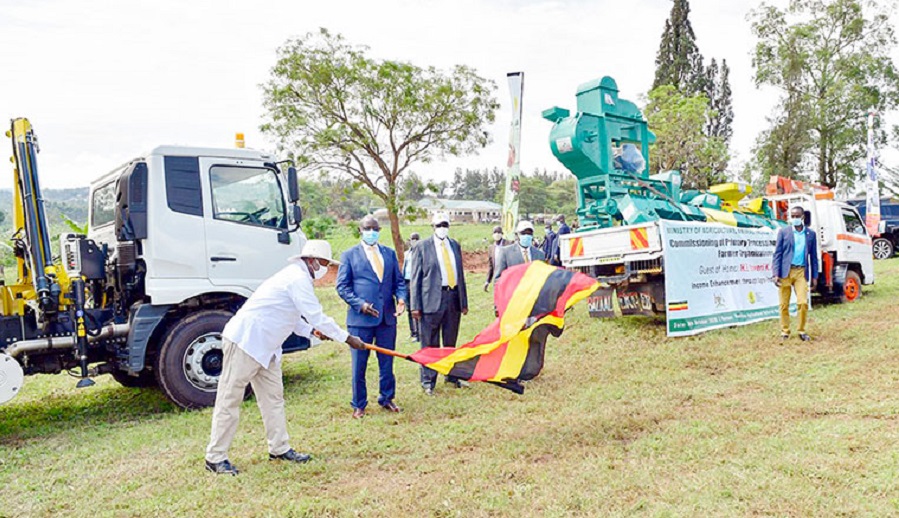 On October 10, President Museveni went out of his normal routine to express frustration about the quality of some products he consumes.

“The things that my people have been buying from the market….these are not onions. They look like onions but there is nothing you feel when you eat. Even some of the oranges…when you put them in the mouth, you feel nothing,” he said.

“So, I want to warn you people, especially the National Agricultural Advisory Services (Naads) and the commissioner in charge of crops; save us from these carelessly imported seeds.”

The president said this while flagging off agro-processing equipment for post-harvest and value addition farmer organisations at Namalere Agricultural Referral Mechanization Centre in Wakiso.

Incidentally, MAAIF had a week earlier released an updated policy on crops, which in itself calls for the preservation of indigenous crops.

The remarks have since opened up debate about Uganda’s agricultural strategy to tackle the double-edged sword which on one side calls for the preservation of indigenous crops that are rich in nutrients but low on yields and, on the other hand, commercialization of the industry through hybrid crops that have high returns on investment. Indeed, several technocrats in MAAIF have expressed optimism on the president’s remarks.

Pius Wakabi Kasajja, the MAAIF permanent secretary, concurs with the president that some onions no longer have that original taste and aroma, but he also emphasizes that indigenous onions are still available on the market.

“As agricultural products keep on improving genetically, they lose out on certain attributes. That’s why you find that these big onions which mature quickly and are easy to peel, don’t have that original aroma because of the improvements done to them to make commercial sense. So, as a ministry, we have a double-edged approach in the interest of transforming subsistence farming into commercial agriculture. If you’re going commercial, there is no way you can achieve that on indigenous-only output.”

Kasajja also noted that there is a tendency to erroneously refer hybrid crops as genetically modified organisms (GMOs).

“Hybrids result from the deliberate crossing of two different parent varieties from the same species to improve quality and resistance to diseases,” he says.

He also intimated that the National Agricultural Research Organisation (Naro) is researching ways to improve and increase the production and productivity of indigenous crops.

“This is going to address the president’s concern by increasing the research on how to improve production and productivity for the indigenous crops.”

Meanwhile, it is worth noting that Ugandan agricultural produce holds international acclaim. A 2016 study by the Organic Agriculture Worldwide put Uganda second behind only India when it comes to the number of local organic producers (190,552).

In the third National Development Plan (NDP) III, which runs from 2020 to 2025, efforts in MAAIF are geared towards increasing production and productivity as well as improving on post-harvest handling, storage and agro-processing which directly supports the agro industrialization agenda.

This, according to Paul Mwambu, the commissioner, department of Crop Inspection and Certification at MAAIF, is aimed at improving on the competitiveness of crops in the local and international markets plus empowering institutional capabilities.

In doing so, MAAIF’s major focus is commercialization of the agriculture sector through empowerment of farmers by providing affordable credit and insurance for agriculture.

MAAIF is also implementing an agro-industrialization program together with other ministries of Trade, Industry and Cooperatives; Local Government; Water and Environment as well as Finance, Planning and Economic Development.

Whereas the president cautioned about what he termed as carelessly imported seeds, it turns out that these imported hybrids are spearheading the commercialization of the agricultural sector.

NARO AHEAD OF TIME

“We are doing this in two ways; through the in-situ conservation approach, whereby genetic crops are conserved through the designation, management and monitoring of biodiversity in the same area where it is encountered,” he says.

“We have about 4,400 different plants and crops and have partnered other countries like Norway to keep duplicate samples there just in case something goes wrong here. Also note that we have six community crop gene centres countrywide, where farmers provide staple seeds or crops within the region to create a community seed bank.”

When The Observer visited Nakasero market, there was a variety of fruits and vegetables but conspicuously, the prices of a particular item varied.

For instance, a sack weighting 5kg of indigenous onions goes for Shs 50,000 while a 5kg sack of hybrid onions is at Shs 35,000. The same applies to tomatoes, carrots and chicken.

Alex Kiguli, a market vendor, says while most customers hardly differentiate the varieties and mostly got for the cheapest, there are still a number of keen customers who prefer indigenous products.

“Our local chicken is expensive at about Shs 40,000 but people who understand its sweetness don’t mind about the price yet a broiler of the same weight goes for half the price,” he says.

In the end, it is all about choice. It’s just a matter of knowing where to find indigenous products even though they are priced higher.