IN December 23, 2017 BY Witness Radio 1388 views Leave a comment
Media For Change Network 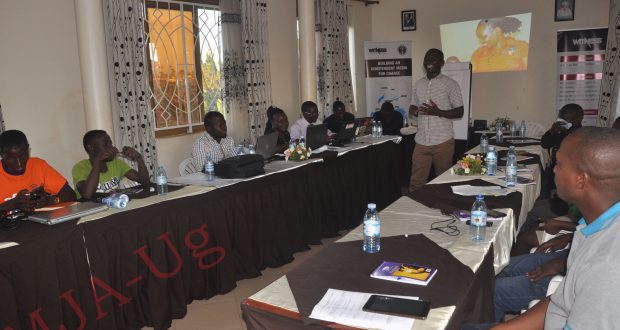 Journalists have been encouraged to indulge themselves in promoting issues affecting citizens and articulating them to have a desired transformation of their communities in the spheres of advocating for the rights of the voiceless whose issues are not given priority.

Despite the fact that journalists are not independent due to the fact that they are barred from some publications because of the commercialization of media space and the influence of politicians  to media house owners, journalists are expected to stick to their professional codes of conduct.

The call was made by the Executive director of the Witness Radio, an online Radio Geoffrey Wokulira Ssebaggala during a three days training on investigative and Content Regulation for journalists under Mubende Journalists Association-Uganda that was held at the Panorama Suits in Mubende town, thus encouraging  journalists in the country sides to pick interest in investigation, by fronting issues of human interests in all dimensions  because journalism is a task to exposed people’s grievances so that duty bearers are held accountable.

Sigh of relief as Red Pepper Journalists are released on bail