special investigative programmeland, livelihood and investmentMubende evictees yet to get own homes 10 years later

Mubende evictees yet to get own homes 10 years later

IN August 12, 2020 BY witnessradio.org 323 views Leave a comment
land, livelihood and investment Livelihood 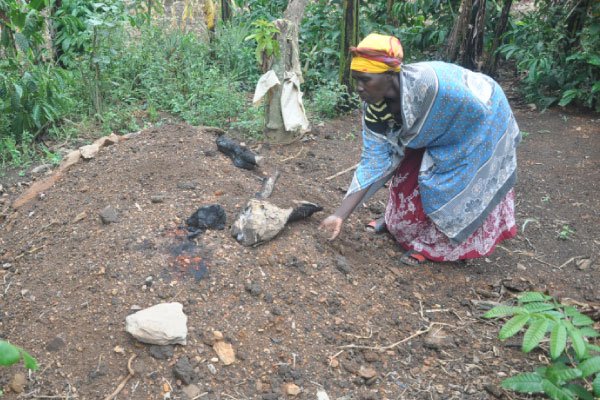 Ms Shantel Tumubone, one of the displaced residents, shows the portion of land where she buried her husband on Thursday. PHOTO/ JOSEPHINE NNABBAALE

When New Forest Company evicted Ms Shantel Tumubone, 50, and her family from their ancestral home in Kyamukasa Village, Kitumbi Sub-county, Kassanda District, they promised to compensate them to enable them find alternative land for settlement.

Ms Tumubone says she moved to nearby villages, looking for land in anticipation of receiving compensation.

However, 10 years later, Ms Tumubone’s family is still waiting for the compensation. She is among the 500 households who are homeless after they were evicted from land measuring 501 acres to pave way for a pine tree project.

Their land was taken over by New Forest Company, which has since planted pine trees on it.
According to Ms Tumubone, following the eviction, her husband managed to get casual employment on a farm in Kabweyakiza Village.

“But two years later, my husband Marvin Bulugi fell ill and died because we could not afford his medical bills having lost everything during the eviction,” she says.

“The owner of the farm asked me to pay Shs1 million for the portion of land to bury my husband and since I had no cash, we resolved that I do causal work for eight months to cover the debt,” she adds.
Ms Pauline Nyesigire, another evictee, says during the eviction, she lost contact with her parents and ended up doing odd jobs on farms in Mubende District.

“At the age of 10, I tried to do casual labour at people’s farms, but it was too tedious and the payment was too little. I was forced into an early marriage at 12 years hoping for a better future but hardly two years into marriage with a six-month-old baby, I lost my husband,” she says.

Mr Sulait Behangana, who is also among the affected residents, says prior to the eviction, he owned more than 15 acres of land where he planted coffee, banana and sugar cane plantations.

“I have been reduced to a pauper; I have to dig in other people’s plantations to get what to eat,” he says.
Mr Julius Ndagize, the chairperson of the displaced households, says several mediation meetings with managers of New Forest Company have not borne fruit. “We secured 500 acres of land in Kampindu Village, Kitumbi Sub-county, where to resettle those people. Of the 901 affected families, 453 were allocated pieces of land and resettled. However, 448 families haven’t been compensated to date,” he says.

Mr Alex Kyabawampi, the senior corporate social responsibility programme manager at New Forest Company, says they struck an understanding with the affected households to establish a legally registered cooperative society with about 900 members, which they have done.

“Since the agreement was signed, the cooperative has purchased 500 acres of land in the vicinity of the Namwasa Central Forest Reserve with 100 acres earmarked for resettlement of households and 400 acres for agricultural projects. Homes are being built and agricultural projects have started with the planting of bananas, coffee, maize, cassava and beans,” he says.

Mr Kyabawampi adds that they are also considering providing safe and clean water and income generating projects to the affected households.