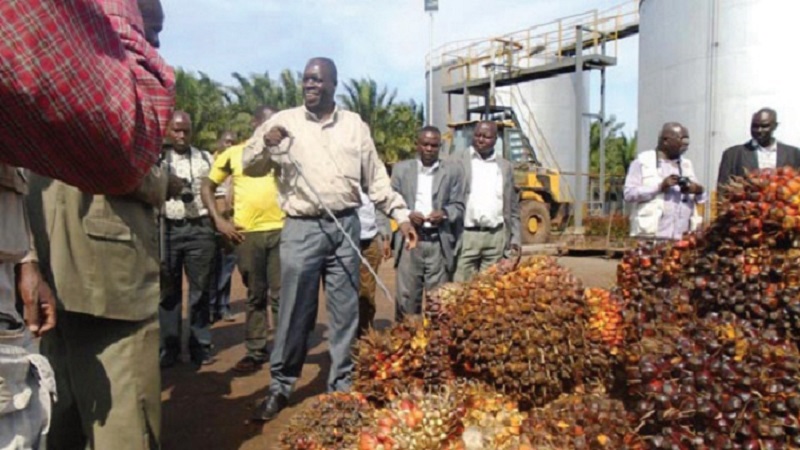 Kampala, Uganda | THE INDEPENDENT | The Uganda government began handing over tracts of land for palm-oil production to Wilmar International Ltd.’s local unit, removing the final hurdle for an expansion project that’s been delayed for almost a decade.

The government in East Africa’s third biggest economy started allotting the land on Lake Victoria’s Buvuma Island in the last quarter of 2017 to Bidco Uganda Ltd., which plans a second nucleus palm-oil plantation. The state is procuring land on behalf of the company to hasten the process. Presently the country imports about 200,000 metric tons of palm oil annually, mainly from Malaysia and Indonesia. Palm oil is used in a wide range of products including food, soap, cosmetics and biofuels.

“The process involves willing buyer and willing seller,” Kodey said, without divulging how much land the company has received so far. Smallholder farmers on the Island may plant a combined 4,000 hectares, he said. The company that plans to invest US$70million in the new oil palm estate, currently produces 30,000 metric tonnes, with potential to expand to 45,000 metric tonnes of edible oil per annum.

This development comes at the time edible oil consumption in the country has increased over the past decade from just 2.5kilogramme in 2005 to 4.5-5kilogramme per person per annum. However, this is still below the 21 kilogramme per person per annum as per the World Health Organisation. Based on the agreement signed between the Uganda government under the Vegetable Oil Development Project and Bidco, the government was supposed to give the former firm 24,000 hectares and an additional 16,000 hectares of land throughout growers countrywide.

However, poor land documentation and resistance from landowners have stalled the project. Bidco was to start planting palm oil trees from July 2012, when the implementation date was re-scheduled to April 2014, and later to an indefinite date due to the lack of sufficient land. Land ownership on Buvuma Island has been a thorny issue ever since the government showed interest in growing oil palm trees in the area.

Oil palm programme to roll to other areas

In June 2012, residents of Buvuma Island led by their district woman MP Nantume Egunyu protested the government’s move to give Bidco land on the island, insisting that residents have to be compensated to allow the project to start. Besides the nucleus estate and the outgrower scheme, the together with Bidco also plan to establish a processing plant on the island as part of a $147 million programme.

Meanwhile the Minister of Agriculture, Vincent Ssempijja, announced in March this year that the government has secured $200m to roll out the oil palm project to other parts of the country.   He said the government had tasked oil palm scientists to take soil samples for testing following a successful tour of the project on Bugala Island.

The new areas under consideration includes; Buikwe, Mukono, Mayuge, Namayingo, Masaka and the Bunyoro Subregion. Bidco began processing palm oil from its   plantation in the Ssese Islands in the northwestern part of Lake Victoria in Uganda in 2009 under a $100 million World Bank financed vegetable oil development project.

The project was supported by the International Fund for Agricultural Development and the World Bank, with Bidco Uganda Ltd and Wilmar Plantations playing a major role as the private investors. Environmentalists, however, have been against Bidco’s expansion into Buvuma and further north into Lake Victoria, citing a rise in environmental degradation and land grabbing. However, he High Court exonerated the manufacturer in 2016 for alleged deforestation for a vegetable oil farmland.