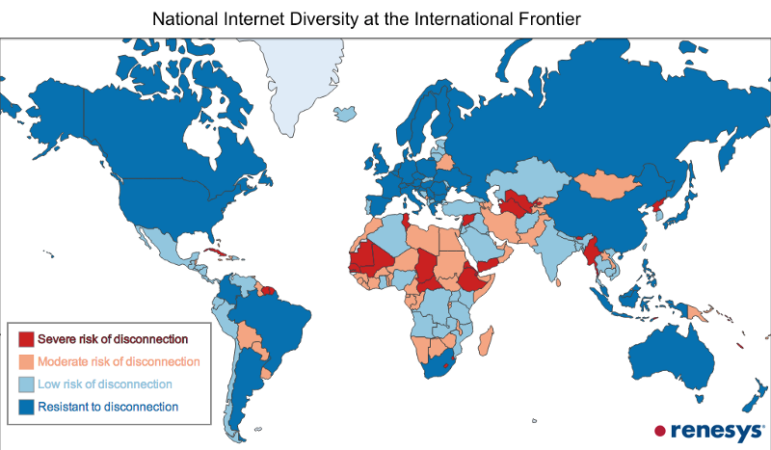 “The internet for journalism is now like the air you breathe,” said Befeqadu Hailu, an Ethiopian journalist and a member of the Zone 9 blogger collective who was arrested in April 2014 and charged with terrorism. “Without the internet, modern journalism means nothing.”

Yet, the internet is something that journalists in multiple African countries are often forced to do without.

Between May 30 and June 8, the Ethiopian government shut down the country’s internet service for the third time in the last year. These shutdowns have occurred in the context of an ongoing crackdown on the press by authorities, who are currently keeping nine of the 17 journalists recorded on the Committee to Protect Journalists’ (CPJ) 2016 prison census behind bars.

Since the state-run Ethio Telecom holds monopolistic control over both internet and telephone service, the government has the ability to effectively sever its population’s communications on a whim.

“We’ve been through extraordinarily difficult times [during] the ten days of [the] shutdown,” Tsedale Lemma, editor-in-chief of the Addis Standard, told CPJ over WhatsApp.

The internet for journalism is like the air you breathe. Yet, journalists in multiple African countries are often forced to do without it.

There was a complete digital blackout during the first few days, after which broadband became available, said Hulu. But since broadband is largely only available for businesses and organizations, many journalists continued to face major challenges. The frequent clampdown on internet access prevents them from securely communicating with sources or publishing on time.

After the third day of the shutdown, Lemma ran between hotels to find internet access. “This is insecure as you are using the business centers there, which is not a secure connection,” Lemma said.

On June 25, 2017, Congo-Brazzaville’s internet connection was restored after a 15-day shutdown that was reportedly caused by a mysterious fishing boat that damaged the country’s submarine cables.

While journalists and analysts inside and outside of Congo-Brazzaville speculated over the truthfulness of a boat’s involvement, private mobile companies were able to provide some satellite connection. Nevertheless, journalists remained hampered.

“As long as the internet is not stable, many field, remote reporters or correspondents are facing big problems to send their stories, their work,” a Congo-Brazzaville-based journalist told CPJ on condition of anonymity for fear of reprisal.

For 93 days between January through April 2017, the Cameroonian government, with cooperation from private mobile operators, cut off internet access in the two western, Anglophone regions of the country.

The government also imposed a suffocating culture of fear through a campaign of arrests and detentions, according to a forthcoming CPJ report on Cameroon’s use of anti-state legislation against journalists. Attacks on the press increased dramatically. At least eight journalists were arrested in connection with their journalism (six of them remain in detention in Yaoundé).

Without the internet, reporting on people’s daily realities became extremely difficult. The media environment in Cameroon was choked. Fear of reprisal, coupled with the internet shutdown, restricted communication between online and offline regions. Coverage of ongoing abuses was stifled.

“Content [was] sent to the [media] station [by] road,” a Cameroonian broadcast journalist based in the English-speaking regions, who requested to remain anonymous for fear of reprisal, told CPJ. “We could therefore not relay timely news items from other areas because we had to wait for them two [to] three days after.”

With such limited information, speculation reigned supreme, the journalist said.

As governments improve their surveillance tactics, journalists are forced to use a small number of internet-based communication platforms in pursuit of private conversation.

Frequent clampdown on internet access prevents journalists from securely communicating with sources or publishing on time.

“You pick up your phone to make that call, and you know your phone is tapped, you know there is someone on the other end listening,” Lemma told CPJ. “People don’t [even] feel safe meeting in person.”

“It’s no more a secret that many journalists are actually [wiretapped],” a Congolese journalist told CPJ over WhatsApp on condition of anonymity for fear of reprisal. “Also, internet is very important for the journalists’ work, since some social media [helps] to bypass [wiretapping] or line monitoring when they need to check or get or publish some facts.”

This perspective is supported by a 2011 report, which highlights how “the November 2009 law on electronic communications and the 2010 decree on identification of [telecommunications] subscribers show that the [Congolese] state has seemingly unlimited power to invade the privacy of its citizens in the interest of security … It seems that the state can access personal data under any pretext without the consent of the individual concerned, who can do nothing to stop it from happening.”

When journalists are too afraid to speak on regular telecommunication lines for fear that their government will intercept the communication and arrive at their door, encrypted internet-based tools like WhatsApp or Signal offer a practical method of communication and information dissemination.

In his 2015 piece titled “Surveillance Forces Journalists to Think and Act Like Spies,” CPJ’s staff technologist Tom Lowenthal explains how important encryption technology is for journalists to connect with sources and write important stories. Without secure communication tools, journalists’ ability to communicate privately with sources becomes limited and self-censorship flourishes.

“It’s no more a secret that many journalists are actually [wiretapped],” a Congolese journalist told the Committee to Protect Journalists.

“Internet shutdowns are particularly censorious in areas where fear of reprisal for critical journalism reigns, and unfortunately, this fear exists in many of the African countries that have experienced internet shutdowns,” said CPJ’s emergencies director María Salazar-Ferro. “Journalists should never feel that their work is putting them or those they communicate with in danger.”

Internet shutdowns are on the rise. In 2016, the #KeepItOn campaign documented 56 shutdowns worldwide, including in six African nations. This is up from 15 documented shutdowns in 2015, according to the same data.

Many of these shutdowns occur during electionsand other moments of political tension, when access to information is critical for the public to make informed decisions.

In response, internet freedom advocates have mobilised to compel governments and telecommunications companies to resist shutting off internet access.

In March 2017, the Freedom Online Coalition, which is composed of 30 national governments working to advance internet freedom, expressed deep concern over the “growing trend of intentional state-sponsored disruptions.” They also offered a list of five good practices for governments to avoid shutdowns and seize the economic and social growth brought by the internet.

Many internet shutdowns occur during elections and other moments of political tension, when access to information is critical for the public to make informed decisions.

In Ethiopia, for example, a 30-day shutdown cost the government upwards of US$8.5 million while a separate 15-day shutdown in the Republic of the Congo cost over US$72 million, according to a 2016 Brookings Institute report.

On April 10, 2017, a creative advocacy proposalwas put to the African Network Information Centre (AFRINIC), the body that allocates Africa’s IP addresses, which are identifiers for computers and other devices that connect to the internet. The proposal called for the denial of new IP addresses for one year to countries that order their internet to be shut down.

Though media reports indicate that the proposal was denied as a result of intense opposition from African governments, AFRINIC subsequently issued a statement calling for African governments to “renounce the use of internet shutdowns as a policy tool.”

Internet advocates are also targeting telecommunications companies and internet service providers in an effort to get them to resist government calls for shutdowns.

On February 15, 2017, nearly a month into Cameroon’s internet shutdown, CPJ was among 27 signatories on a letter to three Cameroon telecommunication companies’ CEOs, requesting “support in restoring internet access”.

A month later, United Nations Special Rapporteur on free expression David Kay’s reportto the UN Human Rights Council highlighted the responsibility of private “provider” companies to “ensure that they do not cause, contribute or become complicit in human rights abuses” involved in shutdowns.

“Being able to survive as a journalist in this age without access to the internet — the idea itself is very daunting,” Lemma told CPJ. “But beyond the idea, it’s everything from losing your security [to] not being able to communicate the way you want.”

Respect for press freedom means letting it breathe by enabling journalists to conduct their work. Without internet access journalists cannot publish online, nor can they conduct thorough investigations or talk securely with their sources. To have a free press, African governments need to #KeepItOn.

This post first appeared on Africa Portal and is cross-posted here with permission.

Jonathan Rozen is a researcher with the Committee to Protect Journalists’ Africa Program. He previously worked for the Institute for Security Studies (Africa).