I write Human RightsOxfam Report 2011: When Indigenous communities named Rwanda nationals by investor to run away from corporate accountability 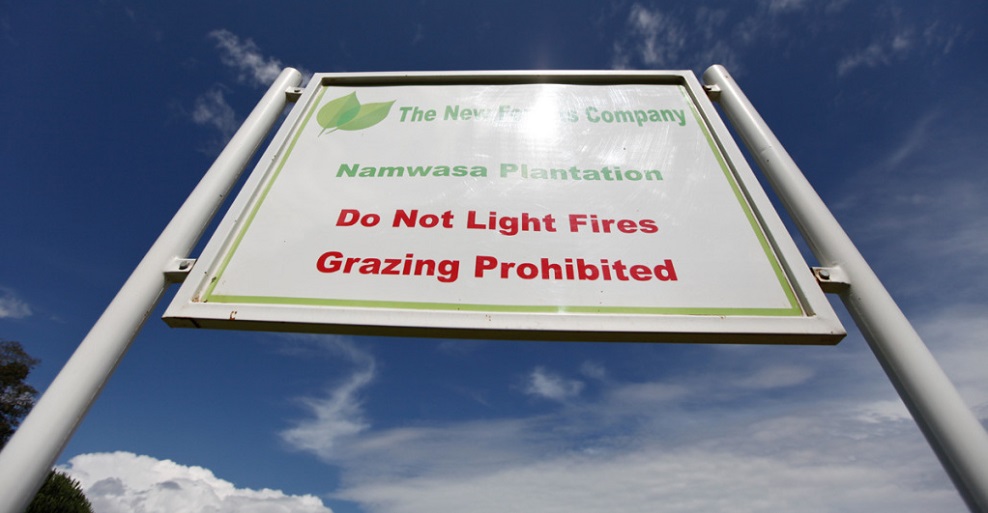 By witnessradio.org Team as extracted from Author’s report…

A very different story was told by the New Forest company sent to audit NFC for the FSC certification of its Namwasa plantation in Mubende.

The auditors noted the ongoing land dispute when they visited the area in February 2010: ‘in excess of 540 households (mostly from Rwanda) have recently illegally settled on Namwasa FMU. They have erected a large number of structures and started cultivating agricultural fields.’ According to the auditors, the government had made repeated attempts to persuade the people to leave. To facilitate this process, they said, the company offered to pay compensation, but the government declined this as it would set ‘an unacceptable national precedent.’

When the auditors returned later that year to check on progress, they were reassured that, ‘Encroachers were allowed to harvest their annual crops and remove their structures and other portable properties. By 1 March 2010, the company surveyed the land and found that all illegal settlers on the plantation had voluntarily vacated the reserve… There were no incidences of injury to the encroachers or forceful eviction reported during this process.’

The FSC certifies forestry investments that adhere to best operating practices regarding labour, social, and environmental issues. While the FSC’s Principles and Criteria require the protection of local rights of ownership, use, or access, the certification of operations sometimes falls short of this requirement. Oxfam believes this is the case for the FSC certification of NFC’s plantation in Mubende, as the nature of the evictions appears to constitute a disregard for these rights. For instance, FSC Principle 2 on tenure and use rights and responsibilities requires that ‘appropriate mechanisms shall be employed to resolve disputes over tenure claims and use rights’ and that ‘disputes of substantial magnitude involving a significant number of interests will normally disqualify an operation from being certified.’ Principle 4, on community relations and worker’s rights, requires appropriate mechanisms ‘for providing fair compensation in the case of loss or damage affecting the legal or customary rights, property, resources, or livelihoods of local peoples.’ NFC cited, in a letter to Oxfam, a surveillance audit report conducted by the FSC in June 2010, which concluded that ‘the company has followed peaceful means and acted responsibly to resolve the issue of encroachment and currently there are no tenure and/or use right disputes of substantial magnitude to affect the activities of the company.’ However, in light of the pending court cases, involving significant numbers of claimants, as well as the communities’ reports that no compensation was provided for losses of property and livelihoods, Oxfam does not see how FSC Principles 2 and 4 can have been adhered to.

The IFC has Performance Standards relating to the rights of local people facing ‘involuntary resettlement’ similar to those of the FSC. The IFC reviewed NFC’s Namwasa operation as part of the due diligence for its $7m equity investment in Agri-Vie, a private equity agribusiness fund whose portfolio includes NFC. On the one hand, the IFC concluded that NFC had been unable to comprehensively apply the principles guiding resettlement in IFC’s Performance Standard on land acquisition and involuntary resettlement. This standard recognises that project-related land acquisition and restrictions on land use can have an adverse impact on communities using the land and therefore requires that affected communities are provided with compensation, resettlement, and livelihood restoration.69 Yet, because this was a case of government- led settlement and because NFC had demonstrated, in IFC’s view, ‘all possible efforts to engage and collaborate with the Government agency,’ the IFC was satisfied that NFC demonstrated compliance with the standard ‘to the extent allowed by the Government.’ The IFC assessment does not cover NFC’s Kiboga operations.

The EIB also has Environmental and Social Principles and Standards for the projects that it finances. The EIB funded the expansion of NFC’s Namwasa operation through a €5m loan, together with a €650,000 subsidy grant to finance the company’s Corporate Social Responsibility (CSR) work. Like the IFC, the EIB also supports NFC indirectly via a $12m investment in Agri-Vie. The EIB says it was aware of land disputes between communities and the NFC and the risk this posed to the project. It says that, irrespective of the outcome of the ongoing legal procedures, it is satisfied by the project’s Environmental Impact Assessment, and that it believes NFC to have acted within its rights. The EIB says it considers the project to be fully in line with its Environmental and Social Principles and Standards. These include a standard on involuntary resettlement that requires that ‘people whose livelihoods are negatively affected by a project should have their livelihoods improved or at minimum restored and/or adequately compensated for any losses incurred.’ Again the EIB does not appear to have assessed the social impacts of NFC’s Kiboga operations.

HSBC bank has invested around $10m in NFC, has 20 per cent ownership in the company, and also has a seat on the NFC board. It made its investment in NFC conditional upon the company making adequate progress towards certification from the FSC.72 HSBC also has a number of sustainability policies for ‘sensitive sectors’, including a Forest Land and Forest Products Sector Policy, and says that NFC meets the Bank’s sustainability requirements for this the sector. However, HSBC’s policies (and those of other investors) rely heavily on assurances provided by the independent confirmation of external bodies, like FSC, and in Oxfam’s view this case highlights serious failures in those processes of independent assessment

The NFC denies any role in evicting local communities in Mubende and Kiboga, claiming that the government would be responsible for any evictions. The company says, ‘Evictions from government land – which go on in Uganda every day – are solely in the hands of the government and its designated authorities such as the Uganda Wildlife Authority, the National Forestry Authority, and the Ministry of Lands. We are expressly prohibited from dialogue and interaction from any illegal encroachers.’

Equally, the company says, ‘as licensees we are expressly prohibited from offering anyone on government land any compensation.’

The Ugandan government, at local and national levels, appears to have played a central role in the evictions in Mubende and Kiboga. International rights standards are clear that governments are the primary duty bearers for the respect, protection, and promotion of the rights of their citizens.

Until the mid-2000s, authorities had seemed to tolerate or even endorse local communities’ rights to the land in some instances. For example, in Mubende, descendants of war veterans were offered land with approval of the local government authority, and people’s applications to convert from customary to freehold or leasehold title, or to register public land for agricultural purchases, were being processed by authorities. In Kiboga, local councils and administrative structures representing the evictees were recognised by the government. The Minister of General Duties, wrote in 2004 of 20,000 people in Luwunga Forest, ‘these people have stayed in this place since the early 1970s.’ This attitude began to shift, however, particularly with the creation of the National Forestry Authority (NFA) in 2003, according to Ugandan NGO ACODE, which studied the role of the NFA towards ‘encroachers’.