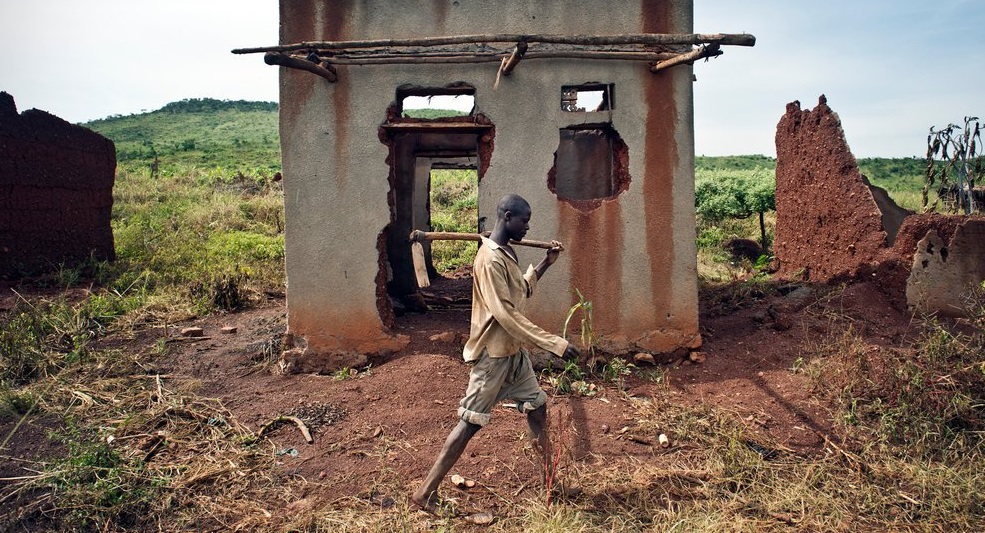 By witnessradio.org Team, as extracted from Oxfam report

Oxfam research indicated that around 7,400 people were living on the Namwasa plantation and at least 15,191 people on the Luwunga plantation.

NFC and government officials have called these people ‘encroachers’ (or ‘illegal encroachers’). Oxfam believes this is a dangerously loaded term because it pre-judges people’s rights and dehumanizes them, making it easier to justify violent tactics. And it is arguably a highly misleading term too, because the people maintain that they did in fact have lawful entitlement to the land and were testing that argument in ongoing legal cases. These claims are resisted by NFC and neither case has been concluded.

In Mubende, the Second World War veterans and their descendants say they were allocated land in recognition of service, while others say they had bought, were gifted, or inherited land in the area since the 1980s. In their legal pleadings, the claimants assert that they are ‘either bona fide, lawful occupants and/or customary tenants and are protected by the constitution of the Republic of Uganda and the land laws of Uganda.’

NFC states that these proceedings, launched against the company, were misdirected since the government, rather than NFC, was responsible for undertaking the evictions. It says that the claims ‘have been taken most seriously and have been the subject of extensive legal counsel and internal inquiry’, and maintains that ‘the cases have failed to appear in court due to the inability of the plaintiffs to assert a legitimate case’.

The Mubende claims, it says, have ‘been confirmed erroneous by the extensive investigation conducted by the third Prime Minister’s office’. NFC base this on an FSC audit, conducted by SGS, which states that the validity of the claims is ‘highly dubious’ and that the company acted responsibly to resolve the issue of encroachment. However, Oxfam has been told by lawyers representing the community members that the cases are still active, and this has been acknowledged by NFC. This means that claims brought by thousands of people remain unresolved.

In both legal cases, the High Court considered that the communities’ concerns were sufficiently urgent and their arguments sufficiently strong to justify granting orders restraining evictions until the full case could be heard in court.

NFC claimed – in its 2011 Project Design Document submitted to the CDM – that people vacated the land in Mubende ‘voluntarily and peacefully’. However, the communities Oxfam spoke to describe the evictions as anything but voluntary or peaceful. People told Oxfam that the army and police were deployed in the area to enforce the evictions and that many people were beaten during the process.

Some villagers also claim that casual labourers whom they believe were employed by NFC joined the police and army in burning homes, destroying crops, and butchering livestock. The pleadings in the claim brought by the Kiboga community allege that NFC ‘purporting to be a licensee of [the NFA], trespassed on the Plaintiffs’ land, destroyed homes, crops, and animals of the Plaintiffs and attempted to evict the Plaintiffs’. They also allege ‘trespass, uncivility, harassment, and abuse’ by NFC and its agents. The Mubende evictees claim that employees of NFC were ‘evicting, harassing, erasing their plantations, demolishing their houses, intimidating, mistreating’ them. News of the evictions, albeit not referring to NFC as the perpetrator, was published in local media and the dispute was described in the communities’ law suits filed in 2009.

NFC firmly denies involvement in any evictions or violence and says ‘there were no incidences of injury, physical violence, or destruction of property during the voluntary vacation process that have been brought to the attention of NFC’. It continues to rely on the FSC audit of the Mubende evictions which states that ‘there were no incidences of injury to the encroachers or forceful eviction reported during this process’. It also states that it received no reports of violence from the District Police Commissioner or the NFA, and that no such incidents were observed by NFC employees. From materials provided by NFC to Oxfam, it does not appear to Oxfam to have conducted its own detailed investigations into any allegations of violence committed during the evictions. It has conceded some concerns about Askar, the private security company it contracted.

In its Project Design Document submitted to the Executive Board of the CDM, NFC noted that ‘surrounding communities sometimes report that the Askar security guards contracted by the company extort money from them’ and that the guards had ‘generated negative perceptions of the company.’ In response, NFC recognised a need to commit to ‘training its own staff internally and will guard against extortion in the future with increased accountability and auditing’. The company says that there were threats to the lives of NFC staff, which prompted a ‘need for protection during the vacation process’.

In the course of its research, Oxfam discovered that in Kiboga – the scene of the first evictions beginning in 2008 – senior NFC representatives met with local officials on 21 August 2008. The meeting agreed that NFC would pay seven million shillings ($2,500) to conduct a ‘population survey’ and, depending on its results, make available at most two square miles (1,280 acres) for five years to the ‘historic occupants’ of the land. In their testimonies, people described to Oxfam that a comprehensive survey did indeed happen. People said they were photographed and the value of their land and assets recorded. They felt that NFC and local officials were making a genuine effort on their behalf.

It seems that the process did not result in resettlement or compensation for the evictees. NFC acknowledges that they commissioned and paid for a survey, carried out by the Kiboga District Planner. Worryingly, they admit that they have not received the final census report, and told Oxfam that they doubted the findings – believing the figure of over 15,000 people to be ‘inflated’. NFC claims it is vital to ‘look behind us to see the imprint our footprints have left behind’, but does not appear to have any data they regard as conclusive about the number of people affected by their operations. IFC Performance Standards, however, require companies to carry out a census with appropriate socio- economic baseline data to identify the persons who will be displaced by the project.

In a letter to Oxfam, NFC describes a series of consultations that took place in the months leading up to the evictions ‘which clearly outlined the conditions under which the vacations should occur, the laws pertaining to land use of central forest reserves, and the timeline to be observed.’ It also claims that the evictions were voluntary. However, Oxfam’s research has revealed consistent testimony from evictees of both districts to the effect that they were not consulted and did not consent to losing their land, homes, and livelihoods. The minutes of the August 2008 meeting between NFC and Kiboga district officials to discuss resettlement of the evictees show that no community representatives were present at that meeting. One community leader explained that the proposal was presented to the community in a public meeting, which was not consultative. The proposal was rejected as unacceptable because too little land was offered and the solution was only temporary.