IN February 14, 2018 BY witnessradio.org 1978 views Leave a comment
I write Human Rights 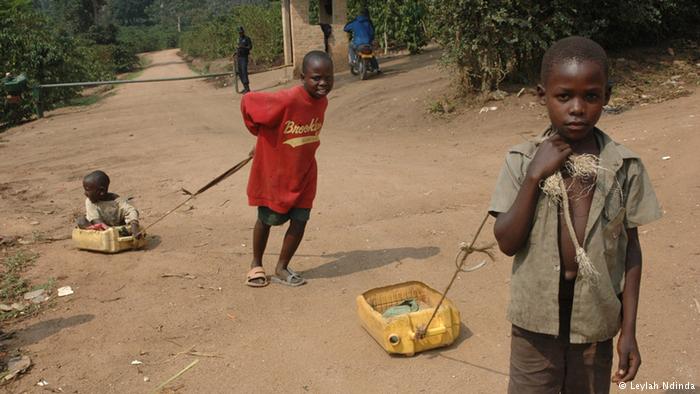 In 2001, more than 4,000 people were evicted from land in Uganda after it had been acquired by a German coffee firm on a 99-year lease. The company insists the deal was above board, but an NGO is now raising doubts.

Many of the residents from Kyengeza village in Mubende district have always insisted that they were forcefully driven off from their land, which lies approximately 170 kilometers (106 miles) from Uganda’s capital Kampala.

Margaret Nakiyingi, 29, is one of the evictees. She now lives in a small wooden house located close to Kaweri coffee plantation. Kaweri is a subsidiary of Neumann Gruppe based in Germany.

After the eviction came despair

Margaret’s estranged husband works at the Kaweri coffee farm where he earns $1.5 (1.12 euros) a day. Margaret, who has four children, does not have a regular income but still has to find $15 a month for rent for the tiny house, an enormous amount of money by her standards.

“We don’t have a life to enjoy. We move like human beings but deep down in our hearts we are not living a good life,” she told DW correspondent Leylah Ndinda.

This is because she has serious financial problems. “We are now suffering because we are in rented houses and have no land to cultivate. Some of our colleagues acquired land away from the coffee farm,” Margaret said.

“Water is challenge. The coffee farm managers constructed a water tap for us but we do not get water all the time, “ Margaret said.

“Another problem is firewood. They kicked us out from our land, but when we go to the coffee farm to collect firewood they beat us up,” she complained, saying they don’t have an alternative source of firewood.

The majority of the people living in Kyengeza village were evicted from their farms with a promise from the government that they would be compensated. Twelve years later John Bosco Senginiya, a casual laborer on one of the privately owned farms, said they were subjected to physical abuse during the eviction.

“I didn’t even get 100 Uganda shillings, but they paid us with a beating,” he added.

When asked by DW if they knew how much compensation they were entitled to, many residents were unsure with one admitting that they “did not know the compensation rate”.

Neumann Kaffee Gruppe, (NKG in Uganda), the German coffee company behind the controversy, insists that it leased the land in good faith from the Ugandan government.

According to Neumann, which operates in 28 countries worldwide, only 25 families in Mubende district refused to move and they were then driven off the land by the Ugandan government.

In a document posted on their website, Neumann Company has denied any allegations of land grabbing or carrying out illegal evictions.

After 12 years, this dispute over land in Uganda has resurfaced in Germany.

FIAN international, an NGO that campaigns for people’s right to food, started a campaign to protest against what it calls “brutal evictions”. It is also demanding adequate restitution for those who lost their land.

The protests led Germany’s Development Minister Dirk Niebel to write a letter to FIAN asking them to cease their activities. The minister warned that such accusations could have far reaching consequences for Uganda’s coffee industry. “It is a known fact that since last year some coffee traders in Germany have started to boycott Ugandan coffee,” Niebel told the German broadcaster Deutschlandfunk.