IN February 8, 2018 BY witnessradio.org 2451 views Leave a comment
I write Human Rights 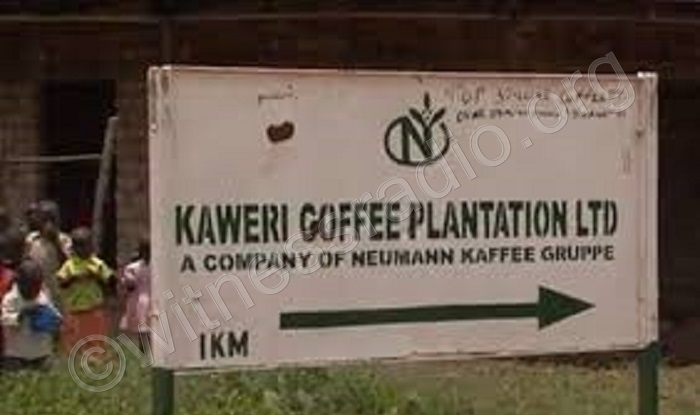 Mubende-based Kaweri Coffee Plantation Ltd. is embroiled in controversy after its parent company, the Neumann Kaffee Gruppe (NKG) of Hamburg, Germany, was accused of unlawfully evicting peasants from their land.

The complaint against NKG was filed by a German NGO, FoodFirst Information and Action Network (FIAN), that faults NKG for violating the Organisation for Economic Co-operation and Development (OECD) guidelines that govern the behaviour of multinational companies.

FIAN said that the complaint was filed on behalf of 400 small-scale farmers in Madudu sub-county, Mubende, who were allegedly, forced to vacate their land without adequate compensation. The land in question was subsequently leased to Kaweri by the government.The case was lodged on 15th June 2009 via the OECD contact at Germany’s Federal Ministry of Economics in Berlin.

Sandra Ratjen, FIAN’s Advocacy and International Policies Coordinator told The Observer that, “the complaint was a response to the lack of success-seeking legal remedies before national courts in Uganda, as well as to the unsuccessful attempt to dialogue and find [an] out-of-court agreement with the company.”

NKG acquired the 11.6 square miles of contested land from the Uganda Investment Authority (UIA) on a 99-year lease, and the plantation was inaugurated by President Yoweri Museveni and Michael Neumann, Chairman of NKG, in August 2001.

However, advocacy group ActionAid International (Uganda), which works with the dispossessed farmers and first alerted FIAN to their plight, says that in the same month, over 2,000 people were forcibly evicted from the land and denied adequate compensation.

Evictions were allegedly, conducted by soldiers from a nearby army barracks led by Mubende’s then Resident District Commissioner. Residents from the villages of Keitemba, Luwunga, Kijunga and Kiryamakobe reportedly had their houses razed and property looted.

They lost their means of livelihood and are currently struggling to access adequate food, shelter, water, healthcare and education, FIAN said.

“Neumann did not do anything wrong,” says Dr. Maggie Kigozi, Executive Director of Uganda Investment Authority. “The UIA bought that land from the landowner and the landowner had been the one to resettle the bona fide occupants, or squatters, or whatever you want to call them,” she said.

Kigozi admits that given the size of the land, and the conflicting claims over its earlier ownership, some people might feel they were poorly compensated, but the investment itself cannot be faulted.

“Neumann has invested in a large coffee plantation”, she said. “They produce high-end coffee, they have huge out-grower schemes. The township of Mubende, which used to be a miserable little town, is now booming, because so many people are now employed, either in the plantation, or they are benefiting from being out-growers.”

Still, many believe that the company’s actions have not translated into a fair deal for the aggrieved parties. “There were irregularities in [the] supposed compensation and relocation”, says Charles Businge, Country Director of ActionAid Uganda.

“There were failures to establish true facts regarding who were the occupants of the land before eviction. There were issues that led to forceful eviction by the army even before the notice period had elapsed. We think that if all these issues had been handled professionally, such a case would not have emerged.”

According to Ratjen, “Only 2% of the evictees have been compensated and even in their case, compensation is not adequate following national and international standards.” FIAN explains that the OECD – which is itself committed to promoting sustainable economic growth and democratic processes in market economies – has guidelines that require multinational enterprises to act responsibly in host countries by respecting human rights.

Thus, it believes NKG should have ensured such rights were guaranteed before concluding its contract with the Uganda government. Peter Kayiira, an evicted Madudu resident, today heads ‘Stand up and fight for your Rights’, a loose coalition of the 400 dispossessed farmers on whose behalf FIAN has filed its complaint.

In 2002, the coalition, supported by FIAN and ActionAid, moved to sue both the Uganda Government and NKG. “According to the Constitution and the laws, the land is still ours”, Kayira explains.

“So in that case, the restitution of our former holding is inevitable. He says the group is suing for damages incurred by the evictees as their houses were razed and property looted, as well as punitive costs should the court find the treatment meted out to them to have been malicious, while also claiming legal costs.

They are however, still open to out-of-court settlements that will allow them to legally re-settle on two square miles of the contested land and provide suitable compensation for livelihoods lost.

Jeremy Hulme, the Managing Director of Kaweri Coffee Plantation Ltd appeared unaware of the complaint filed with the OECD, telling The Observer it was a matter that could only be dealt with by NKG’s legal office. He said that the company’s actions and impact simply do not warrant the legal suits brought against it. “We are entirely the innocent party,” said Hulme.

“We paid for and took possession of an unencumbered piece of land, so surely, it is up to those that sold that land, to deliver such. We have no case, as far as we’re concerned, to answer.”

He added that Kaweri grows Robusta coffee over on 1,800 hectares, processes roughly 1,500 tons per year (much of it for export), and is the only substantial producer of ‘Uganda washed robusta’ in the country.

Moreover, it claims to employ some 250 permanent staff, and between 800 to 1,500 seasonal workers.  Ratjen agrees the Uganda government must primarily address the case as it has a duty to protect its citizens under international law.

However, “This does not mean that the company has no responsibility towards the respect of human rights when it invests abroad. NKG cannot pretend that it could not appreciate the impact of the establishment of the plantation on the lives of the forcibly evicted people.

The eviction itself took place to enable the project of the company.”  On its part, UIA is concerned, but not unduly worried by this latest controversy to embroil one of its most cherished foreign investors.

“The OECD will listen to both sides of the story”, Kigozi states. “They are not about to make decisions based on rumours.”