Kiryandongo – Uganda – Despite the existence of government’s order stopping land eviction during the COVID-19 lockdown, three multinational companies with backing from state police, army and private security firms have intensified the use of violence to grab more land from poor communities with an unmistakably high level of impunity.

On 16th April 2020, the government of Uganda issued a notice to individuals and companies to halt land evictions of communities off their land. This followed a group of Kiryandongo District communities affected by actual or threatened forced evictions petitioning government, accusing multinational companies including Agilis Partners/Joseph Initiatives/Asili Farms; Kiryandongo Sugar Company and Great Seasons over what they called illegal and violent evictions being aided by Kiryandongi Police and Soldiers attached to 4th, Division of Uganda People’s Defense Force.

Companies have used the 35 days COVID-19 lock-down ending on May, 5th, 2020, with a possibility of extension with or without modification, to forcefully dispossess more than two dozens of smallholder farmers. They have been demolished houses belonging to affected communities and hundreds of acres of maize, sweet potatoes, cassava grown and owned by poor communities. Under the protection of state police, army and private security companies, the companies’ workers have used tractors to plow and demolish communities’ gardens without compensation. The communities have always depended on subsistence farming to feed families and meet basic needs. 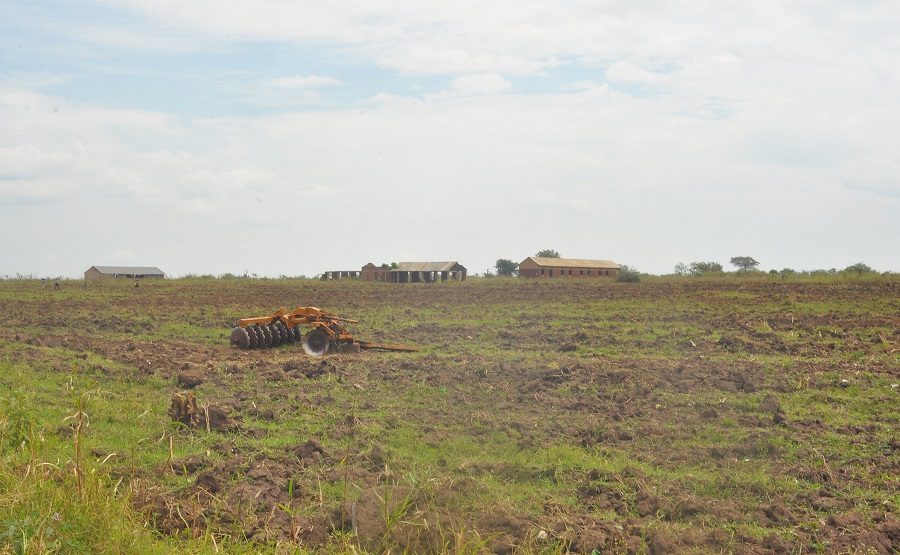 Multinational companies including Agilis Partners/Asili Farms are dispossessing the poor communities in Kiryandongo to grow the same cash crops, like maize, as those of  the displaced communities. They then convert the initially self sustaining and food secure poor communities into their laborers after depriving them of their means of livelihood and grabbing their most important asset: land. Agilis Partners/Asili Farms has benefited from financial assistance from Department for International Development (DFID), The United States Agency for International Development (USAID), Dutch Impact Investor DOB Equity and Dutch Trust Fund through Common Fund for Commodities. It is this money that they are using to disposes, displace and impoverish rural communities in Kiryandongo after compromising state machinery.

According to witnessradio.org independent research, individual community members whose properties have been destroyed, have at the same time been blocked by Kiryandongo district police leadership headed by Assistant Superintendent of Police (ASP) Joseph Bakaleke from opening up criminal cases against companies and their agents. While police blocks communities from reporting the criminal cases of torture, malicious damage to property, assault, threatening violence and other crimes, they happily arrest and detain residents on tramped charges by the said companies.

According to Agarubanda Emmanuel, another victim whose pigsty was broken into by agents of companies and made off with 29 pigs and more killed at his property, said these attacks are carried out late in the night.

Land grabbing on the rise during lockdown

Acreage of land under cultivation increases in northern Uganda

By the Witness Radio team,

The state prematurely closed its prosecution in the trial of the eight community land rights defenders after it failed to produce its last witness, the Investigating Officer (IO).

Upon closure of the prosecution, the defense lawyers applied for the dismissal of the case for want of prosecution, adding the evidence before the court too weak to sustain a conviction

The court has directed the defense to file its written submission and serve the prosecution by 10th February 2022.

Since 2020, the prosecution has only presented two witnesses, which resulted in the trial being marred with unnecessary adjournments and transfers of trial magistrates.

The prosecution alleges that on September 4th, 2020, the eight community rights defenders, while at Kisalanda village, allegedly threatened to harm one of the police officers guarding Great Season SMC Limited’s plantation.

Great seasons SMC Limited is one of the multinationals that have forcefully evicted thousands of local farmers and criminalized activities of community land rights defenders for resisting illegal and forceful evictions of poor communities in the Kiryandongo district. The others include Kiryandongo Sugar Company and Agilis Partners Limited.

Five smallholder farmers have been arrested and charged with malicious damage by Mubende police, Witness Radio Uganda has learned.

The victim farmers include; Kabuka Levi, Lubwama Robert, Bulegeya Erisa, Byakatonda David, and Byamukama Yuda are among the victims of the company attacks. Upon arrest, they (victims) recorded statements and later were released on police bond.

Before their arrest, the farmers had opened several cases against their tormentors (company workers) for attacking and destroying their properties worth millions of Shillings. Several files were opened including SD.ref/09/07/12/2022 and SD.ref/12/07/12/2022 against company workers. However, to their surprise, the police made a U-turn and got them arrested.

On December 7th, 2022, in the wee hours of that day, a group of over 20 casual workers linked to Formosa limited, a tree planting company based in Mubende district attacked several families, properties like houses and food crop plantations were destroyed, and several farmers were severely beaten with intentions of forcing them off their land.

“When we reached Mubende police, we were all arrested and interrogated for almost an hour before recording statements on malicious damage charges. The company reported that we cut its trees and had photos as evidence which we did not do.” Mr. Kabuka Levi told Witness Radio in an interview.

In the meantime, the same company in 2017 caused the arbitrary arrest and imprisonment of 5 community land rights defenders for 15 years and 35 years on murder and other charges. The five include; Paul Sinamenya, Richard Ssemombwe, Fenehansi Kaberuka, Esau Hategeka, Godfrey Bukenya, Yonnah Ssebanenya, and Sserugo Sam Ssemigo.

Witness Radio appealed against the conviction of 5 defenders for review and is waiting on the appellant court to set the hearing date of the case.

Since 2011, Formasa company under the protection of private security guards and the police has grabbed 2590 hectares that were a source of livelihood for hundreds of poor communities.

The criminal trial of eight (8) Community land rights defenders on charges of threatening violence is to resume on the 23rd of January 2022, with the state producing its final witness.

The defense lawyers are preparing a submission of no case to answer upon closure of the prosecution’s case because of the insufficiency of the case.

So far, the prosecution has presented two witnesses before the court since 2020, whose trial sessions have been marred with unnecessary adjournments and transfers of hearing magistrates.

The prosecution alleges that on September 4th, 2020, the eight and others, while at Kisalanda village, allegedly threatened to harm one of the police officers guarding Great Season SMC Limited’s plantation.

In November 2020, the prosecution disclosed to defense lawyers and informed the court that investigations were closed and the prosecutor’s chambers were ready to proceed to trial.

Great seasons SMC Limited is one of the multinationals that have forcefully evicted thousands of local people and later criminalized activities of smallholder farmers that have resisted illegal evictions in the Kiryandongo district. The others include Kiryandongo Sugar Company and Agilis Partners Limited.

The trial will start at 10 am East African Time.

The committee calls for the protection of projects’ host communities.

Statement on the Dakar 2 Summit: “Climate smart agriculture” will worsen the climate crisis

How land grabs are causing food insecurity: A case of a community land rights defender in Mubende district forced to buy food for a family of 13 people for the last five years.

A dead body recovered in a resident’s garden is causing sleepless nights to community members in fear of arrests and false charges.