IN March 1, 2018 BY witnessradio.org 1480 views Leave a comment
I write Human Rights 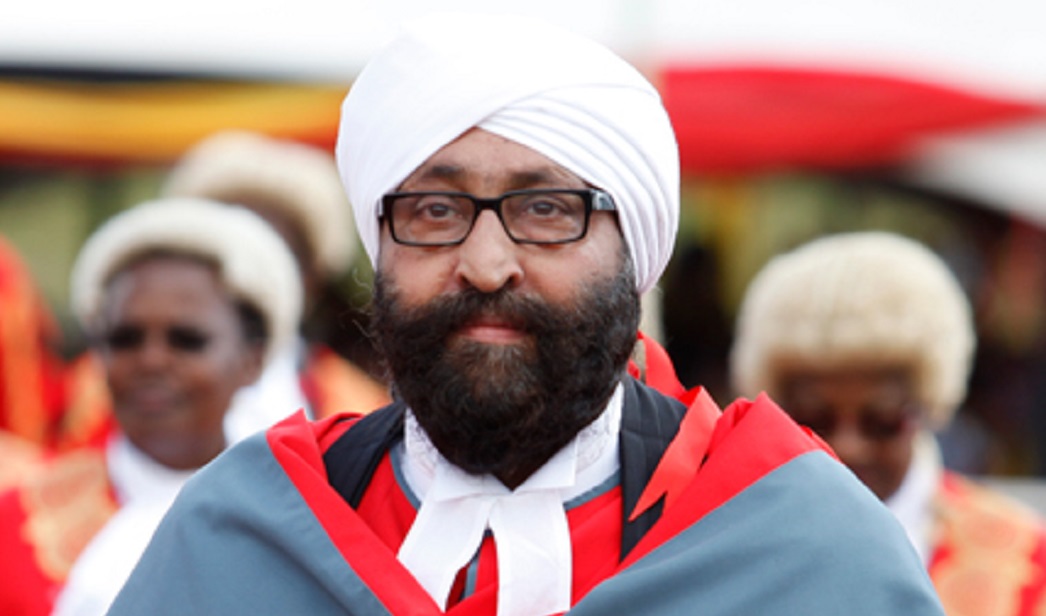 Justice Anup Singh Choudry has ordered two prominent lawyers to pay Shs 37 billion for allegedly being ‘dishonest’ in a case in which an investor evicted 410 tenants from a 11.6 square mile piece of land in Mubende to pave way for a coffee plantation and factory.

The ruling has shocked the legal fraternity and renewed the war between Justice Choudry and the Uganda Law Society, which has long called for him  to be fired.

The judge said lawyers James Nangwala and Alex Rezida should pay the colossal figure as damages to the tenants for misadvising a government entity (Uganda Investment Authority) to purchase land that had encumbrances.

The duo is supposed to pay the money within 30 days from the date of the ruling and cannot appeal against the ruling unless they first deposit the full sum in court. The judge said this should serve as a lesson that ‘government cannot be an open cheque book for the negligence, fraud, dishonesty and theft of their lawyers.’

Nangwala and Rezida represented UIA, which identified the land for the investors, Neumann Kaffee Gruppe (NKG) of Hamburg, Germany, in August 2001. Choudry, in the March 28 ruling, 2013, said Nangwala and Rezida were grossly, recklessly and deliberately negligent in failing to complete the purchase of the land, contrary to the conditions in the sale agreement.

“They should  have been more diligent because the overall quantum of the transaction including the compensation that was payable under the contract was in the region of billions of shillings; and the issue of compensation of tenants in the contract could not have  been overlooked. They would have known full well the negligent  implications of not concluding the terms of the sale agreement,” he said.

This is in addition to Shs 27bn accrued as interest on all the above damages 10 years since the case was lodged in court.

If the lawyers cannot pay, Choudry said, the tenants may apply to the Law Society or Law  Council to be paid from the compensation fund where a member of the public has suffered from the dishonesty of the lawyers.

But Nangwala, laughing, described the ruling as a set of ‘superfluous statements which have no meaning in law.’

He said they would not pay the money because the two parties to the suit were the tenants and government.

“He fabricated facts of his own,” Nangwala told The Observer on Saturday. “I can tell that it is a vindictive judgment meant to pay back those who stand by the decision of ULS to take him to court.”

ULS has petitioned the Judicial Service Commission, demanding that Justice Choudry be removed from the bench, citing improper conduct while he was practising law in the United Kingdom. The society also petitioned the Constitutional court over the matter, which is now before President Museveni. This has drawn a wedge between the judge and ULS, with some members vowing to boycott his court.

According to an email to members written by the newly elected ULS president, Ruth Sebatindira, and seen by The Observer, Choudry has crossed the ‘rubicon.’

“An attack has been made on the Uganda Law Society which was not even a party to this suit in circumstances that suggest that the judge may be taking his wrath out on members of the bar who abide by the ULS position not to appear before him,” Sebatindira wrote a day after the ruling.

In April 2012, ULS requested President Museveni to set up a special tribunal to investigate allegations of improper conduct on the part of Choudry. According to documents filed in court in 2008 by ULS, Choudry was on October 31, 2000 convicted of making an excessive bill of costs amounting to £1 million (Shs 4 billion) in a libel case he was handling on behalf of a Sikh leader against the Sunday Times, a UK newspaper.

ULS says that Choudry was subsequently struck off the register of lawyers and solicitors from the United Kingdom and his law firm, Singh and Choudry, was closed down. Choudry denies the allegations which he has challenged in court. Bruce Kyerere, a former ULS president, described Choudry’s ruling as “the epitome of lunacy” and further evidence that he should not be a judge.

He said it was unconstitutional for the judge to demand that lawyers first deposit the entire amount in court before they can lodge an appeal.

“His continued presence on the bench is a disgrace to the judiciary,” Kyerere said.

The controversial case was first lodged in 2002 by a group of tenants. However, judges it was allocated to kept rescheduling it. In 2009, with the support of a German NGO, FoodFirst Information and Action Network (FIAN), the tenants revived the case.

The tenants argued that NKG acquired the 11.6 square miles of contested land from UIA on a 99-year lease illegally. The land covered the villages of Keitemba, Luwunga, Kijunga and Kiryamakobe. They said that they were forcefully evicted from the land by soldiers from a nearby army barracks with the assistance of Mubende’s then Resident District Commissioner, Perez Katamba. In the process, they lost their property, livelihood, shelter and education.

They claimed that the compensation given was insufficient and not comparable to what they had lost. Choudry took over the case in 2009 and in the early stages Nangwala and Rezida asked him to disqualify himself because ULS had questioned his integrity. They also feared that being lead lawyers in the petition filed by ULS against Choudry, he might be biased against them.

But Choudry rubbished their worries and maintained that he would be impartial.

He said: “…my  performance  in  the  judiciary  has been impeccable and I  demonstrated exemplary behaviour in the  past five  years as a judge. I did not do anything wrong under our Constitution. In the past I also ruled in favour of clients who were represented by Nangwala and Rezida. I suspect there is  some other motive why James Nangwala and Alex Rezida do not want to appear before a gray bearded judge in this case.”

After three years of court arguments, Choudry ruled on March 28 that the tenants had been illegally evicted without being fully compensated. He instructed that they be paid damages, dating back 10 years, since they were evicted. Choudry faulted UIA for not carrying out due diligence, supervision and checks on the land.

He said: “… the whole transaction was suspicious. UIA  failed to check land  values and the compensation amounts payable.”

Choudry said the German investors, NKG, had a duty to ensure that people were not exploited. But he reserved the harshest criticism for Nangwala and Rezida, UIA’s lawyers.

“Messrs Nangwala and Rezida deliberately withheld information in breach of their fiduciary duty and this deliberate omission was a dishonest conduct. Nangwala and Rezida had forsaken their loyalty to the Leaser and Lessee in the grant of the lease, when to their knowledge the title was lumbered with encumbrances,” Choudry said.